ONA, Fla. - Off the beaten path in the southwest corner of Hardee County, you'll find one man's vision of a castle in the middle of the Florida swamps.

In 1970, Howard Solomon purchased 90 acres of swampland in Ona, and began transforming it into a real kingdom for his family: Solomon’s Castle.

"Dad has been called the ‘Rembrant of Reclamation,’ the ‘DaVinci of Debris’ and the ‘Wizard of Odds and Ends’ and the ‘Savior of Salvage,’" said Alane Solomon, his daughter. "He would add a tower here, a turret here, and next thing you knew he had a castle. Every man’s home is his castle and for dad it was really true.”

That man, Solomon, built the castle in the middle of nowhere. He was a sculptor who had an eye unlike any other. In 2016, he passed away at the age of 81, but Alane has since taken over the estate.

"You are going to see amazing artwork. It’s amazing what he did here," said tour guide Cindy O'Connor.

There were additions along the way: the Boat in the Moat restaurant and a lighthouse for extra seating. But the main attraction draws visitors each year.

"He did not sketch anything out,” explained Ammy Pinna, a tour guide. “Whatever was on his mind. He had a start and finish. That’s the amazing works of this man.”

The first floor contains his galleries and artwork. The pieces are all made from recycled materials. Solomon covered his castle in offset aluminum printing plates that he got from a local newspaper. That’s what gives his castle the shine that continues to attract people.

"He was concentrated. He was quick at everything he did," said Alane.

"This was dad’s domain. This is where he made it all happen,” Alane said. “He would keep a chain across the door and guests would come up and peek in.”

His last handmade piece, a 10-foot-long turn of the century locomotive, sits as a reminder of his creativity.

"These are cans out of my kitchen from cream of chicken soup," said Alane.

One of the best parts that Solomon left behind is his heart and soul for the fortress, and it can still be felt today through his family.

"It's not just the castle that he built or the sculpting inside -- which each of those stand alone as a beautiful legacy -- but the whole little kingdom that he made here for us. That’s the true legacy," Alane said.

Solomon's family continues living out his legacy, passing on his passion for his "kingdom" from generation to generation.

"That's our main goal for the rest of our lives," said Alane.

Solomon's Castle is open to the public from Tuesday to Sunday from 10 a.m. to 4 p.m. Credit cards are not accepted, only cash and checks.

The Boat in the Moat Restaurant is open year-round. Admission is only required for the castle tour. 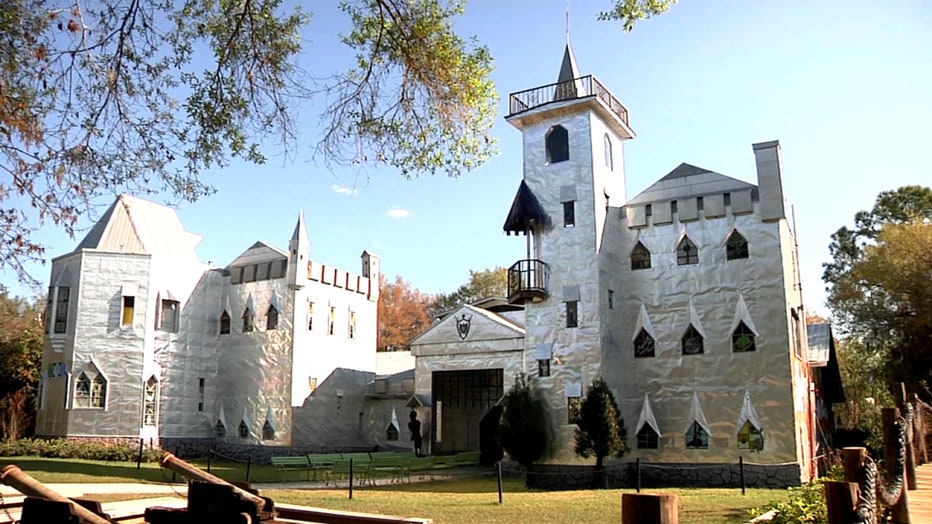