The one-acre area will be turned over to the county medical examiner and state archaeologist, who may keep possession of the land or turn it back over to the school district.

TAMPA, Fla. - School district officials say 145 coffins have been found on the grounds of King High School in Tampa.

Ground-penetrating radar was brought to the site in October, as geophysical technicians began searching for the lost Ridgewood Cemetery. It's believed to be the final resting place for more than 230 people, almost all of whom were African Americans.

Radar found approximately 145 graves buried 3 to 5 feet deep. The Hillsborough County school district plans to tear down the school's agricultural workshop, which may have been built on top of more graves.

Officials said because many of the people buried at the cemetery were infants or small children, their smaller coffins would be difficult to locate by scanning. Seventy-five years of decay could also mean some of the burials are no longer detectable.

The one-acre area will be turned over to the county medical examiner and state archeologist, who may keep possession of the land or turn it back over to the school district. 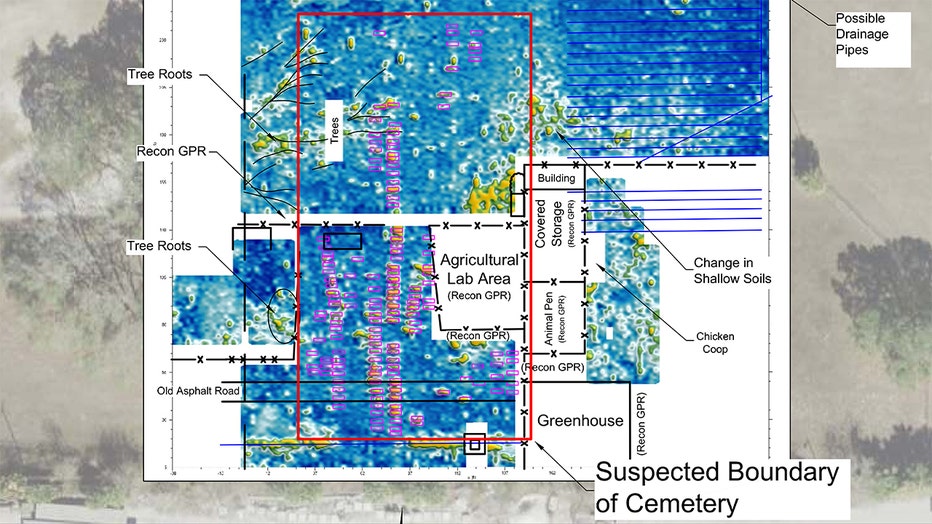 "If the land is turned back over to Hillsborough County Public Schools, our leaders will work with members of the Historical Response Committee to discuss proper ways to memorialize the individuals, how to best care for the space and learning opportunities for students at King High School and other schools," the district said in a news release.

"Somebody has got to right this wrong," said Yvette Lewis, president of the Hillsborough County NAACP. "This is not the first or the last [unmarked cemetery]. There are going to be more that are found. We have got to do something."