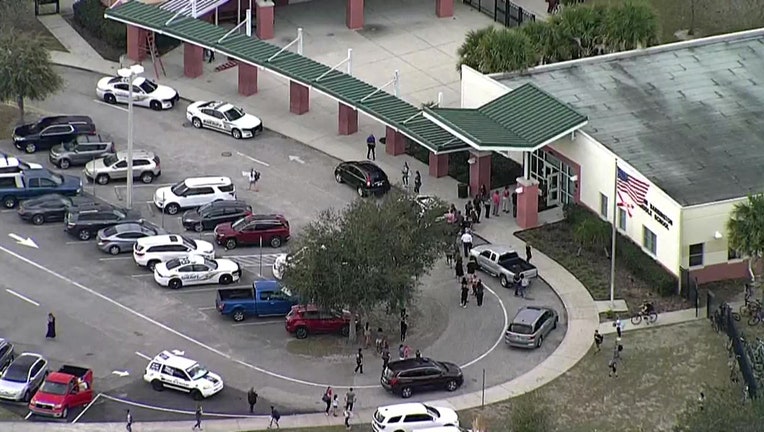 Deputies could be seen outside Barrington Middle School from SkyFOX.

LITHIA, Fla. - Deputies arrested a 15-year-old student for making a false claim about a gun on campus at a Lithia middle school on Wednesday.

The Hillsborough County Sheriff's Office said the teen is a student at Barrington Middle School.

According to investigators, the 15-year-old boy stole another student's cell phone inside the school's gymnasium, then went into the bathroom to call 911, claiming that a friend had a gun on campus.

The teen hung up the phone on a 911 dispatcher as she tried to gather more information, HCSO said.

The teen then threw the stolen cell phone in the toilet before leaving the bathroom.

Deputies said the false threat led to lockdowns at both Barrington Middle School and the adjacent Stowers Elementary School.

“Causing fear and panic is not funny, and as this student will, unfortunately, learn the hard way, making such a serious false claim comes with severe consequences,” Sheriff Chad Chronister said.

The teen faces several charges, including tampering with physical evidence, which is a felony, and three misdemeanor charges of misuse of the 911 system, disruption of a school function and petit theft.