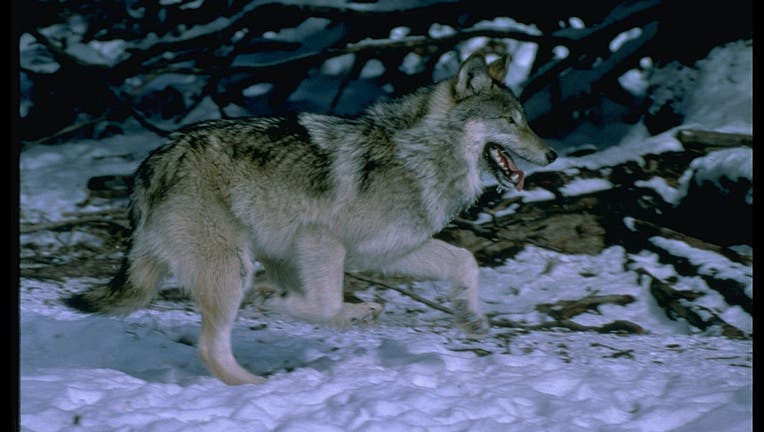 BILLINGS, Mont. (AP) - Twenty of Yellowstone National Park's renowned gray wolves roamed from the park and were shot by hunters in recent months — the most killed by hunting in a single season since the predators were reintroduced to the region more than 25 years ago, according to park officials.

Fifteen wolves were shot after roaming across the park's northern border into Montana, according to figures released to The Associated Press. Five more died in Idaho and Wyoming.

Park officials said in a statement to AP that the deaths mark "a significant setback for the species’ long-term viability and for wolf research."

One pack — the Phantom Lake Pack — is now considered "eliminated" after most or all of its members were killed over a two-month span beginning in October, according to the park.

An estimated 94 wolves remain in Yellowstone. But with months to go in Montana's hunting season —- and wolf trapping season just getting underway — park officials said they expect more wolves to die after roaming from Yellowstone, where hunting is prohibited.

Park Superintendent Cam Sholly first raised concerns last September about wolves dying near the park border. He recently urged Republican Montana Gov. Greg Gianforte to shut down hunting and trapping in the area for the remainder of the season.

Sholly cited "the extraordinary number of Yellowstone wolves already killed this hunting season," in a Dec. 16 letter to Gianforte released to AP under a freedom of information request.

Gianforte, an avid hunter and trapper, did not directly address the request to halt hunting in a Wednesday letter responding to Sholly.

"Once a wolf exits the park and enters lands in the State of Montana it may be harvested pursuant to regulations established by the (state wildlife) Commission under Montana law," Gianforte wrote.

Gianforte last year received a warning from a Montana game warden after trapping and shooting a radio-collared wolf about 10 miles (16 kilometers) north of the park without taking a state-mandated trapper education course.

In his response to Sholly, the governor said Montana protects against overhunting through rules adopted by the wildlife commission, which can review hunting seasons if harvest levels top a certain threshold.

For southwestern Montana, including areas bordering the park, that threshold is 82 wolves. Sixty-four have been killed in that region to date this season, out of 150 wolves killed statewide, according to Montana Fish, Wildlife and Parks.

The most recent wolf killing along the Montana-Yellowstone border happened on New Year's Day.

Wolf trapping in the area opened Dec. 21. Under new rules, Montana hunters can use bait such as meat to lure in wolves for killing and trappers can now use snares in addition to leghold traps.

"Allowances for trapping and especially baiting are a major concern, especially if these tactics lure wolves out of the park," Yellowstone spokesperson Morgan Warthin said.

Urged by Republican lawmakers, Montana wildlife officials last year loosened hunting and trapping rules for wolves statewide. They also eliminated longstanding wolf quota limits in areas bordering the park. The quotas, which Sholly asked Gianforte to reinstate, allowed only a few wolves to be killed along the border annually.

The original quotas were meant to protect packs that draw tourists to Yellowstone from around the world for the chance to see a wolf in the wild.

Montana's efforts to make it easier to kill wolves mirror recent actions by Republicans and conservatives in other states such as Idaho and Wisconsin. The changes came after hunters and ranchers successfully lobbied to reduce wolf populations that prey on big game herds and occasionally on livestock.

But the states' increased aggression toward the predators has raised concerns among federal wildlife officials. In September, the U.S. Fish and Wildlife Service said it would examine if federal endangered species protections should be restored for more than 2,000 wolves in northern U.S. Rockies states including Montana, Idaho and Wyoming.

Protections for the region's wolves were lifted a decade ago, based in part on assurances the states would maintain viable wolf populations.

A representative of the hunting industry said outfitters and guides support the preservation of wolves inside Yellowstone. But once the animals cross the boundary, sustainable hunting and trapping should be allowed, said Montana Outfitters and Guides Association Executive Director Mac Minard.

Minard questioned whether the 20 wolves killed so far this year after leaving Yellowstone should even be considered "park wolves."

"That just doesn't make sense," he said. "Why aren't they ‘Montana wolves’ that happened to go into the park?"

Marc Cooke with the advocacy group Wolves of the Rockies predicted a backlash against Gianforte and the state for not doing more to shield wolves leaving Yellowstone.

"People love these animals and they bring in tons of money for the park," Cooke said. "This boils down to the commercialization of wildlife for a small minority of special interest groups."