Five men who were acquitted of gang-raping a 14-year-old victim drew public outrage over the Spanish court’s ruling that the teenager had been unconscious and didn’t fight back during the act.

BARCELONA - Five men who were acquitted of gang-raping a 14-year-old victim drew public outrage over the Spanish court’s ruling that the teenager had been unconscious and didn’t fight back during the act.

The Barcelona-based court ruled Thursday that the men were guilty of the lesser crime of sexual abuse and sentenced them to 10-12 years and fined them 12,000 euros, which amounts to $13,300.

It ruled that their act could not be considered sexual assault since the girl was unconscious after consuming alcohol and drugs and so they did not need to use violence or intimidation, which is a requirement for a rape conviction in Spain.

The attack occurred in the town of Manresa, north of Barcelona, in October 2016 when the girl and the men went into an abandoned factory to drink. 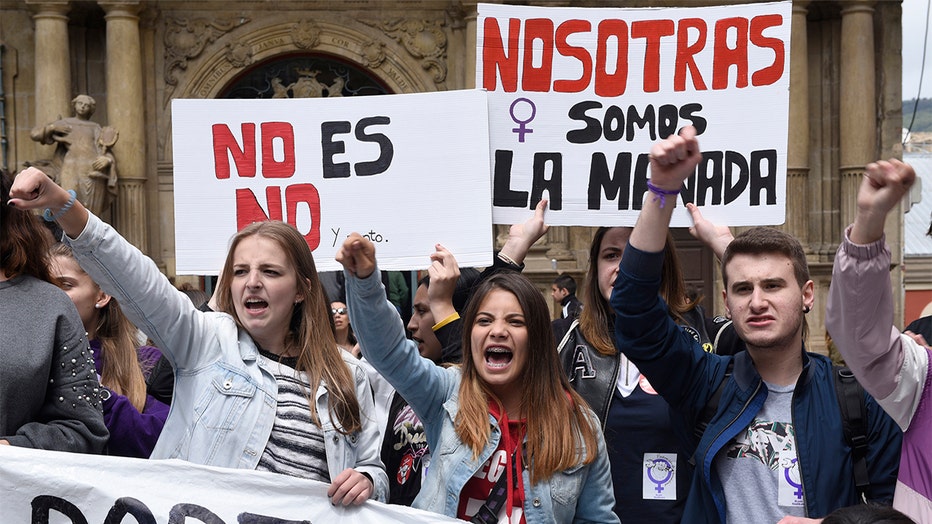 Demonstrators shout slogans in Pamplona on May 10, 2018 during a protest against the acquittal of five men accused of gang raping an 18-year-old woman. - The five men, in their late twenties, had been accused of raping a woman, then 18, at the entran

The men took turns having sex with the teenager after the party, but denied the charges, the court heard, according to Reuters.

The court said that since the victim was unconscious during the attack, she "could not accept or reject the sexual relations" and that the men "could carry out those sexual relations without the use of violence or intimidation.“

Spaniards, including women’s rights activists, called for a change in the law.

Spain's deputy prime minister, Carmen Calvo, said that while her government does not comment on court decisions it has set as a priority a modification in the law to make clear that consent is necessary for sexual relations to occur legally.

Barcelona Mayor Ada Colau and other left-wing politicians and feminist groups have condemned the ruling, as well as clamoring for the law to be strengthened in the victims' favor.

"Another senseless verdict by the patriarchal Justice that doesn't want to understand that only a Yes means Yes," Colau wrote on Twitter. "An unconscious 14-year-old girl was gang raped. I am not a judge and I don't know how many years of prison they deserve, (but) what I do know is that this is not abuse, it is rape!“

Marisa Soleto, of the feminist group Fundación Mujeres, said that "this is just one more piece of proof for the necessity to change the penal code.“

A similar 2017 ruling sparked widespread protests when five men were found guilty of sexually abusing a woman but acquitted of rape for an attack in Pamplona. Spain's Supreme Court later overruled the lower court and convicted them of rape.

The five men, who included a former policeman and a former soldier, shared videos of the incident in a WhatsApp group and joked about it afterwards, Reuters reported.

“It makes no sense that the law continues to distinguish between abuse and sexual assault,” Nuria Gonzalez, a Barcelona-based human rights lawyer, told the Reuters.

“Everything that happens after a woman says no, or says nothing at all, or which happens through violence and intimidation, goes against the will of the victim and is a sexual assault in which there is no room for mitigating or lower grades,” she added.

Spanish law requires that the plaintiff in a rape case must present evidence of intimidation or specific violence, the wire service reported.

“Any attack on sexual liberty should be considered violence,” Graciela Atencio, a women’s rights activist and director of the website Feminicidio.net, told Reuters.

“It’s important that they introduce the term rape into the penal code for all attacks that involve penetration and that any sexual behavior without consent be considered sexual violence.”