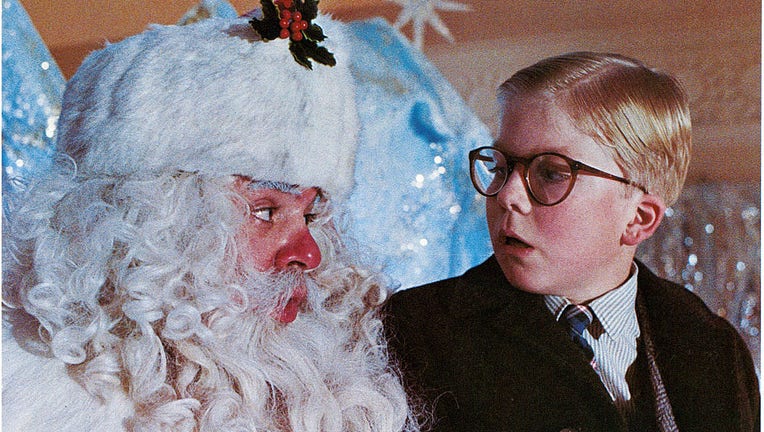 FILE - Peter Billingsley sits on Santa's lap in a scene from the film "A Christmas Story," 1983. (Photo by Metro-Goldwyn-Mayer/Getty Images)

LOS ANGELES - Move over, "Hocus Pocus 2." The teaser trailer for HBO Max’s upcoming sequel to the 1983 classic "A Christmas Story" has been released, giving fans a partial glimpse of an adult Ralphie.

Peter Billingsley, who played protagonist Ralphie, returns to his iconic role in the new film, called "A Christmas Story Christmas." The 30-second preview offers other nods to the original Christmas comedy, including familiar sets and iconic lines — such as from the "fragile" leg lamp scene. It ends with a quick shot of Ralphie putting on glasses and smiling.

In the original film, Ralphie is a kid growing up in the 1940s with only one Christmas wish: to get a Red Ryder BB rifle. Every year, TNT and TBS air 24-hour marathons of the iconic movie on Christmas Eve.

"A Christmas Story Christmas" will take place in the 1970s, when Ralphie takes his own family to his childhood home in an attempt to resurrect the magical Christmas he had as a child, according to Variety.

Other actors reprising their roles from the original Christmas film include Zack Ward, playing the former town bully Scut Farkus who is now a police officer, as well as R.D. Robb and Scott Schwartz as the double dog darer and the recipient of the dare who fatefully put his tongue on the frozen pole, the outlet reported.

Ian Petrella, who played Randy Parker, the youngest member of the Parker household, is also returning.

The singer first released the song in 1994 as part of her holiday album.

"A Christmas Story Christmas," which debuts on Nov. 17, is not the first attempt at a sequel.

PBS released two made-for-TV films titled "The Star-Crossed Romance of Josephine Cosnowski" and "Ollie Hopnoodle’s Haven of Bliss," Variety noted. There were also the films "It Runs in the Family" in 1994 and "A Christmas Story 2" released in 2012.

RELATED: 'The Grinch' horror movie 'The Mean One' coming this Christmas, reports say