Conspiracy theorist Alex Jones, host of Infowars, testified on Aug. 2, 2022, during his defamation trial for claiming the Sandy Hook Elementary School shooting was a hoax. Jones says that at the time, he genuinely thought the incident was, but now believes that it's "100% true."

AUSTIN, Texas - Conspiracy theorist Alex Jones testified Wednesday that he now understands it was irresponsible of him to declare the Sandy Hook Elementary School massacre a hoax and that he now believes it was "100% real."

Speaking a day after the parents of a 6-year-old boy who was killed in the 2012 attack testified about the suffering, death threats and harassment they've endured because of what Jones has trumpeted on his media platforms, the Infowars host told a Texas courtroom that he definitely thinks the attack happened.

"Especially since I’ve met the parents. It’s 100% real," Jones said at his trial to determine how much he and his media company, Free Speech Systems, owe for defaming Neil Heslin and Scarlett Lewis. Their son Jesse Lewis was among the 20 students and six educators who were killed in the attack in Newtown, Connecticut, which was the deadliest school shooting in American history.

But Heslin and Lewis said Tuesday that an apology wouldn’t suffice and that Jones needed to be held accountable for repeatedly spreading falsehoods about the attack. They are seeking at least $150 million in the trial, which was held to determine how much Jones and his media company, Free Speech Systems, must pay for defaming Heslin and Lewis.

Jones — who has portrayed the lawsuit against him as an attack on his First Amendment rights — told the jury that any compensation above $2 million "will sink us," but added: "Ï think it’s appropriate for whatever you decide what you want to do."

Testimony in the trial, which is in its second week, concluded at around midday and closing arguments were expected to begin Wednesday afternoon. 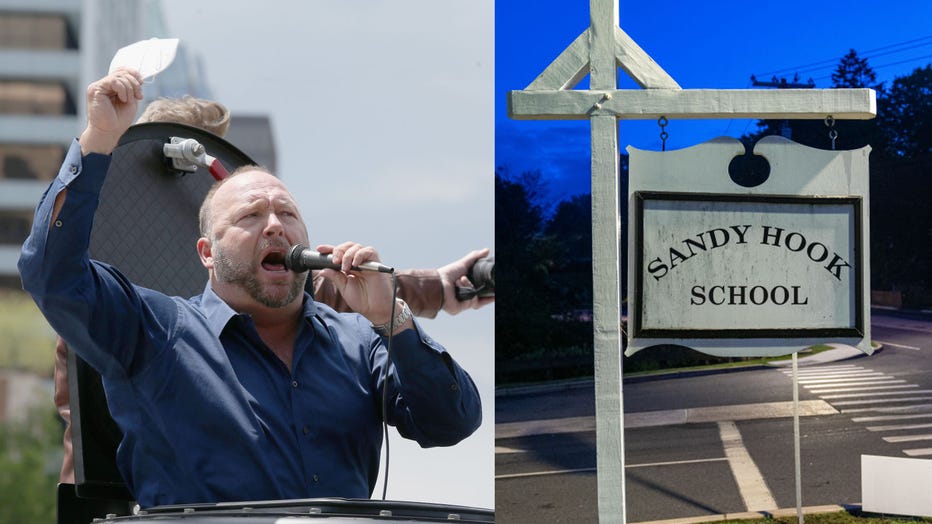 FILE IMAGES - (L) Alex Jones attends a protest outside the Texas State Capitol during a rally calling for the reopening of Austin and Texas on April 25, 2020, in Austin, Texas. (Photo by Gary Miller/Getty Images) (R) A sign board is located 1/4 mile

Jones was the only person who testified in his own defense. His attorney asked him if he now understands it was "absolutely irresponsible" to push the false claims that the massacre didn’t happen and no one died.

Jones said he does, but added, "They (the media) won’t let me take it back."

He also complained that he’s been "typecast as someone that runs around talking about Sandy Hook, makes money off Sandy Hook, is obsessed by Sandy Hook."

Under a withering cross-examination from attorney Mark Bankston, Jones acknowledged his history of raising conspiracy claims regarding other mass tragedies, from the Oklahoma City and Boston Marathon bombings to the mass shootings in Las Vegas and Parkland, Florida.

Bankston then went after Jones’ credibility, showing an Infowars video clip from last week when a host — not Jones — claimed the trial was rigged and featuring a photo of the judge in flames. Then came another clip of Jones asking if the jury was selected from a group of people "who don’t know what planet" they live on. Jones said he didn’t mean that part literally.

Bankston said Jones hadn’t complied with court orders to provide text message and emails for pretrial evidence gathering. Jones said, "I don’t use email," then was showed one gathered from another source that came from his email address. He replied: "I must have dictated that."

At one point, Bankston informed Jones that his attorneys had mistakenly sent Bankston the last two years' worth of texts from Jones’ cellphone.

Alex Jones' attorney accidentally sent all his text messages to opposing attorney: 'Do you know what perjury is?'

During Alex Jones' civil trial, he learns his attorney accidentally sent the last two years' worth of his text messages to Mark Bankston, the attorney who's representing the parents of Sandy Hook.

The attorney also showed the court an email from an Infowars business officer informing Jones that the company had earned $800,000 gross in selling its products in a single day, which would amount to nearly $300 million in a year. Jones said that was the company’s best day in sales.

Jones' testimony came a day after Heslin and Lewis told the courtroom in Austin, where Jones and his companies are based, that Jones and the false hoax claims he and Infowars pushed made their lives a "living hell" of death threats, online abuse and harassment.

They led a day of charged testimony Tuesday that included the judge scolding the bombastic Jones for not being truthful with some of what he said under oath.

In a gripping exchange, Lewis spoke directly to Jones, who was sitting about 10 feet away. Earlier that day, Jones was on his broadcast program telling his audience that Heslin is "slow" and being manipulated by bad people.

"I am a mother first and foremost and I know you are a father. My son existed," Lewis said to Jones. "I am not deep state ... I know you know that ... And yet you’re going to leave this courthouse and say it again on your show."

At one point, Lewis asked Jones: "Do you think I’m an actor?"

"No, I don’t think you’re an actor," Jones responded before the judge admonished him to be quiet until called to testify.

Alex Jones compares himself to Oprah

Alex Jones, testifying in his defamation trial for claiming the Sandy Hook school shooting was a hoax, was asked about his career and how his radio show was formed. At one point Jones compared his show to what Oprah Winfrey was doing with her talk show.

Heslin told the jury about holding his son with a bullet hole through his head, even describing the extent of the damage to his son’s body. A key segment of the case is a 2017 Infowars broadcast that said Heslin didn’t hold his son.

The jury was shown a school picture of a smiling Jesse taken two weeks before he was killed. The parents didn’t receive the photo until after the shooting. They described how Jesse was known for telling classmates to "run!" which likely saved lives.

Jones initially took the stand later Tuesday. At one point the judge sent the jury out of the courtroom and strongly scolded Jones for telling the jury he had complied with pretrial evidence gathering even though he didn’t and that he is bankrupt, which has not been determined. The plaintiffs' attorneys were furious about Jones mentioning he is bankrupt, which they worry will taint the jury's decisions about damages.

"This is not your show," Judge Maya Guerra Gamble told Jones. "Your beliefs do not make something true. You are under oath."

Last September, the judge admonished Jones in her default judgment over his failure to turn over documents requested by the Sandy Hook families. A court in Connecticut issued a similar default judgment against Jones for the same reasons in a separate lawsuit brought by other Sandy Hook parents.

At stake in the trial is how much Jones will pay. The parents have asked the jury to award $150 million in compensation for defamation and intentional infliction of emotional distress. The jury will then consider whether Jones and his company will pay punitive damages.

Jones has already tried to protect Free Speech Systems financially. The company, which is Infowars' parent company, filed for federal bankruptcy protection last week. Sandy Hook families have separately sued Jones over his financial claims, arguing that the company is trying to protect millions owned by Jones and his family through shell entities.