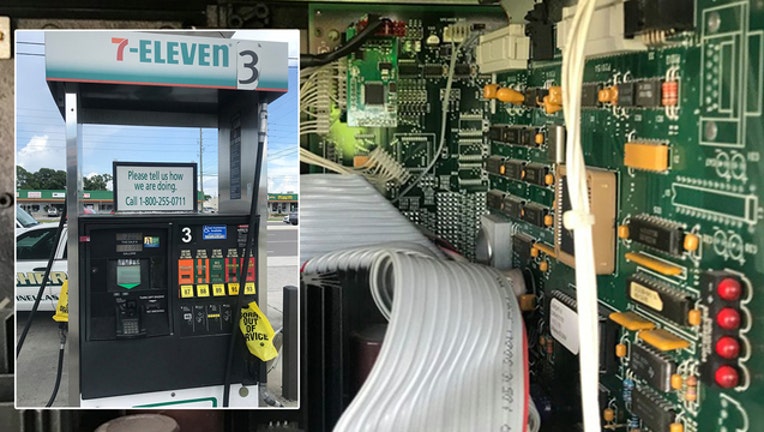 SEMINOLE, Fla. (FOX 13) - A second Bluetooth skimmer was found in Pinellas County within a week – this time at a gas station in Seminole.

Pinellas County deputies are warning drivers after locating the device on "Pump 3" at the 7-Eleven, located at 7612 Starkey Road in Seminole. The Bluetooth capability allows thieves to be nearby – even across the street – can obtain your card information without returning to the gas pump.

Deputies are asking consumers who used the gas pump to review their bank or credit card statements for possible fraud. Detectives said they recommend paying inside the store to avoid falling victim to gas pump skimmers.

Anyone who thinks they could be a victim is asked to call the Pinellas County Sheriff's Office's non-emergency number 727-582-6200.

Earlier in the week, Clearwater police located a Bluetooth skimming device inside Pump 9 at the 7-Eleven gas station on North Belcher Road. Employees contacted the agency after they couldn't open the pump. Anyone with information on this specific incident is asked to call Clearwater police at 727-562-4242.

As of last month, the Florida Department of Agriculture and Consumer Services said 720-plus skimmers were found statewide this year, including 34 in Hillsborough County and 29 in Pinellas County.

There are signs to look out for in order to protect yourself.