A giant pumpkin has been decorated in a way that may interest “Star Wars” fans.

The gourd, spanning nearly 10 feet across and weighing 451 pounds, has captured the attention of Dublin, Ohio, residents for its resemblance to “Baby Yoda," or “The Child," from the Disney+ series, “The Mandalorian.”

RELATED: Full moon to shine on Halloween for the first time since 1944

The pumpkin, which has been dubbed as “Baby YodaKin,” was designed by Jeanette Paras, who is an artist that has decorated over-the-top pumpkins for more than 30 years at Paras Pumpkins. 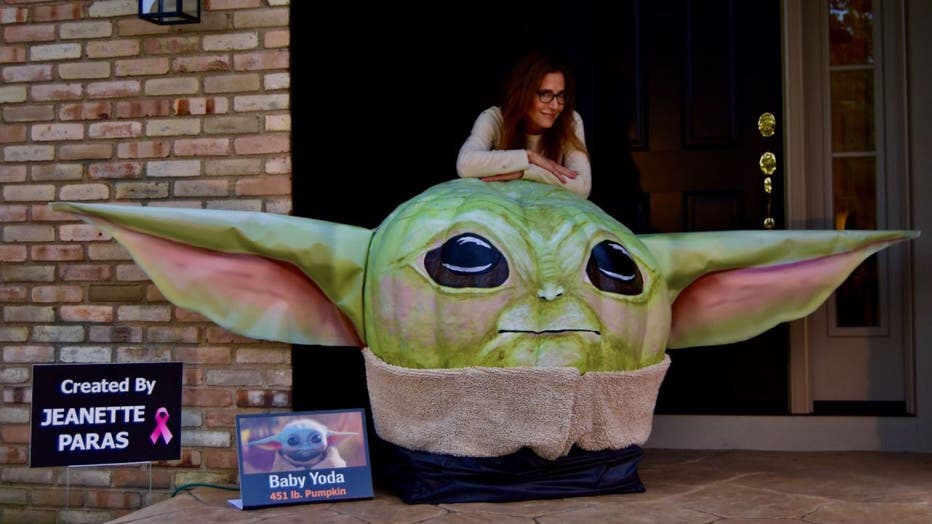 Paras unveiled Baby YodaKin on Monday, which reportedly measures 40 inches in diameter and has two 39-inch ears tacked on, according to a company press release.

“I want people to look at Baby YodaKin, smile, appreciate his cuteness and enjoy a moment away from everything going on in the world today,” Paras said in a statement. ”We’ve been cooped up for months, watching bad news every day it seems. I considered 'pumpkinizing' the coronavirus, the presidential candidates, [Ruth Bader Ginsburg], Dr. Fauci and others. To me, Baby Yodakin represents the mental health break we need.”

The 451-pound pumpkin that was used to create Baby YodaKin was grown by Scott Kulpa of Galena, Ohio – a village that is around 20 miles away from the city of Dublin.

Baby YodaKin is far from Paras’ first attempt at a “celebrity pumpkin.” She has decorated several pumpkins after presidents, politicians, entertainers, athletes and other notable celebrities.

Some famous faces Paras has decorated giant pumpkins to look like include Donald Trump, Kim Jong Un and Kanye West.

“When I crack up because of one of my giant celebrity pumpkins [ideas], that’s when I know I’ve picked the right subject,” Paras explained.

“It’s so much fun to do this every year. I love the reactions I get from my neighbors and people who stop by our house,” she added. “People come by to take pictures and now even the media is caught up in the suspense of who gets ‘pumpkinized.’”