LOS ANGELES - On Saturday, Joe Biden won the presidency, defeating incumbent President Donald Trump in the 2020 race for the White House, according to projections by the Associated Press and FOX News. Biden’s projected win catapults California Sen. Kamala Harris into a new role presiding over the Senate, with the ability to break any ties.

Thirty-five Senate seats were up for grabs in the 2020 election. In the wake of Election Day, the Senate stands split at 48-48. But Republicans lead in uncalled races in Alaska and North Carolina. The ultimate Senate balance of power is likely to come down to what happens in the Georgia runoffs.

House Speaker Nancy Pelosi addressed the state of the 2020 presidential election during her weekly news conference on Nov. 6.

With two Senate seats up for grabs in Georgia, there is a lot at stake for both parties. Results will likely determine which political party controls the Senate.

Georgia’s Senate race between Sen. Kelly Loeffler and Democratic opponent Raphael Warnock is already set for a runoff, which will take place on Jan. 5.

U.S. Sen David Perdue was sitting under the 50% threshold required to win the November contest against Democratic challenger Jon Ossoff outright. But votes continued to be counted in the Peach State as of Saturday. 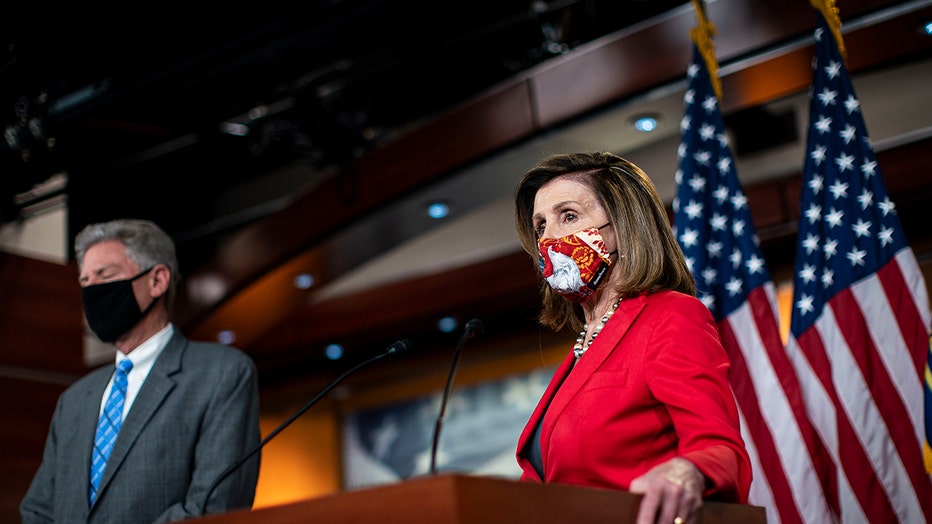 NOVEMBER 06: Speaker of the House Nancy Pelosi (D-CA) talks to reporters as House Energy and Commerce Committee Chairman Frank Pallone (D-NJ), listens, during her weekly news conference in the House Visitors Center at the U.S. Capitol on November 6,

Democrats haven't won a U.S. Senate race in Georgia in two decades, but Republican dominance has been slipping. Democrat Stacey Abrams narrowly lost the race for governor in 2018, and Biden held a slim lead over Trump on Saturday in Georgia, just hours after Joe Biden and Kamala Harris' projected White House win.

Democrats need a net gain of three seats for a 51-50 majority, or a net gain of two for a 50-50 split. A 50-50 Senate vote split requires the vice president to break the tie for any matters on the floor.

Meanwhile, Democrats were projected to retain control of the House, but it appeared that their expected gains aren’t happening.

Their current 232-197 majority could shrink, meaning that Speaker Nancy Pelosi and her Democratic leadership team are going to have less of a margin of error to be able to pass legislation.

Incumbent Democratic Sen. Doug Jones was defeated by former college football coach Tommy Tuberville who recaptured a U.S. Senate seat for Republicans in the state. Republicans had made recapturing the once reliably conservative seat a priority in 2020.

Tuberville, who has never held public office and last coached four years ago, aligned himself closely with President Donald Trump and declared in the primary campaign: “God sent us Donald Trump.”

Jones had won the seat during a 2017 special election in which GOP Senate candidate Roy Moore was publicly accused of sexual misconduct involving young women decades ago. The GOP hammered Jones over his vote to convict Trump in the Senate impeachment trial earlier this year.

Former astronaut and Democrat Mark Kelly defeated incumbent Republican Sen. Martha McSally, flipping a critical Senate seat. An October poll from Marist College had Kelly ahead with 52% of likely voters and McSally with 46% of likely voters.

Kelly was pitched by Democrats as a centrist in one of the country’s most expensive campaigns. He will finish late Sen. John McCain’s term, which ends in 2022. McSally was appointed to the seat by Gov. Doug Ducey after she was defeated by Kyrsten Sinema in the 2018 election for the seat that was vacated by Jeff Flake.

Incumbent Republican Sen. Cory Gardner lost to the state’s former Gov. John Hickenlooper, according to a FOX News race call. A Morning Consult poll had Hickenlooper up by 10% with likely voters.

Georgia, long a Republican stronghold — but one with rapidly changing demographics — will be the site of two runoffs on Jan. 5 to settle which party would control the Senate.

That was cemented Friday evening when Democrat Jon Ossoff and Georgia Sen. David Perdue narrowly advanced to a second round after three days of vote counting. Georgia law requires an outright majority to win a statewide office.

Should Democrats win them, Biden would be dealing with a majority in the Senate, increasing his chances for passing legislation and securing major appointment confirmations. Otherwise, Senate Majority Leader Mitch McConnell, a Kentucky Republican, could wield the power to block Biden.

In Georgia, two runoff elections mean a campaign on an almost national scale, with tens of millions of dollars spent by both sides.

“I can’t tell you how important it is that we flip the United States Senate. There’s no state more consequential than Georgia in that fight,” Biden declared at an Atlanta rally on Oct. 27, when he campaigned alongside Democratic Senate hopefuls Ossoff and Raphael Warnock.

Incumbent Republican Sen. Joni Ernst defeated Democrat challenger Theresa Greenfield in one of the most contested races of the 2020 campaign.

The race between Ernst and Greenfield, a real estate developer, was tight throughout with the Republican senator pulling ahead in the week leading up to the election, FOX News reported.

Incumbent Republican Sen. Susan Collins wants to keep hold of her seat amid a challenge from state lawmaker Sarah Gideon. A Colby College poll showed Gideon with 47% of likely voters and Collins with 43%. There are four names on the ballot.

Fundraising efforts also reflected the competitiveness of the race. According to the Associated Press, Bullock raised $28 million in the third quarter, the most for any Montana statewide candidate in a single three-month period. Daines raised $11.5 million in the same timeframe.

Cunningham did well in fundraising, bringing in $28 million in the third quarter, more than any other North Carolina politician, according to his campaign. The Associated Press reported that Tillis raised $6.6 million in the same time period.

Incumbent Republican Sen. Lindsey Graham fended off a challenge by Democrat Jaime Harrison retaining his seat in a narrow race, according to a race projection by FOX News.

A mid-October New York Times/Siena poll showed Graham with 46% of the vote and Harrison with 40% of the vote. A late September poll from Quinnipiac University showed the two men in a dead heat — both with 48% of the vote. 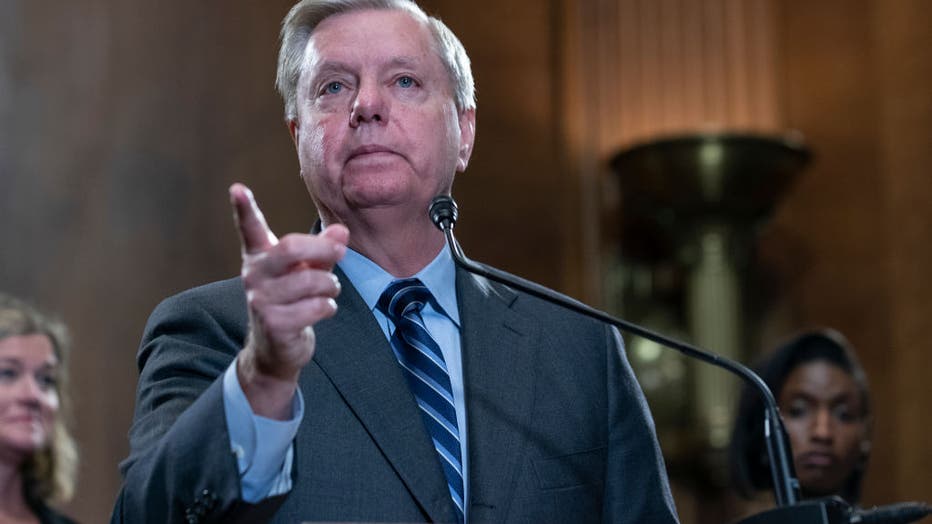 Several factors, including the COVID-19 pandemic, played into making the Senate races so competitive in 2020. Democrats have heavily criticized President Donald Trump and Republicans in their approach to handling the crisis, and they hope to block Republican efforts to repeal the Obama-era Affordable Care Act.

David Flaherty, a Colorado-based Republican pollster, told the Associated Press that his surveys are showing that COVID-19 will be “the most likely issue many voters will make their decisions on.”

“In more places in the country than not, the president is not getting good marks” on that, Flaherty said, and it’s damaging Senate GOP candidates, “especially those in lockstep with the president.”

There were multiple key House races to watch on Election Day:

It’ll be a rematch between Incumbent Democrat TJ Cox and Republican David Valadao. Cox beat out Valadao in 2018. A September poll showed Valadao with 49% of likely voters and Cox with 38%.

Greene will be replacing Republican Tom Graves, who resigned on Oct. 4.

Drew, the Democrat-turned Republican who switched parties, won reelection and held on to his seat.

The Associated Press called the race for Bowman, who beat Conservative Party candidate Patrick McManus. There was no Republican on the district’s ballot, which includes part of the Bronx and lower Westchester County.

Incumbent Democrat Max Rose hopes to fend off Republican Nicole Malliotakis. However, it won’t be easy given the pro-Trump area.

Republican Yvette Herrell won election to the U.S. House in New Mexico’s 2nd Congressional District, beating incumbent Rep. Xochitl Torres Small, who tried to hold onto her seat as she vied against Herrell.

This was a rematch, as Torres Small formerly ran against Herrell, defeating her by an extremely narrow margin of less than 4,000 votes.The district traditionally leans Republican, and Trump won the district by 10 points in 2016 over Hillary Clinton.

Republican Madison Cawthorn was called the winner of the U.S. House seat in western North Carolina Tuesday that was vacated by White House Chief of Staff Mark Meadows.

Cawthorn, 25, becomes the youngest member elected to Congress since the late 1700s.

The candidate -- who first catapulted to GOP stardom after speaking at the Republican National Convention in August, getting up from his wheelchair at one point on stage -- defeated incumbent U.S. Rep. Moe Davis, D-N.C., to capture the 11th Congressional District seat, according to the Associated Press.

Peterson had withstood a Republican wave before, but political insiders believed this was going to be his toughest fight yet given that his district was turning deep red — and they were right.

Peterson, the chairman of the House Agriculture Committee, was seeking his 16th term.

Incumbent Democrat Kendra Horn was up against Republican challenger Stephanie Bice. A Change Research poll showed both candidates tied with 47% of likely voters.

California now has a Senate seat to fill

Once Vice President-elect Sen. Kamala Harris resigns her seat, the responsibility to fill it will fall on Democratic Gov. Gavin Newsom.

Discussions about prospective candidates are already underway, according to FOX News.

“The new appointee would serve out the remainder of Harris's term through 2022 -- which is also the year of the next statewide general election. The governor's seat will also be up for grabs in that vote, and Newsom's pick could influence his chances for re-election,” FOX News reported.

The Associated Press, FOX News, and FOX 5 Atlanta contributed to this story.