BARTOW, Fla. - There is no ball drop, not even a countdown. In one Polk County city, the new year is welcomed by torching old pine trees. The annual Christmas tree burn has been held in Bartow since 1936.

Master of ceremonies S.L. Frisbie said it started thanks to a community leader who was a volunteer firefighter, and knew dried out trees were dangerous to keep inside.

“He started the rumor, the superstition if you please, that it was bad luck to have a Christmas tree in your home after New Year’s Eve,” Frisbie told FOX 13.

He added, "Back in 1936 they didn’t have these nice Christmas tree stands that hold water; you made a stand by two-by-fours."

So the season’s discarded holiday trees were gathered, piled up, and became bonfire fuel.

"We’ve done it ever since then, most years, not all years, and why do we do it? Because it’s fun," Frisbie said.

The community rings in the new year with song, prayer and a large inferno. 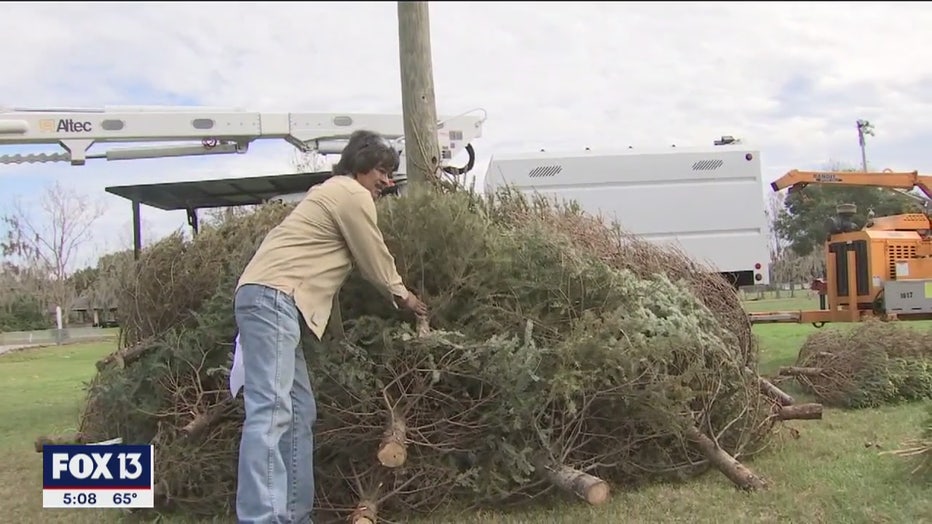 “We have two firefighters out here every year doing double duty, number one they’re here to keep the fire under control, but also to set it,” said Frisbie. “So when we start singing Auld Lang Syne, then two firefighters come up and light the base of the tree.”

In past years, the pile of dry trees has been stacked around a pole as high as 45 feet.  This year’s pole is much shorter since we’re told the amount of trees has steadily dwindled.

“Now with the growing popularity of artificial trees we no longer have the number of trees that we used to. but we still make a pretty big pile and have a lot of fun,” Frisbie said.

After picking up about 70 trees left curbside by residents, and a donation from a tree lot, this year's pile of pines is sure to be a big blaze.

The dried-out trees to do not take much to torch, and in about 15 minutes there is usually only embers left.

“It’s a lot of fun, it has no redeeming moral values other than an opportunity for people to get together with some of their friends and neighbors on New Year’s Eve, and we would love to have them come out and celebrate with us,” said Frisbie.