MIAMI, Fla. - An exceptionally busy Atlantic hurricane season was churning along Saturday morning as the Texas coast prepared for a tropical storm that's forecast to strengthen into a hurricane before breaching its shores in the week ahead.

Tropical Storm Beta was brewing in the Gulf of Mexico, 290 miles (470 kilometers) east of the mouth of the Rio Grande, the U.S. National Hurricane Center said in an advisory. The system was forecast to become a hurricane on Sunday and had already triggered a hurricane watch from Port Aransas, Texas, to High Island, Texas.

Also in effect were a storm surge watch from Port Mansfield, Texas to Cameron, Louisiana; and a tropical storm watch from south of Port Aransas to the mouth of the Rio Grande, and east of High Island to Morgan City, Louisiana.

Forecasters were predicting up to 4 feet (1.2 meters) of storm surge along parts of the Texas coast that included Baffin Bay, Corpus Christi Bay, Galveston Bay and more. Wind, heavy rainfall and life-threatening surf and rip current conditions were also expected with the storm. 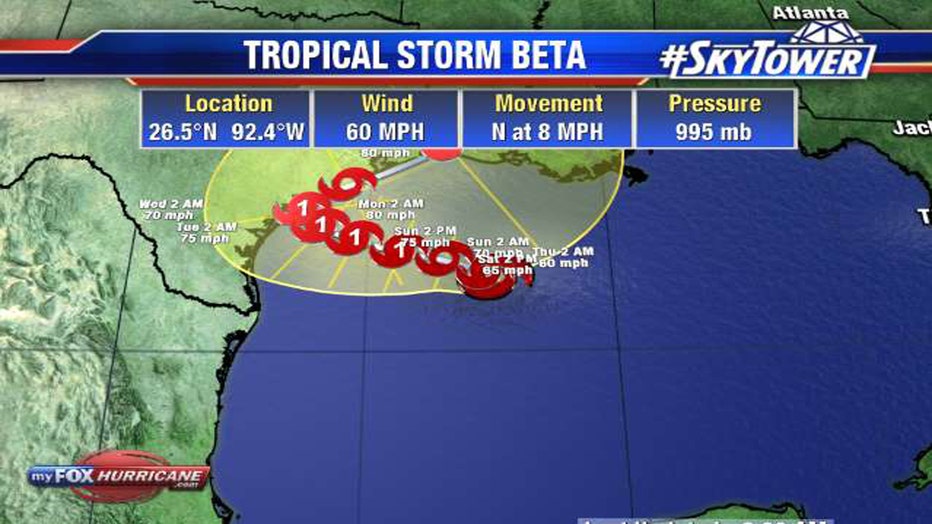 Alpha dissipated Friday night after bringing rain to Portugal. Tropical Storm Wilfred remained at sea but was not expected to impact land.