President Biden delivered remarks on Wednesday and stressed the time is now to act on his infrastructure plan. Biden said that he plans to raise the corporate tax rate and eliminate deductions that corporations are receiving for off-shore jobs.

PITTSBURGH - President Joe Biden on Wednesday revealed his proposal to re-engineer the country’s infrastructure that would require $2 trillion in spending over eight years but could create millions of jobs — and how he intends to cover its lofty price tag.

In the same city he launched his presidential bid, Biden landed in Pittsburgh, Pennsylvania, to introduce his $2.25 trillion plan for America’s infrastructure as well as a down payment to combat climate change that would be funded by higher corporate taxes.

Biden has committed $621 billion towards rebuilding the nation’s roads, bridges and highways, as well as installing electric vehicle charging stations and other transportation infrastructure. The spending would push the country away from internal combustion engines that the auto industry views as an increasingly antiquated technology.

Speaking at a carpenters union training center in Pittsburgh, Biden drew comparisons between his hard-hatted proposed transformation of the U.S. economy and the space race — and promised results as grand in scale as the New Deal or Great Society programs that shaped the 20th century.

"It’s not a plan that tinkers around the edges," Biden said. "It’s a once-in-a-generation investment in America unlike anything we’ve seen or done since we built the interstate highway system and the space race decades ago. In fact, it’s the largest American jobs investment since World War II. It will create millions of jobs, good-paying jobs."

White House officials say the spending would generate those jobs as the country shifts away from fossil fuels and combats the perils of climate change. It is also an effort to compete with the technology and public investments made by China, which has the world’s second-largest economy and is fast gaining on the United States’ dominant position.

"I’m convinced that if we act now, in 50 years people are going to look back and say this is the moment when America won the future," Biden said.

But the scope of his proposal far exceeds transportation. 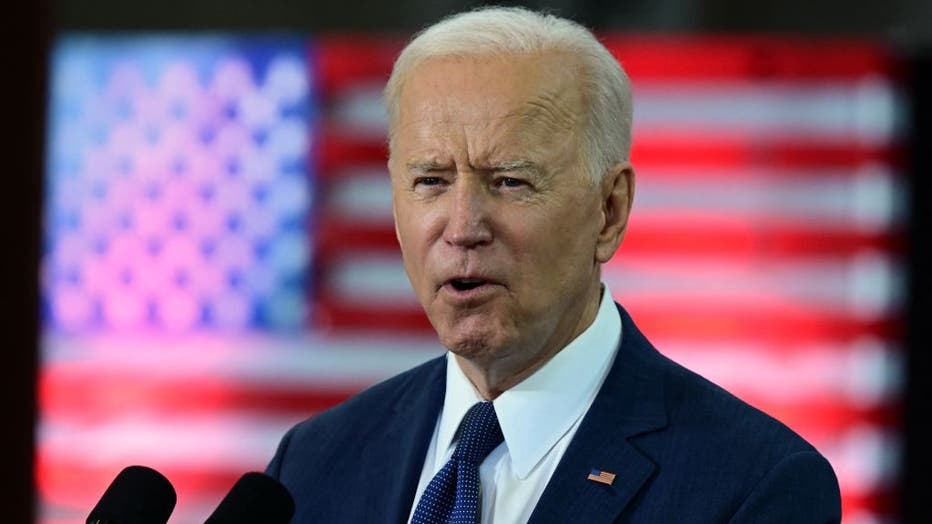 An additional $111 billion would go to replace lead water pipes and upgrade sewers. Broadband internet would blanket the country for $100 billion. Separately, $100 billion would upgrade the power grid to deliver clean electricity. Homes would get retrofitted, schools modernized, workers trained and hospitals renovated under the plan, which also seeks to strengthen U.S. manufacturing.

"I’m convinced that if we act now, in 50 years people are going to look back and say this is the moment when America won the future," Biden said.

The higher corporate taxes would aim to raise the necessary piles of money over 15 years and then reduce the deficit going forward. In doing so, Biden would undo the action by Trump and congressional Republicans to lift the corporate tax rate to 28% from the 21% rate set in a 2017 overhaul.

Critics are concerned additional new spending could prove detrimental to interest rates and the national debt.

In order to pay for this legislation, Biden also proposed what is being called his "Made in America Tax Plan." The White House says funding the first $2 trillion for construction and "hard" infrastructure projects would be a hike on corporate taxes that would raise the necessary sum over 15 years and then reduce the deficit going forward. It would undo a policy achievement of the Trump administration by lifting the corporate tax rate to 28% from the 21% rate set in a 2017 overhaul.

To keep companies from shifting profits overseas to avoid taxation, a 21% global minimum tax would be imposed. The tax code would also be updated so that companies could not merge with a foreign business and avoid taxes by moving their headquarters to a tax haven. And among other provisions, it would increase IRS audits of corporations.

Biden hopes to pass an infrastructure plan by summer, which could mean relying solely on the slim Democratic majorities in the House and the Senate. This means if Republicans can’t convince moderate Democrats to vote against Biden’s proposal, it can pass along party lines.

"I look forward to working with President Biden to pass a big, bold plan that will drive America forward for decades to come," Schumer said at an event in Buffalo.

Rep. Peter DeFazio, chairman of the House Oversight and Transportation Committee, wants to have a highway and transit bill passed out of the committee in May. He called Biden’s plan "visionary and exactly what people across this country have been asking for from national leaders for years, even decades."

On the other hand, some Democratic lawmakers fear Biden's plan does too little over eight years. Others see it as a chance to tinker by repealing the $10,000 taxpayer limit on deducting state and local taxes, or SALT, that was instituted under former President Donald Trump.

"I can only vote for a bill that has meaningful tax impact for my constituents if it addresses the SALT cap," tweeted Rep. Tom Malinowski, D-N.J.

Fresh off of a $1.9 trillion coronavirus relief package signed into law earlier this month and other stimulus bills that passed last year, 21 Senate Democrats this week also pressed Biden to consider including recurring direct payments and extended jobless benefits in the infrastructure plan.

"It seems like President Biden has an insatiable appetite to spend more money and raise people’s taxes," Rep. Steve Scalise of Louisiana, the GOP whip, said in an interview.

"This is not going to be apparently an infrastructure package," said McConnell, who also said Biden called him about the plan on Tuesday. "It’s called infrastructure. But inside the Trojan horse, there’s going to be more borrowed money and massive tax increases on all the productive parts of our economy."

The business community favors updating U.S. infrastructure, but it dislikes higher tax rates. U.S. Chamber of Commerce Executive Vice President and Chief Policy Officer Neil Bradley, said in a statement that "we applaud the Biden administration for making infrastructure a top priority. However, we believe the proposal is dangerously misguided when it comes to how to pay for infrastructure."

The Business Roundtable, a group of CEOs, would rather have infrastructure funded with user fees such as tolls.

Separately, Biden will propose in the coming weeks a series of soft infrastructure investments in child care, family tax credits and other domestic programs, another expenditure of roughly $2 trillion to be paid for by tax hikes on wealthy individuals and families, according to people familiar with the proposal.

"No one making under $400,000 will see their federal taxes go up. Period," Biden said Thursday.

The Associated Press contributed to this report. It was reported from Atlanta and Cincinnati.