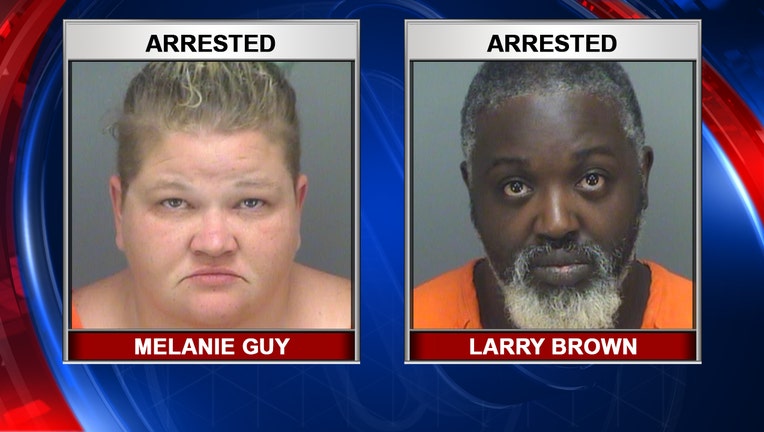 LARGO, Fla. - A boy found sleeping outside of an shopping plaza in Largo in the middle of the night told police he was afraid to go home because he didn't want to get hit anymore.

Bystanders alerted Largo police about a child sleeping next to a shopping plaza around 1 a.m. Monday. According to police, the 13-year-old boy told officers he ran away from home because he was scared to get hit again. The child said he had been regularly abused by 36-year-old Melanie Guy, also known as Melanie Anne Fulton Brown.

According to investigators, the boy said he would be woken up between 1 a.m. and 3 a.m. during the week by Guy, who would make him clean the house. The boy told police he would be punished if he fell asleep by being forced to run in place for 15 minutes and would be beaten with a back scratcher.

An arrest affidavit for Guy's husband, 44-year-old Larry Brown, said he also abused the boy by beating him with a rubber belt.

When officers entered the house, they found filthy conditions inside. The arrest affidavit said the child was "forced to sleep with 1,000 of roaches and dog feces throughout the home."

Investigators said the boy was taken to All Children's Hospital to receive treatment for several marks and bruises on his back and legs, which were consistent with his story.

While the boy was being evaluated at the hospital, medical staff said he was in the 10th percentile for his age based off of his weight.

Officers in the house found padlocks on a refrigerator and freezer. There was also a lock on a cabinet, which had food for the boy inside.

Guy told police the locks were meant to keep the child from eating all of their food. When Brown opened the cabinet, officers said multiple bugs came out where the food was stored.

According to the affidavit, Guy admitted to police that she beat the boy because he was "not cleaning as she requested."

Both Guy and Brown were arrested for felony child abuse and felony child neglect. They are each being held on $15,000 bond.