Father says his son died fighting for what we have

BRADENTON, Fla. - The body of a soldier from Manatee County is on the way home after a training exercise ended tragically in South Korea. The U.S. Army says 20-year-old Nicholas Panipinto was killed when his armored vehicle overturned last week at Camp Humphreys.

Panipinto's family wants him to be remembered as a man who had a huge heart, humble spirit, adored his family, and wanted more than anything to fight on the front lines for his country.

"He loved to hunt and fish," said his father Anthony Panipinto, looking through photos. "He loved, loved family, loved his mother."

After graduating from Manatee High School, Nicholas was at a crossroads. Wondering where his life should go, he looked to his family's legacy for answers.

"My father was a Marine, my grandfather was Army," Anthony Panipinto said.

Nicholas joined the Army in January 2018, hoping to later use the G.I. Bill to attend college.

"I still think it was the best thing for him," Anthony Panipinto said.

But the best isn't always easy.

"He went through basic. Hated it," his father laughed. 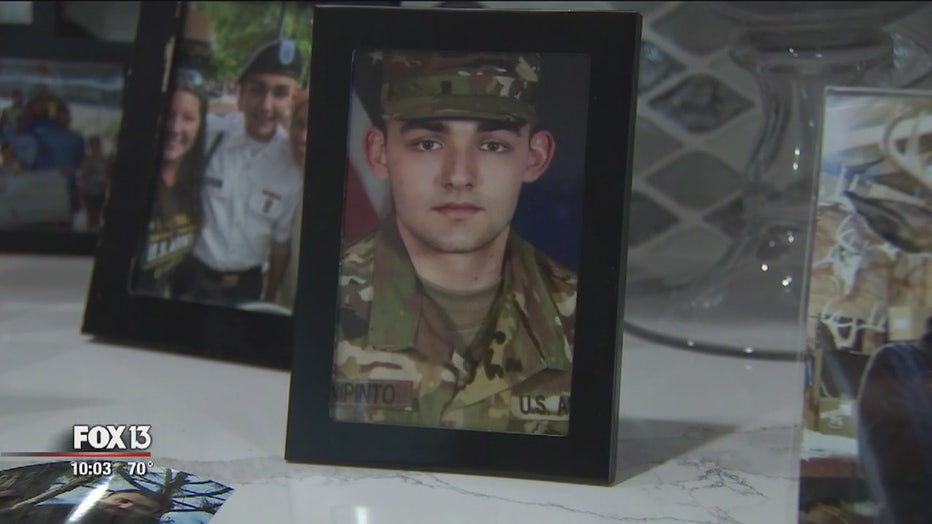 Nicholas fought through it. He completed basic training at Fort Benning. He was stationed in Fort Hood before being deployed to South Korea. He was promoted to a Bradley Fighting Vehicle driver.

During training November 6, his vehicle overturned.

"I couldn't understand how," Anthony Panipinto said. "He's on an Army base, safe, I thought. But they simulate, they train like you're in combat. I have a huge, huge hole in my heart...but it'll be OK. I know Nick's alright, so we'll be OK."

"My son died fighting for what we have...I'm extremely proud of him and he loved it."

Their neighborhood is now lined with flags, waving in Nicholas' honor. His father knows how the oldest of seven, with a quiet sense of humor, would feel about all this attention.

"He would hate this," Anthony said.

He hopes his son's life and sacrifice is a reminder of the price of freedom.

"Our tiny little problems are bought and paid for by our armed services," Anthony Panipinto said. "Our military is, they're everywhere all around the world so America's safe."

Nicholas Panipinto's body will arrive at Tampa International Airport Wednesday at 6:14 p.m., on Delta flight 1621. He'll be met by a procession of military and local law enforcement. He'll be buried November 20 at Sarasota National Cemetery.