Latonya Young, 44, spoke with FOX Television Stations about how was able to earn a college degree and write a book thanks in part to a donation from an Uber passenger.

ATLANTA - Latonya Young is now a college graduate and a published author thanks in part to a chance encounter and an inspiring conversation with her Uber passenger, Kevin Esch, in May 2018.

Young, a 44-year-old single mother, wanted to uber passengers from the Atlanta United FC game in downtown Atlanta when she picked up Esch, 46. Esch then opened up to Young about his recent divorce, and she provided comfort, drawing from her own experience.

"So I did share with him, you know, just, make sure next time you chose the right person meant for you," Young told FOX Television Stations Saturday.

Young then opened up about her life, saying she was a hairstylist looking to finish her associate’s degree in nursing but had trouble re-enrolling because she owed more than $600 to Georgia Perimeter College, now a part of Georgia State University.

Esch got Young’s number, tipped her $150 and a few days later, he told her he had paid her college balance. 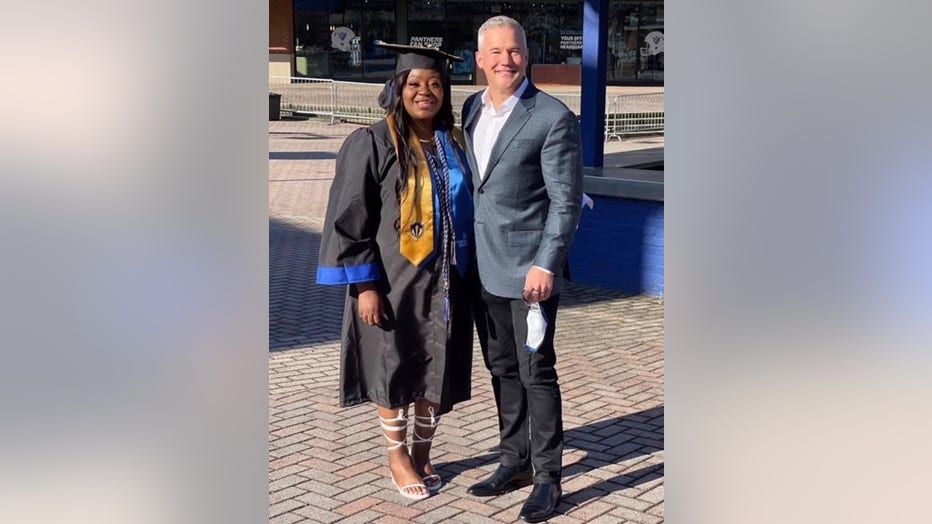 "It was on me because I had talked to her about going back and how important going back was," Esch told FOX Television Stations.

Young said she wanted to pay Esch back, but he declined, saying he wanted her to graduate.

"I wanted her to hold up her end of the deal," Esch continued. "It wasn’t about the money to me...what would change her more, as opposed to putting her in debt, would be to graduate."

And Young did, earning her associate’s degree in criminal justice in December 2019 and inviting Esch to graduation.

But that wasn’t enough. Young went back to school to get her bachelor’s degree, graduating from Georgia State in May 2021. Esch also attended the graduation.

Uber passenger pays for driver to go back to college

Kevin Esch spoke with FOX Television Stations about why he decided to help Latonya Young go back to college.

Their story has gone viral, and Young said she has received much support but also some criticism.

RELATED: 7-year-old girl shot in DC reunites with crew who helped save her life

Esch, who is White, said race didn’t play a factor at all in his decision.

"Honestly, I’m not trying to be a White savior," he continued. "I grew up in a tiny town where neighbors help neighbors. That’s what you do. That’s what we should do as humans."

Esch accepted an invitation to serve the board of directors for the Jeannette Rankin Foundation, an organization that raises money and provides scholarships to support low-income women.

Meanwhile, Young has written a book, "From Broken to Blessed" detailing her life’s journey including being a rape and domestic abuse survivor. The book is available for release in July. She said some of the proceeds from her book will go to help other women.

Young took out loans to earn her bachelor’s degree. Her friend has set up a GoFundMe page to help repay the loans and help Young care for her family. Young also received help from Ellen DeGeneres after appearing on her talk show in 2020.

Young said she’s not quite sure yet what to pursue as a career, but knows she wants to share her story to inspire others.

"I can only imagine who else [is] going through the same thing," she added.