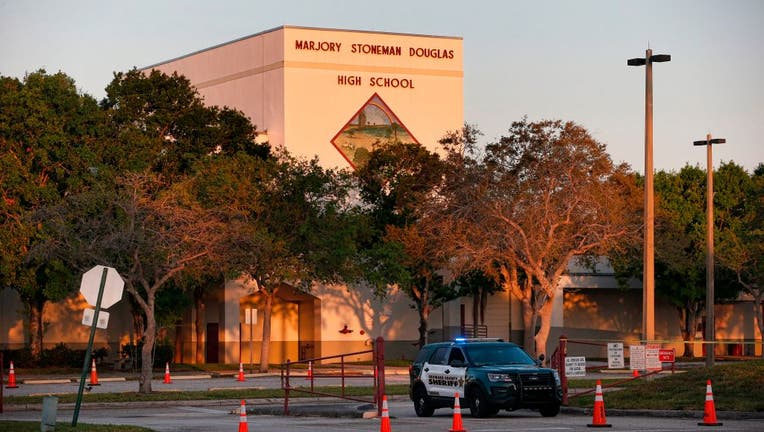 A general view of Marjory Stoneman Douglas High School as staff and teachers prepare for the return of students in Parkland, Florida on February 27, 2018. Florida's Marjory (Photo credit RHONA WISE/AFP via Getty Images)

FORT LAUDERDALE, Fla - A Florida school district abruptly dropped its request Thursday that the families of students and staff slain in a 2018 high school massacre be required to turn over their social media posts from that period as it tries to defend itself from lawsuits.

Attorney Eugene Pettis, who represents the Broward County Public Schools, lamented to Circuit Judge Patti Englander Henning that the media was portraying in an unfair light the request made of the families of Marjory Stoneman Douglas High School victims.

The Feb. 14, 2018, massacre left 14 students and three staff members dead. Numerous families are suing the district and others for negligence.

According to the South Florida SunSentinel, Pettis told the judge that the district wants to move the case forward and is concentrating on aspects where the district and the plaintiffs could agree.

The district had previously cited multiple lawsuits in which judges found social media postings were relevant for the defense, including lawsuits against local governments. The families have numerous claims against the district, including that it knew the shooting suspect, a former student at the school, was a threat and did little to protect the school from him.

Attorneys for the families previously said the request was intrusive and unnecessary. The posts would only show the families were grieving for their dead loved ones.

READ: Widow of Parkland massacre victim elected to school board

Former student Nikolas Cruz, 22, is charged with 17 counts of first-degree murder in the shooting and faces a possible death sentence if convicted. His trial has been postponed because of the pandemic. Cruz had a long history of emotional and behavioral problems and his social media posts have been presented as evidence. They include threats and Instagram posts of him with guns.

In addition to the school district, Cruz, the Broward County Sheriff’s Office and its former deputy, Scot Peterson, who was stationed at the school, and others are facing multiple lawsuits.