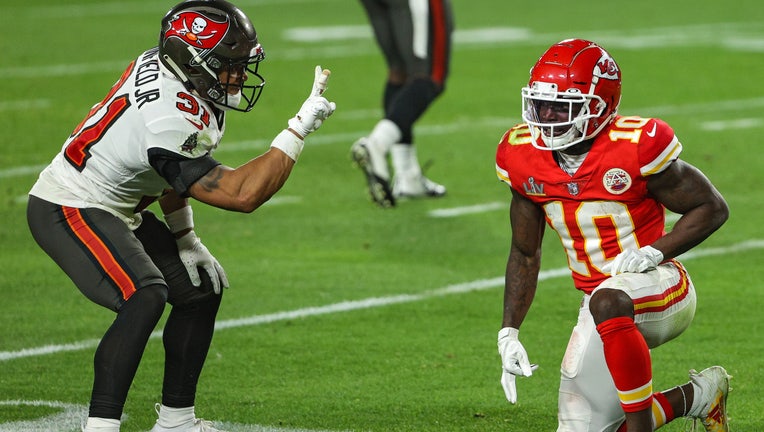 Antoine Winfield Jr. #31 of the Tampa Bay Buccaneers gestures towards Tyreek Hill #10 of the Kansas City Chiefs after breaking up a pass during the fourth quarter of the game in Super Bowl LV at Raymond James Stadium on February 07, 2021 in Tampa, Fl

Winfield was fined for taunting Kansas City Chiefs wide receiver Tyreek Hill after a turnover late in Super Bowl LV earlier this month. He threw up the peace sign to Hill and explained later that it was because the wide receiver had done it to him during their Week 12 matchup during the 2020 regular season.

Winfield told reporters that he wanted to "spin" the fine into a positive.

"Since it got a lot of media attention, it was out there and I wanted to just spin it in a way to make it positive. And what better way than to give back to the Youth Leadership program that I did all year? That was kind of how that kind of came about because I was thinking of different things I could do. I spent the whole year with the kids and talking to them and everything, so I feel like that was a good opportunity to go with those guys," he said, via the team’s website.

The rookie defensive back spent time with the Buccaneers Youth Leadership Program to lend a helping hand to students in the Tampa, Fla., area. The program involves 25 members of the Bucs’ organization serving as mentors to 25 students at Young Middle School in East Tampa.

The Tampa Buccaneers Social Justice Fund also matched the donation. There will be $15,630 going to the school.