TAMPA, Fla. - The Tampa Bay Buccaneers and their fans will be celebrating their historic Super Bowl win the best way the Bay Area knows how -- on the water.

A socially-distant boat parade will take place Wednesday, February 10 -- much like how the Tampa Bay Lightning celebrated their championship win last year -- but this time, instead of the risk of the Stanley Cup falling into the Hillsborough River, the team will have the Lombardi Trophy in their possession.

A deteriorating weather forecast prompted the city to move the plans up from Friday.

The boat parade will take place along the Riverwalk on February 10 starting at 1 p.m.

The city says viewing areas that offer ample space for social distancing are being arranged and masks are required outdoors in all event zones and entertainment districts, including downtown and along the Tampa Riverwalk, per executive order 2021-07.

The boat parade will also be live-streamed and shared on the Tampa Bay Buccaneers, the city of Tampa, and FOX 13 News.

The following bridges will be temporarily closed to pedestrian and vehicle traffic as the parade approaches and will immediately re-open after the Lombardi Trophy passes by: 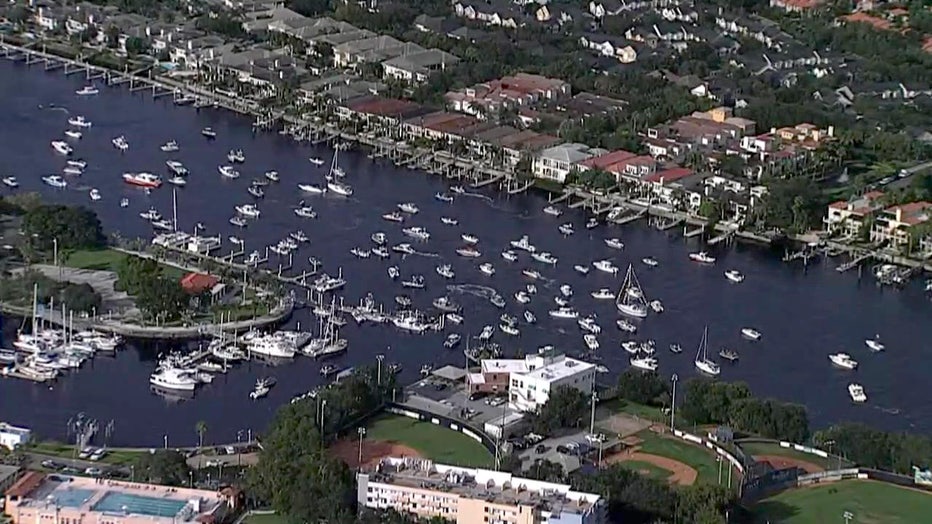 Boaters can be in the water during the parade, however they cannot participate in the parade. Local, state and federal law enforcement partners will line the route to ensure safety and compliance.

The following parking options are recommended for fans attending the event:

A designated ADA accessible area will be available on the Tampa Riverwalk behind the Tampa Convention Center for viewing of the parade.

Four months ago, when the Lightning clinched their Stanley Cup win, the team sailed the Hillsborough River as fans watched and cheered from both sides of the river. That was followed by a limited-attendance rally inside Raymond James Stadium.

That event was also held on a Wednesday.

From 2019: Stamkos and Hedman hoist the Stanley Cup

Last week, Disney World announced there would be no Super Bowl parade this year due to the pandemic. Instead, Tom Brady and Rob Gronkowski were invited to head over to the theme park to celebrate.

Gronk visited on Monday, one day after the big win, and rode Thunder Mountain at Magic Kingdom and Rise of the Resistance at Hollywood Studios. He also met Mickey and Minnie Mouse.

Brady is expected to head to Disney World in the coming months, theme park officials said.

President Joe Biden will invite the Tampa Bay Buccaneers to Washington, D.C. to celebrate their Super Bowl win once it is "COVID-safe," the White House says.

The Bucs' worst-to-first story has become part of the fabric of the Tampa Bay Area. In fact, the effort to get the NFL to award the franchise helped lead to the name "Tampa Bay."

Buccaneers hope to keep core together to chase another Super Bowl

The Tampa Bay Buccaneers are already thinking about what it’ll take to repeat as Super Bowl champions.

Super Bowl LV in Tampa got off to a roaring start thanks to a rare trifecta flyover by the U.S. Air Force. A B-52, a B1-B, and the B-2 ‘stealth’ bomber cruised over Raymond James Stadium to help kick off the big game.

Being backup dancers for The Weeknd was an unforgettable opportunity for four best friends.