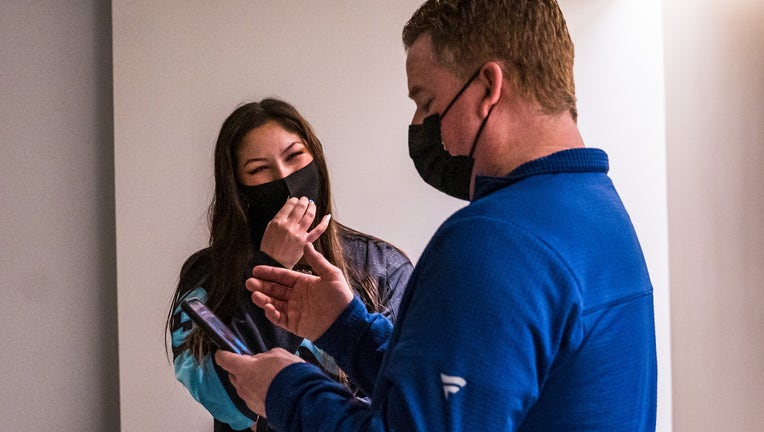 SEATTLE - A manager for the Vancouver Canucks says his life was saved by a Seattle Kraken fan during their first game in Seattle.

Canucks’ assistant equipment manager Brian "Red" Hamilton says a woman sat behind the Canucks bench during their game against the Kraken on October 23. The woman, Nadia Popovici, is heading into medical school and happened to notice a mole on Hamilton's neck. She typed out a quick message on her phone: "THE MOLE ON THE BACK OF YOUR NECK IS POSSIBLY CANCEROUS – PLEASE GO SEE A DOCTOR!"

The game had gotten tense, and Popovici said things were getting chirpy between players and fans—she was lucky enough to get Hamilton's attention by banging on the glass. He read her message, gave her a nod and continued to work.

But, when Hamilton got back home to Canada, that message still bothered him. He consulted his girlfriend and team doctors, and eventually relented and got it removed.

"[Nadia] didn’t take me out of a burning car, but she took me out of a slow fire," Hamilton told reporters in a Saturday morning news conference. "The words out of my doctor’s mouth was if I ignored that 4-5 years, I wouldn’t be here."

Saturday morning, the Canucks shared a letter from Hamilton hoping to track down the woman who saved his life—that post went viral, with hockey Twitter scouring through photos to try and identify Popovici, or rope in the Seattle Kraken to help. While the cyber-sleuths were sharing away, Popovici was fast asleep, having just worked a long shift for a crisis hotline on New Year's Eve.

Once she was found, the Canucks organized a heartwarming meetup between Popovici and Hamilton.

The full letter from Red read as follows:

"My name is Brian "Red" Hamilton and I am the assistant equipment manager for the Vancouver Canucks. I am trying to find a very special person and I need the hockey community's help. To this woman I am trying to find, you changed my life, and now I want to find you to say THANK YOU SO VERY MUCH!

"Problem is, I don't know who you are or where you are from. I do know that you were sitting behind the Canucks bench the night the Seattle Kraken played their first ever home game. That evening, Oct 23rd, and the message you showed me on your cell phone will forever be etched into my brain and has made a true life-changing difference for me and my family. Your instincts were right and that mole on the back of my neck was a malignant melanoma and thanks to your persistence and the quick work of our doctors, it is now gone.

"I want you all to know that this isn't about me. It's about an incredible person taking the time to notice something concerning and then finding a way to point it out during the chaos of a hockey game. Going to great lengths to get my attention from the stands while I did my job on the Canucks bench. We are looking for this incredible person and we need you to share this with your friends and families to help us find a real life hero, so I can express my sincerest gratitude."

Get breaking news alerts in the FREE FOX 13 Seattle app. Download for Apple iOS or Android.