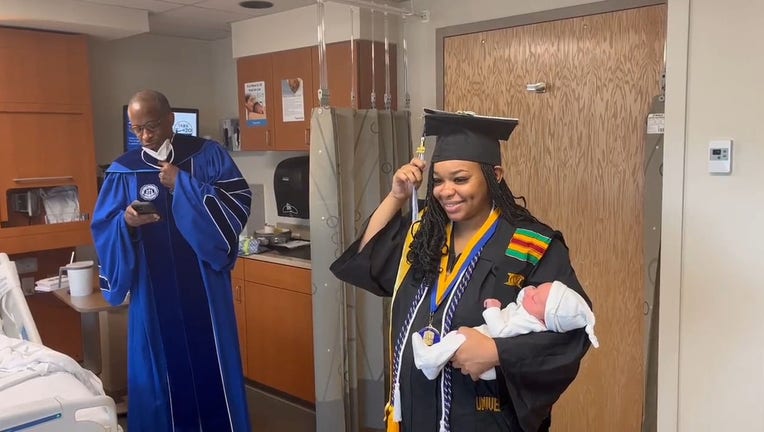 Jada Sayles is pictured receiving her diploma at a hospital on May 15, 2022, in New Orleans, Louisiana. (Credit: Dillard University/Adria Kimbrough, Esq. via Storyful)

NEW ORLEANS - When a college student went into labor just hours before her graduation ceremony, the university stepped up in a big way — bringing a private ceremony to the new mother’s hospital room.

Jada Sayles went into labor and was eventually admitted to the hospital around 4:30 a.m. local time on May 14, which was the same day as her graduation from Dillard University, a private, historically Black university in New Orleans.

Dilliard University’s outgoing president, Dr. Walter M Kimbrough, shared a post about the touching weekend, saying he was in contact with Sayles and decided to bring the graduation ceremony to her the next day.

"Texted me around 4:30 am Saturday saying she was being admitted, & the baby was born on her graduation day, May 14th. So we rolled up to the hospital so I could finish my tenure in the most special way," Kimbrough wrote on Twitter.

Kimbrough also shared footage of the private ceremony, which was captured by his wife, Adria Kimbrough, Esq. Sayles’ family was also in attendance, FOX 8 in New Orleans reported.

Dressed in her cap and gown while holding her new baby in her arms, Sayles received a Bachelor’s degree in Criminal Justice and Corrections, according to her LinkedIn profile.

"I even did the tassel part of commencement! This really was a very sweet moment. I’ll never forget it," Kimbrough said in a second post.

Latonya Young, 44, spoke with FOX Television Stations about how was able to earn a college degree and write a book thanks in part to a donation from an Uber passenger.

On her part, the new mother also detailed the memorable weekend, writing: "I thought I was gonna walk across the stage to get my degree, instead I got my baby. My sweet face decided to make his way on MY big day (now his)."

"Shoutout to my university for still bringing my graduation and degree to me," Sayles continued. "Ima college graduate & mommy, talk to me nice!"