TAMPA, Fla. - A Pasco County man is accused of conspiring with a buddy of his to kill the woman he pleaded guilty to stalking and secretly recording during a sexual encounter.

Colin Speer pleaded guilty to secretly recording video of himself and a woman having sex, which he then used to try and extort her. Prosecutors say he also threatened to show up at his victim’s job and “rape and kill her.”

Speer pleaded guilty to video voyeurism and aggravated stalking in the case, but now prosecutors say Speer enlisted Matthew Anderson to help him end his victim’s life and possibly make it look like a suicide.

The courts released text messages between Speer and Anderson, where they apparently lay out parts of their plan. 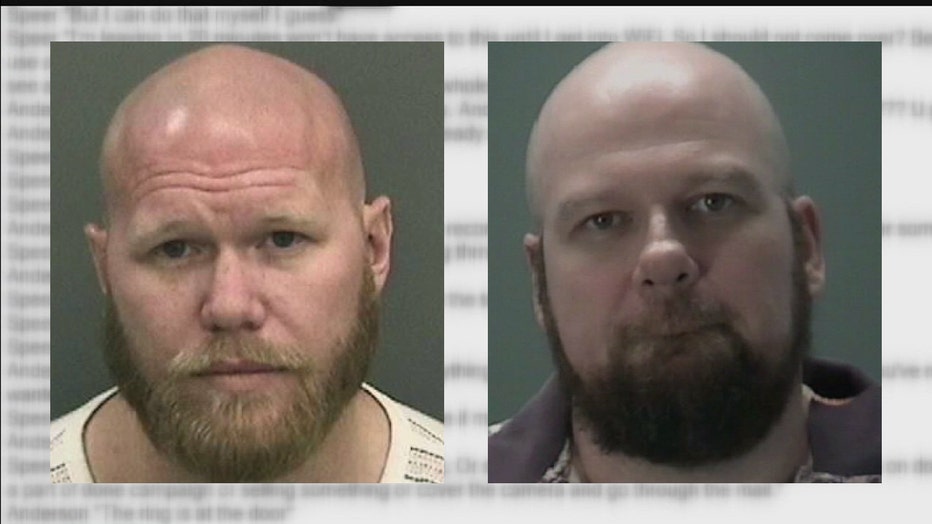 In court documents, an investigator writes, regarding text messages sent between Speer and Anderson, “the following does not contain all the messages. It is not intended to be a verbatim recitation of the entire conversation, but to show context of the conversation involving criminal conspiracy.”

According to the documents, Speer sent Anderson a picture of the victim, referring to her as a “filth pig.”

Anderson also sent Speer a picture of the victim's residence and an address, noting the victim’s residence had a Ring doorbell camera.

Speer: Needless to say someone' s going to pay for my loss of time and missing my grandmother and uncles death and time with my family and dog

Speer: … I could use a second pair of eyes and hands. If I see an opportunity I' m going to take it and end this whole thing.

Anderson: Brother I thought she'd be at work all day. And [expletive] are you talking about take an opportunity??? U gonna kill her?

Anderson: No. I' m gonna have to kill her and I'm already out on two different bonds

Anderson: Creepy. Ok she just walked in. Do some recon and get back with me. We can kill her together some other time

In the text messages, Speer and Anderson appear to discuss the victim’s residence and refer to possible witnesses at one of the locations.

Speer: Want to go to the mailbox and check and see if mail is in he name

Anderson: No. They have a ring [doorbell camera]

Speer: I know. But could wear a mask or something. Or someone who is not me could go up and knock on door and say their a part of done campaign or selling something or cover the camera and go through the mail.

Speer: Or at night just break down the door and then do it. Night time would be best time for next step

Speer: So I confirmed through Florida voter registration that that address is where is registered to vote and not the other addresses listed as Hers

At times, Anderson appeared to try and pull Speer back from his plan.

Anderson: I don't know what you wanna do bro. She got you. You played out. That [expletive] over. If you want to serve her some revenge it needs to be [expletive] ice cold

Speer: I know exactly what I want to do. I know what I need to do. And it will end up with me getting me sentence vacated.

Speer: It' s a matter of when to get it done. And sooner than later I' d better

Anderson: I think that doing something to her soon would be a mistake

Speer: Not if I do it right. S as he' s guilt ridden you see. It' s weighed on her conscience and she had to admit to her friends and family and go be with her dad in heaven.

Anderson: That is kind of stretching it bro. You' d have to have some serious skill to set something like that up and I don't have it

Speer: If someone thinks it suspicious I will have an alibi with friends. It' s so sad, but I knew she would finally tell the truth, but never expected her to off herself. So sad isn' t it?

Despite Anderson’s apparent hesitation, Speer continued to talk through his plans.

Anderson: Honestly bro the best way to clear your name if you guys were really ever close is to play nice and get her to go down with you and give a statement

Speer: Just timing really but honestly I am thinking of getting a lock pick gun. That might keep from busting the door down.

Anderson: And then you kill her

Speer: She had to go. And if she texts all her friends and fam and writes on her social media admissions publicly. That helps me

Speer: Her suicide statement is the only statement I need

“He's been COVID positive, so he's had a pretty rough time out there,” said Athan.

Speer remains in a Pasco County jail and will eventually be transferred to Tampa to face charges of conspiracy and solicitation to commit first-degree murder.

Matthew Anderson faces a charge of conspiracy to commit murder.