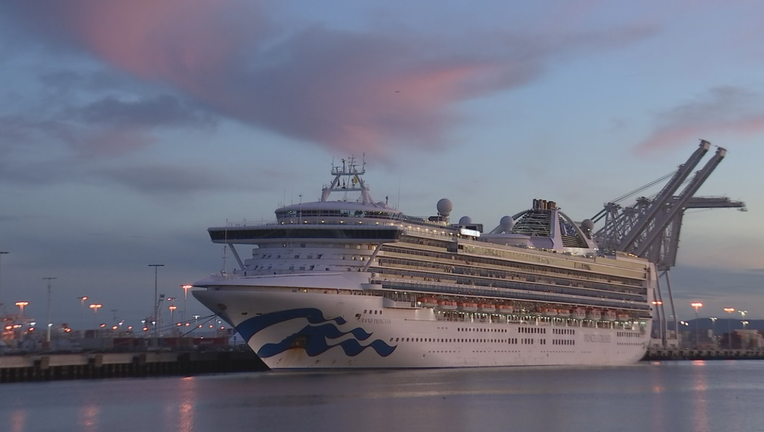 The Princess cruise is docked in Oakland, California. March 10, 2020

A new study done by the Centers for Disease Control and Prevention (CDC) notes that the genetic material of the coronavirus was present for up to 17 days on the Diamond Princess cruise ship.

The CDC research, published on March 23, notes that the virus was identified on a number of surfaces in symptomatic and asymptomatic persons, long after they had been emptied.

"A high proportion of asymptomatic infections could partially explain the high attack rate among cruise ship passengers and crew," the researchers wrote. "SARS-CoV-2 RNA was identified on a variety of surfaces in cabins of both symptomatic and asymptomatic infected passengers up to 17 days after cabins were vacated on the Diamond Princess but before disinfection procedures had been conducted."

A Princess Cruises spokesperson told Fox News late Tuesday that what was detected on the surfaces of the rooms was SARS-CoV-2 RNA* and "not [the] live virus."

The discovery of the viruses ribonucleic acid can indicate the virus "was present" but does not indicate it is still alive.

"These findings were expected because Princess Cruises voluntarily preserved these staterooms for this testing," the spokesperson stated, adding that the findings "do not indicate that transmission of the virus that causes COVID-19, was transmitted via these surfaces."

By March 17, there were confirmed COVID-19 cases "associated with at least 25 additional cruise ship voyages," the researchers stated.

The experts added that the data cannot "be used to determine whether transmission occurred from contaminated surfaces," but "further study of fomite transmission of SARS-CoV-2 aboard cruise ships is warranted."

The implications of the study are far-reaching, the experts explained, noting that "outbreaks of COVID-19 on cruise ships pose a risk for rapid spread of disease beyond the voyage," adding that "[a]ggressive efforts are required to contain spread."

Earlier this month, researchers found that the novel coronavirus COVID-19 can remain in the air for up to three hours, and live on surfaces such as plastic and stainless steel for up to three days.

The study, which has not been peer-reviewed yet, also notes that the virus can remain on copper surfaces for four hours and cardboard for up to 24 hours.

A separate study published in February concluded that if COVID-19 is similar to other coronaviruses, such as SARS or MERS, it could live on surfaces like metal, glass and plastic for up to nine days, Fox News previously reported.

By comparison, the flu virus can only live on surfaces for approximately 48 hours.