HAINES CITY, Fla. - Polk County detectives publicly identified the suspect who fled from deputies, sped away and crashed into three vehicles, killing three others and himself.

Sheriff Grady Judd said the suspect, who also died in the crash, was 35-year-old Riquelme Villar-Villalona, describing his actions as "crazy," "wild," and "out of control."

"Had Villalona survived that crash," the sheriff said, "he would've been charged with three counts of vehicular homicide."

The chain of events started around Monday with a 911 call about a possible abduction in Poinciana, Judd explained.

"If you do not stop them I believe he's gonna kill her. I am dead serious. Please have someone stop that vehicle, she was bleeding," the caller said, according to the sheriff's office. The report also described the suspect vehicle as a black Mazda.

It turned out, the woman was his girlfriend and detectives later located her at the hospital. But, immediately after the 911 call, deputies were not sure if she was in the vehicle with him, Judd said. 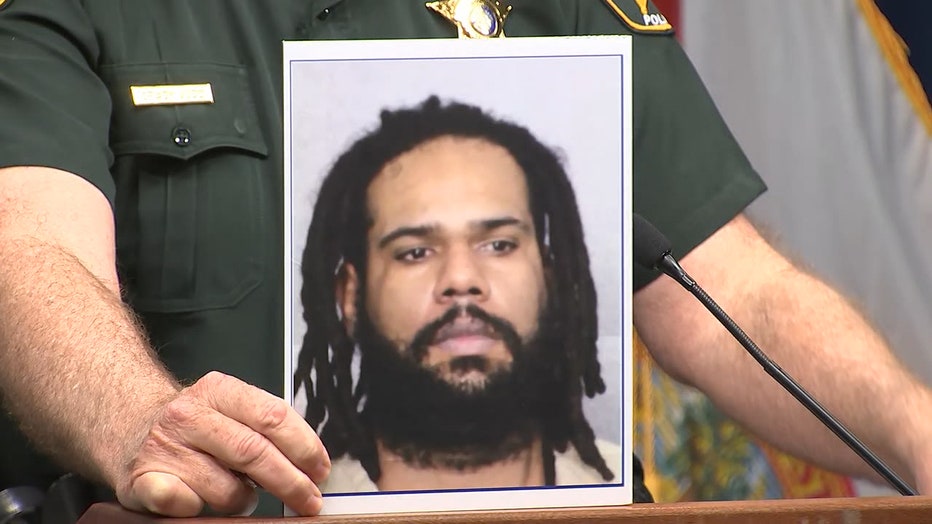 The suspect vehicle was spotted on Marigold Avenue, heading south out of Poinciana. A deputy got behind and turned on the lights of his patrol car.

"The driver immediately moves into northbound traffic and is going head-on into traffic, so the deputy wisely turns off his lights and disengages the pursuit," the sheriff described. He said the deputy continued to follow from a distance. The agency showed surveillance video of Villar-Villalona speeding past other vehicles with the deputy "four-tenths of a mile behind."

Villar-Villalona was speeding west on Lake Hatchineha Road near Watkins Road, when he crashed into a black 2016 Ford F-150 that was also heading west. The impact caused the pickup truck to enter the eastbound lane. Investigators said it appeared the F-150 collided with a silver 2021 Toyota Tacoma which was heading east.

After colliding with the Ford, Villar-Villalona's Mazda went airborne and hit a gray 2020 Ford Escape, which was traveling east, officials say.

The Mazda's roof was torn from the car, and the suspect was ejected. Villar-Villalona was "instantly killed," according to the sheriff's office.

Judd described the scene as "total carnage – one of the worst we've seen in this county."

Two people inside the Ford Escape – a 38-year-old male driver and a 73-year-old female passenger – died at the scene. The driver of the Toyota Tacoma, a 48-year-old man, was taken to a hospital where he later passed away.

The 19-year-old female passenger inside the Toyota Tacoma was treated and medically cleared.

Sheriff Judd said when detectives located the girlfriend involved in the initial call, she was found at the hospital. He said she has been uncooperative.

"This 911 call was generated to help her to keep her safe from this very violent guy who ultimately killed three people and himself," Judd said, "because he wanted to beat and injure his girlfriend."

The sheriff said the other drivers and passengers involved in the crash will not be publicly identified by the agency.