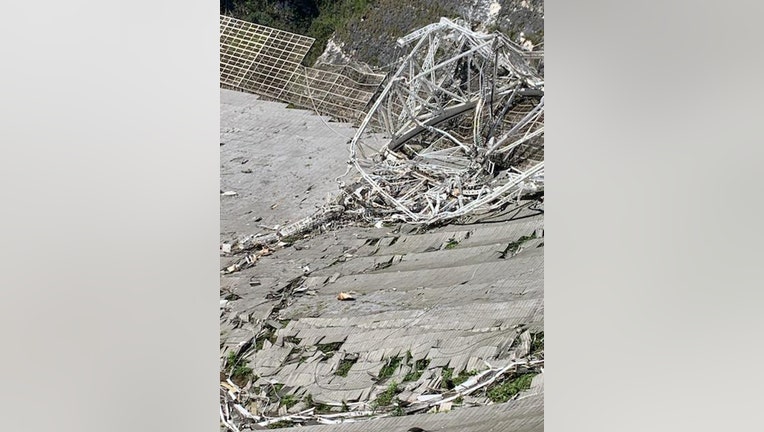 ARECIBO, Puerto Rico (AP) - A huge, already damaged radio telescope in Puerto Rico that has played a key role in astronomical discoveries for more than half a century completely collapsed on Tuesday.

The telescope's 900-ton receiver platform and the Gregorian dome — a structure as tall as a four-story building that houses secondary reflectors — fell onto the northern portion of the vast reflector dish more than 400 feet below.

The U.S. National Science Foundation had earlier announced that it would close the radio telescope. An auxiliary cable snapped in August, causing a 100-foot gash on the 1,000-foot-wide (305-meter-wide) dish and damaged the receiver platform that hung above it. Then a main cable broke in early November.

The collapse stunned many scientists who had relied on what was until recently the largest radio telescope in the world.

"It sounded like a rumble. I knew exactly what it was," said Jonathan Friedman, who worked for 26 years as a senior research associate at the observatory and still lives near it. "I was screaming. Personally, I was out of control.... I don't have words to express it. It's a very deep, terrible feeling."

Friedman ran up a small hill near his home and confirmed his suspicions: A cloud of dust hung in the air where the structure once stood, demolishing hopes held by some scientists that the telescope could somehow be repaired.

The collapse at 7:56 a.m. on Tuesday wasn't a surprise because many of the wires in the thick cables holding the structure snapped over the weekend, Ángel Vázquez, the telescope's director of operations, told The Associated Press. 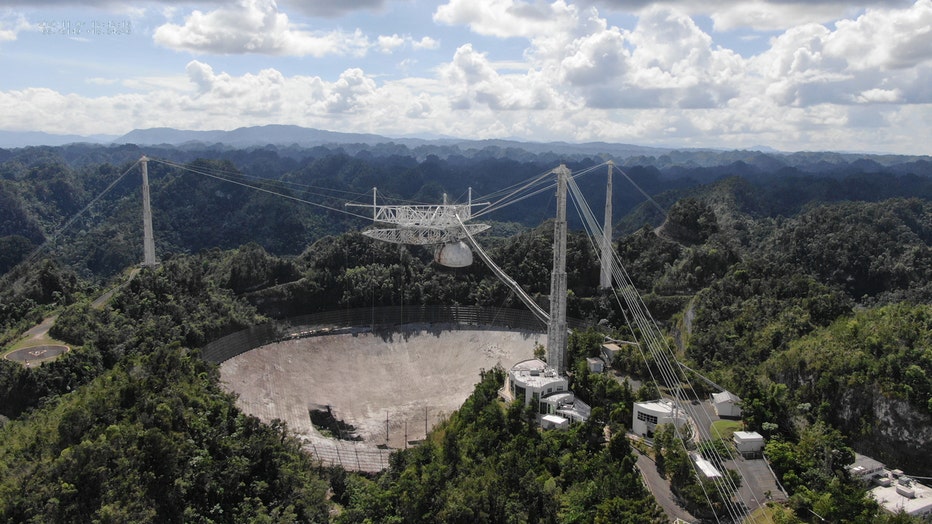 A 100-foot gash seen in the dish at the Arecibo Observatory in Arecibo, Puerto Rico, Nov. 7, 2020. (University of Central Florida photo via National Science Foundation)

He said that it was extremely difficult to say whether anything could have been done to prevent the damage that occurred after the first cable snapped in August.

"The maintenance was kept up as best as we could," he said. "(The National Science Foundation) did the best that they could with what they have."

However, observatory director Francisco Córdova, said that while the NSF decided it was too risky to repair the damaged cables before Tuesday's collapse, he believes there had been options, such as relieving tension in certain cables or using helicopters to help redistribute weight.

Meanwhile, installing a new telescope would cost up to $350 million, money the NSF doesn't have, Vázquez said, adding it would have to come from U.S. Congress.

"It's a huge loss," said Carmen Pantoja, an astronomer and professor at the University of Puerto Rico who used the telescope for her doctorate. "It was a chapter of my life." 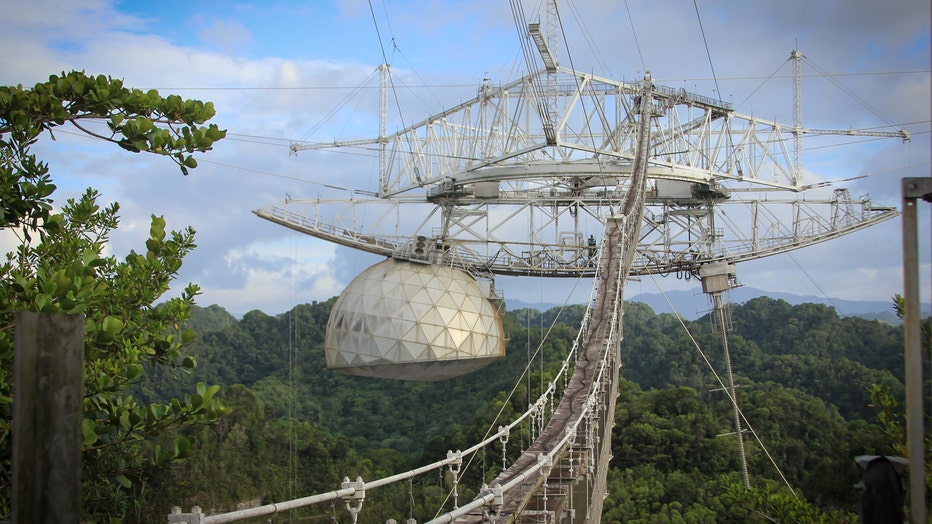 Scientists worldwide had been petitioning U.S. officials and others to reverse the NSF's decision to close the observatory. The NSF said at the time that it intended to eventually reopen the visitor center and restore operations at the observatory's remaining assets, including its two LIDAR facilities used for upper atmospheric and ionospheric research, including analyzing cloud cover and precipitation data. The LIDAR facilities are still operational, along with a 12-meter telescope and a photometer used to study photons in the atmosphere, Vázquez said.

"We are saddened by this situation but thankful that no one was hurt," NSF Director Sethuraman Panchanathan said in a statement. "When engineers advised NSF that the structure was unstable and presented a danger to work teams and Arecibo staff, we took their warnings seriously."

The telescope was built in the 1960s with money from the Defense Department amid a push to develop anti-ballistic missile defenses. It had endured hurricanes, tropical humidity and a recent string of earthquakes in its 57 years of operation.

The telescope has been used to track asteroids on a path to Earth, conduct research that led to a Nobel Prize and determine if a planet is potentially habitable. It also served as a training ground for graduate students and drew about 90,000 visitors a year.

"I am one of those students who visited it when young and got inspired," said Abel Méndez, a physics and astrobiology professor at the University of Puerto Rico at Arecibo who has used the telescope for research. "The world without the observatory loses, but Puerto Rico loses even more."

He last used the telescope on Aug. 6, just days before a socket holding the auxiliary cable that snapped failed in what experts believe could be a manufacturing error. The National Science Foundation, which owns the observatory that is managed by the University of Central Florida, said crews who evaluated the structure after the first incident determined that the remaining cables could handle the additional weight.

But on Nov. 6, another cable broke.

Scientists had used the telescope to study pulsars to detect gravitational waves as well as search for neutral hydrogen, which can reveal how certain cosmic structures are formed. About 250 scientists worldwide had been using the observatory when it closed in August, including Méndez, who was studying stars to detect habitable planets.

"I'm trying to recover," he said. "I am still very much affected."