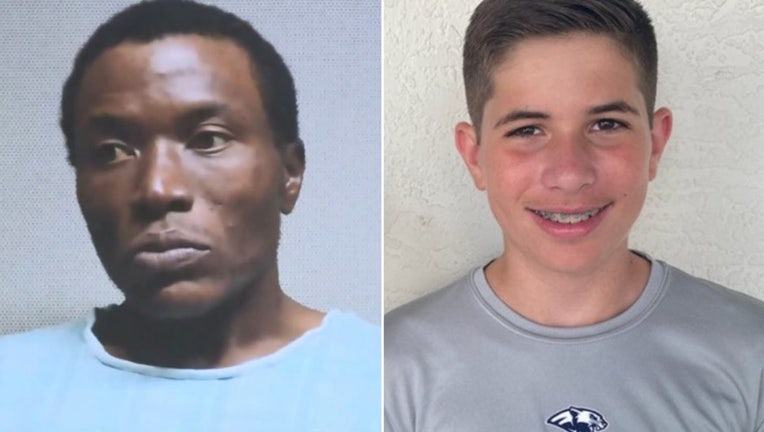 PALM BEACH GARDENS, Fla. - A homeless man with a history of random violence fatally stabbed a 14-year-old boy riding his bike during a chance encounter and without apparent motive, a Florida police chief said Thursday.

Semmie Lee Williams, 39, was arrested Wednesday in Miami on first-degree murder charges for the Nov. 15 slaying of Ryan Rogers, whose body was found alongside an Interstate 95 overpass the next day, said Palm Beach Gardens Chief Clinton Shannon. The high school freshman and avid soccer player had gone out for an early evening bike ride and never returned home.

Court records show Rogers was stabbed numerous times in the head. The records say Williams' DNA was found on a pair of headphones at the scene and that Rogers' blood was found on a bandana Williams had in his backpack when he was located. Investigators say Williams also matches the description of a man videotaped by a security camera walking toward the area where the body was found about 10 minutes before the boy's cellphone stopped moving.

Williams denied ever encountering Rogers, the records show. Williams made his first court appearance Thursday and was ordered held without bond.

Shannon called Williams a "dangerous monster," saying he has no known ties to Palm Beach County and it is unknown why he would have been in the area, which is about 80 miles north of Miami. No one else is believed to be involved in the slaying.

"This appears to be a completely random act. We do not have a motive," Shannon said. "I would best describe it as an innocent child victim having a chance encounter with a very violent criminal."

Williams pleaded guilty three years ago in Atlanta to aggravated assault-strangulation and battery on a person 65 or older for a random 2014 attack, court records show. Court procedures were delayed for four years because Williams was found mentally incompetent to assist in his defense.

A man was walking down the street when Williams jumped out from behind a wall, ran up behind him, put him in a tight chokehold and beat him on the head, transcripts of Williams' 2018 court hearing show.

The victim testified that he could not breathe during the attack and was about to pass out when passersby intervened. Williams threw the victim into a ravine, leaving him with a permanent arm injury, and ran away. Williams was arrested after a short search of the area.

The victim said that he asked Williams during the attack if he wanted money.

"He said no. He knows my kind and he is going to finish me," the victim told Judge Thomas A. Cox Jr. "I'm lucky to be alive. The intent was to kill me."

Williams had served four years in jail and a mental hospital. Prosecutors wanted an additional year, but Cox said that since Williams had no prior felony convictions, he would be sentenced to time served and released that day. Cox ordered Williams to leave Georgia immediately upon release and travel by bus to central Florida to live with his mother, who had agreed to care for him. He was to serve five years probation in Florida.

The Atlanta victim did not immediately return a call seeking comment. The Associated Press is not naming him to protect his privacy.

Williams also has arrests in the mid-2000s in central Florida for various misdemeanor charges including domestic violence, resisting arrest without violence, petty theft and carrying a concealed electronic weapon. His mother, during that period, took out a restraining order against him.

His mother did not return a call seeking comment.