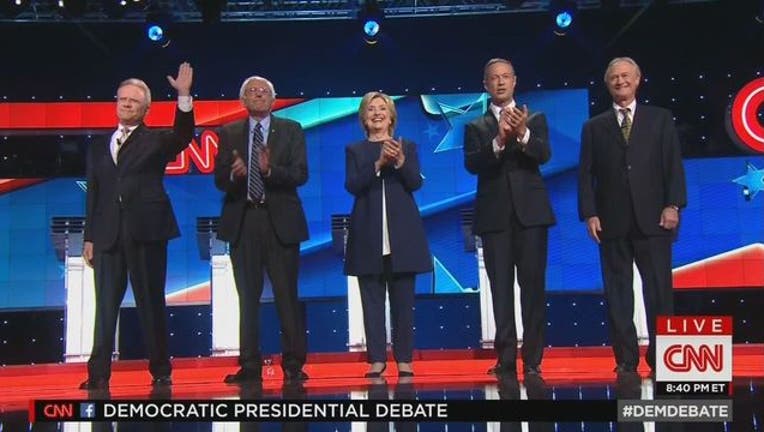 Here are five takeaways from the debate in Nevada.

Buffeted by an email controversy and sagging poll numbers, Clinton was on defense for much of the summer. But from the first moments of the debate, Clinton went on offense against Sanders, who has emerged as her chief rival for the Democratic nomination.

When Sanders said the U.S. should look to countries like Denmark, Sweden and Norway on the economy, Clinton replied that while the U.S. sometimes needs to "save capitalism from itself," America was much different.

"We are not Denmark. I love Denmark, but we are the United States of America," Clinton said.

Clinton later said the Vermont senator wasn't tough enough "at all" on gun violence in the Senate and noted he had opposed the 1993 Brady bill and supported 2005 legislation to give gun manufacturers immunity from lawsuits. Sanders said it was a "large and complicated bill," but Clinton wasn't buying it.

"It wasn't that complicated to me. It was pretty straightforward to me," Clinton said.

ON THE QUESTION OF EMAILS

Clinton had to know she would be pressed during the debate about her use of a private email account and server during her tenure as secretary of state. And she said, again, she had made a mistake in doing so.

But she had to be pleased that the moment moved on to laughs — and a handshake with Sanders.

In perhaps the most memorable exchange of the debate, Sanders dismissed the issue as one not worth voters' time with a cranky one-liner.

"Let me say something that may not be great politics," Sanders said, "but I think the secretary is right, and that is that the American people are sick and tired of hearing about your damn emails!"

Clinton and the audience cheered, and she and Sanders smiled and shook hands. "Thank you, Bernie," she said.

CNN moderator Anderson Cooper tried to refocus the candidates on the matter, but that only gave Clinton the chance to slam the GOP-led congressional committee investigating the matter as "basically an arm of the Republican National Committee."

"It is a partisan vehicle, as admitted by the House Republican Majority Leader, Mr. (Kevin) McCarthy, to drive down my poll numbers," she said. "Big surprise. And that's what they have attempted to do."

Clinton had some weak moments, too. She was taken to task for her shifting views on the Trans-Pacific Partnership trade deal and her recently announced opposition to the Keystone XL oil pipeline. Liberals in the Democratic party are strongly opposed to both.

Clinton defended herself, asserting that everyone on stage had "changed a position or two" during their political careers.

She said when she served as President Barack Obama's secretary of state, she had hoped the Pacific Rim trade agreement would be "the gold standard," but in the end she said "it didn't meet my standard."

And even though she had said in 2010 she was "inclined" to support the Keystone pipeline, Clinton implied she had stayed neutral on the Canada-to-U.S. pipeline throughout her tenure.

THE OTHERS SHOW THEY'RE LIKELY ALSO-RANS

The three other Democratic candidates have struggled to gain traction against Clinton and Sanders, and it didn't look like they established any footing in the debate.

Former Maryland Gov. Martin O'Malley did the best of the three, stressing his record of promoting liberal causes during his two terms, but he was also forced to defend his record on criminal justice as Baltimore's mayor.

He also tried to tap into the notion that another Clinton in the White House is one too many. He said the nation "cannot be this dissatisfied" with the nation's politics and economy "and think that a resort to old names is going to move us forward."

Shot back Clinton: "I would not ask anyone to vote for me based on my last name. I'd ask them to listen to what I'm proposing, look at what I accomplished in the Senate, as secretary of state, and then draw your own conclusion."

Former Rhode Island Gov. Lincoln Chafee's best moment may have come at the outset, when the former senator explained his decision to switch from Republican to independent to Democratic during his career by saying he was a "block of granite" on the issues.

Former Virginia Sen. Jim Webb appeared openly frustrated at not having equal time and at times talked over Cooper, the moderator.

Neither had a true breakout moment, raising questions about whether they might make a return appearance on stage during the next debate in Iowa.

If Vice President Joe Biden was looking for an opening to join the Democratic field, the debate didn't appear to give him one.

Clinton made no obvious stumbles in the debate and Sanders played the role of her more liberal counterpart. O'Malley presented himself as a can-do former governor and mayor who has championed an array of progressive causes.

Biden's name didn't come up during the debate, and the exchanges during the forum didn't leave an impression of a party in need of a white knight to ride to its rescue.

After months of considering whether to make a late entry into the race, the debate may have shown that Biden's window of opportunity has passed.