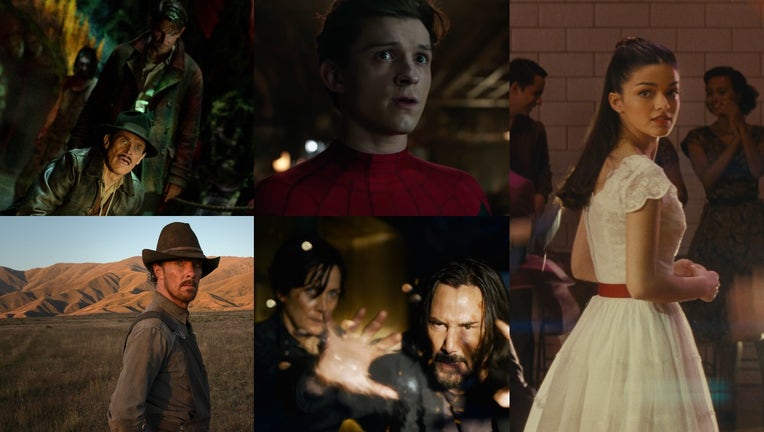 CHICAGO - It’s the most movie-filled time of the year. (Go ahead and sing that, if you want!)

Movie theaters may not have returned to a bustling, pre-pandemic-esque state of affairs, but for those willing to grab their mittens and head for the big screen, a treasure trove of hotly anticipated flicks await.

Steven Spielberg takes a fresh look at a classic musical, Keanu Reeves re-enters "The Matrix," Nicole Kidman plays a comedy giant, Bradley Cooper joins a carnival and Tom Holland’s Spidey swings into the Marvel multiverse, to name just a few of the films with bold-faced names arriving in theaters this month.

But for those who’d prefer to snuggle up at home, there’s still plenty worth seeing. Some of the year’s most exciting movies (the aforementioned continuation of the "Matrix" franchise) will be available to stream even as they hit the multiplex, while still more will arrive on Netflix, Prime Video, and other streamers a week or two later. Others, such as WWE’s first foray into the world of animation (and monster wrestling), are only available for at-home (or at-phone) viewing.

Consider this preview our little holiday gift to you. Here’s what’s headed your way, cinematically speaking, in Dec. 2021.

December 1: Feel "The Power of the Dog"

Forgive the pun, but "The Power of the Dog" is a film with teeth. In 1920s Montana, Phil Burbank (Benedict Cumberbatch) ostensibly shares the running of a cattle ranch with softspoken brother George (Jesse Plemons), but it’s clear to all who really stands atop the summit. Yet George manages to temporarily disrupt the fetid little world ruled by his cruel and charismatic brother when he falls in love with the widowed Rose Gordon (Kirsten Dunst), who moves into the Burbanks’ mansion and thus directly into Phil’s splatter zone. This tense, elegant Western from New Zealand filmmaker Jane Campion ("The Piano," "Top of the Lake") peels back the skin and sinews of its characters with the director’s typically penetrating insight. Kodi Smit-McPhee, Frances Conroy, Keith Carradine and Thomasin McKenzie also star. Rated R. Streaming on Netflix Dec. 1; also screening in select theaters.

To deepen your appreciation for Benedict Cumberbatch’s acclaimed performance in "The Power of the Dog," watch this bittersweet British melodrama. Cumberbatch plays James, a young man living with terminal cancer whose friends join him in the British wilderness for a celebration of (and farewell to) life. Now streaming on Tubi.

"Diary of a Wimpy Kid": Fans of Jeff Kinney’s beloved book series will be thrilled to know he wrote the script for this new adaptation that also apes his signature illustration style. Unlike the past four live-action "Diary of a Wimpy Kid" movies, this one deploys a simple CG-animated look to capture the heart and humor of the absurdities of middle school life. At just about an hour long, it’ll make for a breezy addition to any family movie night. Brady Noon, Ethan William Childress, Chris Diamantopoulos and Erica Cerra lend their voices. PG. Streaming on Disney+ Dec. 3.

"Silent Night": Get ready to add this one to your unconventional holiday movie watchlist. Keira Knightley and Matthew Goode star in Camille Griffin’s black horror-comedy, in which a photogenic British family gather together to celebrate one last apocalyptic Christmas. Roman Griffin Davis, Annabelle Wallis, Lily-Rose Depp and Kirby Howell-Baptiste also star. R. In select theaters and streaming on AMC+ Dec. 3.

There are few circumstances in which remaking a classic could possibly seem like a good idea, but Steven Spielberg and Tony Kushner lending their towering talents to a re-examination of one of the great American musicals is one such circumstance. Loosely based on the story of Shakespeare’s "Romeo and Juliet," "West Side Story" has stood the test of time thanks to its groundbreaking Jerome Robbins choreography, a breathtaking score from composer Leonard Bernstein and lyricist Stephen Sondheim and a classic film adaptation; Rita Moreno, who won an Oscar for that film, appears in a new role (and serves as an executive producer). Ansel Elgort, Rachel Zegler, Ariana DeBose, David Alvarez and Brian d’Arcy James star. PG-13. In theaters everywhere Dec. 10.

Since "West Side Story" is a retelling of "Romeo & Juliet," why not brush up on the original first? Filmed live on Broadway in 2013, this production stars Orlando Bloom and Condola Rashad as the eponymous star-crossed lovers. And while the production uses the original Shakespearean text, its modern day costuming and staging (Romeo drives in on a motorcycle!) helps make it more accessible for romance lovers everywhere. Now streaming on Tubi.

"Being the Ricardos": Break out the congas and crack open some Vitameatavegamin because Ricky and Lucy are back, baby! This starry awards season contender from writer/director Aaron Sorkin casts Nicole Kidman and Javier Bardem as the famed couple behind "I Love Lucy." And while opinions may vary on how well the stars embody Lucille Ball and Desi Arnaz, "Being The Ricardos" gives Sorkin a chance to do what he does best: Explore some tense backstage drama in an environment where your coworkers are also your family. J. K. Simmons, Nina Arianda, Tony Hale, Alia Shawkat, Jake Lacy and Clark Gregg also star. R. In select theaters Dec. 10; arrives on Prime Video Dec. 21.

"Don’t Look Up": It’s probably easier just to list the movie stars who aren’t in this star-studded dark comedy from "The Big Short" director Adam McKay. Leonardo DiCaprio and Jennifer Lawrence play two low-level astronomers trying to warn the world that a comet is about to destroy the Earth. Among those dealing with the impending catastrophe (or not) are Cate Blanchett, Meryl Streep, Ariana Grande, Timothée Chalamet, Tyler Perry, Jonah Hill, Rob Morgan, Mark Rylance, Himesh Patel, Ron Perlman and more actors than can possibly fit in one blurb. R. In select theaters Dec. 10; arrives on Netflix Dec. 24.

December 17: "Spider-Man: No Way Home" leaps into another "Spider-Verse"

After "Loki" gently eased the MCU into the multiverse over on Disney+ this summer, "Spider-Man: No Way Home" is here to kick the door wide open. When Peter Parker (Tom Holland) asks Doctor Strange (Benedict Cumberbatch) to use magic to help restore his secret identity, the duo accidentally unleash a multiversal catastrophe. We know for sure that Alfred Molina’s Doctor Octopus, Willem Dafoe’s Green Goblin, Jamie Foxx’s Electro, Thomas Haden Church’s Sandman and Rhys Ifans’ Lizard are among the villains hopping over from the past two "Spider-Man" movie universes. (Not to mention J. K. Simmons’ J. Jonah Jameson.) But will there be more surprises too? Like perhaps even a few other web-slingers? It’s anyone’s spider-guess! Zendaya, Jacob Batalon, Marisa Tomei, Jon Favreau and Benedict Wong also star. PG-13. In theaters everywhere Dec. 17.

See it first: "With Great Power: The Stan Lee Story"

What better way to prep for Spider-Man (and just maybe Spider-Men?) than with a look at the life and times of Peter Parker’s co-creator? This 80-minute documentary explores the incalculable reach of Stan Lee, the most famous name in comics and the undisputed king of high-profile movie cameos. Now streaming on Tubi.

"Nightmare Alley": Guillermo del Toro conjures up another gorgeous, grotesque world for this tragic neo-noir story. The second film adaptation of William Lindsay Gresham’s novel of the same name, del Toro’s take stars Bradley Cooper ("Silver Linings Playbook") as a handsome wanderer whose ambition and skills of observation guarantee his ascent through the ranks of a traveling carnival and beyond — until those same qualities get him into unlimited trouble. Rooney Mara, Ron Perlman, Cate Blanchett, Willem Dafoe, Toni Collette and a sizable percentage of the world’s great character actors also star. R. In theaters everywhere Dec. 17

"Swan Song": Two-time Oscar-winner Mahershala Ali leads this sci-fi drama about a man facing terminal illness. Unable to treat him, his doctor (Glenn Close) offers an unusual solution: Shield his family from grief by swapping out with a clone who can go on living his life. Naomie Harris, Awkwafina and Adam Beach also star in a movie that seeks to blend think-y sci-fi ideas with emotional human drama. R. In select theaters and on Apple TV+ Dec. 17.

December 24: Follow the white rabbit to "The Matrix Resurrections"

Neo’s back, folks. The fourth film in "The Matrix" franchise is also the first in nearly 20 years; this time around, Lana Wachowski helms the ship without sister Lilly. Still, she’s far from the only person returning to the story; expect to see Keanu Reeves, Carrie-Anne Moss and Jada Pinkett-Smith reprising their roles, alongside new cast members Christina Ricci, Yahya Abdul-Mateen II, Neil Patrick Harris and Jonathan Groff, among others. As for the story? You’ll have to follow the white rabbit into theaters (or into your HBO Max watchlist) to find out, just like the rest of us. R. In theaters and on HBO Max Dec. 22.

"The Matrix" is such a singular experience that even directors Lilly and Lana Wachowski could never quite match it again. But what they have done is spend the past two decades delivering all sorts of wonderfully gonzo, ahead-of-its-time sci-fi and fantasy stuff, from their Netflix series "Sense8" to their cult classic "Speed Racer" adaptation to those controversial "Matrix" sequels. Thus was born the gloriously goofy "Jupiter Ascending," a space opera take on "The Wizard of Oz" that casts Mila Kunis as a housekeeper/secret galactic princess and Channing Tatum as the half-dog/half-human she loves. It’s the sort of wacky, over-the-top space adventure you either vibe with or you don’t, but it’s worth trying to find out. Eddie Redmayne, Sean Bean and Doona Bae also star. Now streaming on Tubi.

More new movies opening the weekend of December 24 (and beyond)

"Sing 2": The first "Sing" movie seemed like a cheap cash grab: Cast a bunch of big name movie stars to play adorable singing animals in a jukebox musical full of pop hits. Yet it had an unexpected sense of genuine heart and humor that will hopefully carry over into this sequel, which features Bono as an aging lion who used to be a rock star legend. Matthew McConaughey, Reese Witherspoon, Scarlett Johansson, Taron Egerton, Tori Kelly and Pharrell Williams also lend their voices to this animated feature. PG. In theaters everywhere Dec. 22.