TAMPA, Fla. - Outside the only Hillsborough County clinic that’s offering COVID-19 testing, a line had already formed, hours before it officially opened on Monday.

It was a view that was similar to Sunday when the line of people wrapped around the West Tampa Community Resource Center on North Rome Avenue. It’s one of the few places in the whole Bay Area that doesn’t require an appointment. 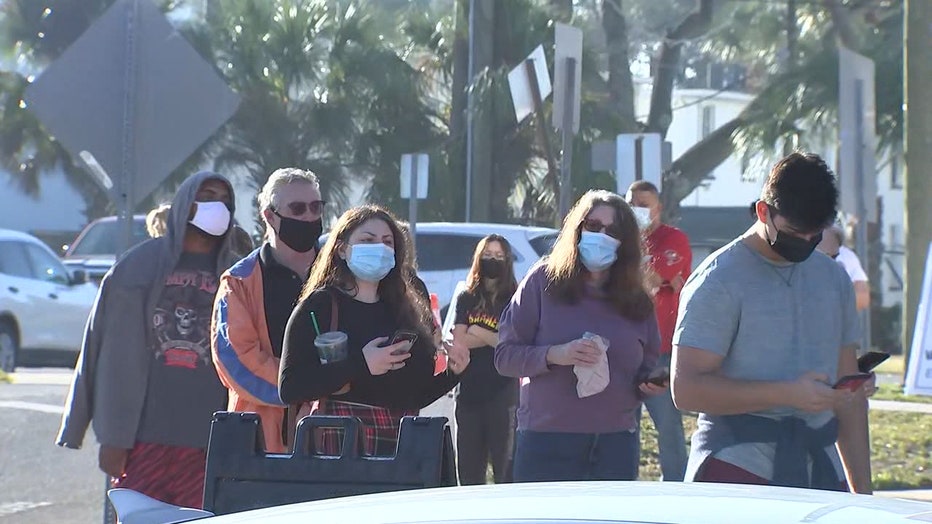 The line of people waiting outside the West Tampa Community Resource Center for COVID-19 test before it opened at 9 a.m. Monday, Dec. 27.

It is currently the only county-run COVID-19 test site and is open daily from 9 a.m. to 5 p.m.

Even though the lines at times were long, those getting tested Sunday told FOX 13 it was a smooth process -- taking anywhere from 10 to 45 minutes to get in and out.

Some getting tested here said it’s a requirement for them before going back to work, others said they want to be sure they’re not carrying something they could spread to others.

Many though said they’re surprised and disappointed by the lack of options when it comes to testing.

"What concerns me is the availability of the test, to purchase it or being able to have a test done, at the CVS or Walgreens or anywhere that does it," said Charlie Gammage, who drove with his family from Wesley Chapel to get the test. "I’d drive 100 miles to make sure my family is safe, that’s it, we want to be safe."

Smooth day for many at TPA despite nationwide delays, cancellations

Airlines canceled hundreds of flights Christmas day due to staffing issues because of COVID-19 and bad weather. At Tampa International Airport, there were about 26 cancellations Saturday, up from 22 the day before. That’s only about 6% of the total schedule, according to airport managers.

Several major pharmacy chains offer free COVID-19 tests, but they require an appointment, and right now, many are so booked that getting in could mean a long drive or waiting several days to get tested. Take-home testing kits have also become tough to find as some retailers placed a limit on how many people can purchase.

For those heading to the Hillsborough County site, be sure to bring your ID and insurance card if you have one.

The testing site at West Tampa Community Center will be closed on New Year’s Eve and New Year’s Day.

Florida is currently seeing its highest case rates since the start of the pandemic. On Christmas Day, the state recorded nearly 33,000 cases- a new single-day record which broke the previous record of nearly 32,000 cases set on Christmas Eve, according to the CDC.

The high demand was notable in other parts of the state.

At a drive-through testing site at Barnett Park in Orlando, hundreds of people waited in their cars in the dark before it opened, and it reached capacity by midday on Sunday.

"We just got back from the plane and everybody was coughing so we really wanted to see if we had COVID," Yaree Pierre told Orlando television station WFTV.

Aaliyah Reid told WFTV that she came early after exhausting other options and she’d do it again just for the feeling of safety.

"Honestly, I was expecting it because it was packed before Christmas, and I was like this is my last stop," Reid said. "CVS, Walgreens, all those were booked. Honestly this is the last resort, I’d come here at 3 a.m. if I had to."

LINK: For a list of COVID-19 testing sites, visit the Florida Department of Health's website by clicking here.