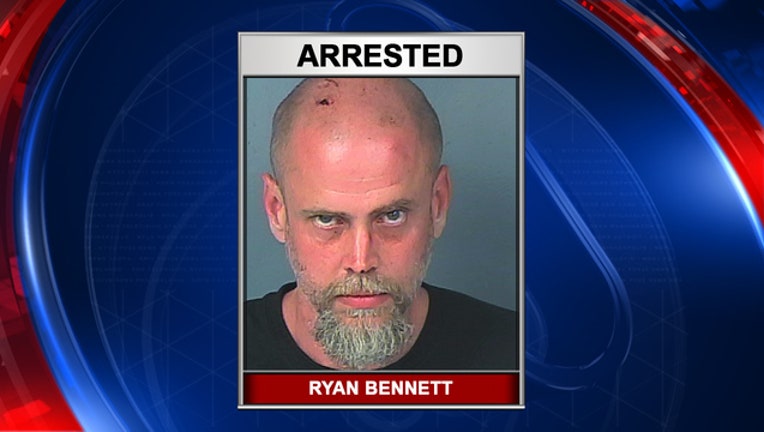 SPRING HILL (FOX 13) - A Hernando County man was taken down by a sheriff's K9 after he reportedly bit the face of his ex's new boyfriend.

Deputies say the situation came to a head when Bennett showed up at his ex-girlfriend's home on River Road around 2 a.m. Wednesday morning. But the incident had actually begun the day before.

Bennett apparently went to his ex's house multiple times on Tuesday, December 26. When he showed up again, his ex came outside and asked Bennett to leave, according to deputies.

But when her new boyfriend came outside to mediate the situation, deputies say Bennett picked up a metal wand from a pressure washer and began swinging at the man.

That's when a neighbor called 911 - telling dispatchers they saw someone being attacked with a metal rod.

Deputies say the man managed to knock the metal rod from Bennett's hands and put him into a "bear hug," to subdue him. During the struggle, Bennett managed to bite the man's face, next to his left eye, according to deputies.

Bennett struggled loose and ran off, hiding in a neighbor's backyard. That's when deputies showed up.

They enlisted their K9 deputy, Valor to track Bennett, who deputies say refused to comply with lawful commands. K-9 Valor engaged Bennett, biting him in his left forearm.

Bennett was taken to the hospital and then released to deputies who placed him under arrest.