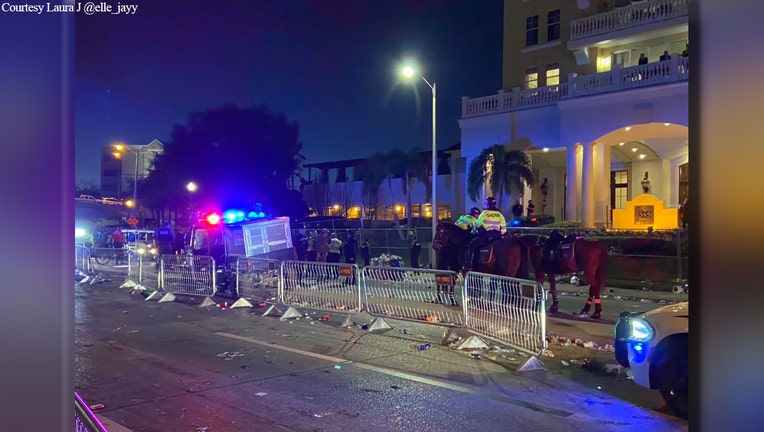 TAMPA, Fla. - A dog is dead after being shot by a mounted Hillsborough County deputy near the Gasparilla parade route on Saturday.

According to the Hillsborough County Sheriff’s Office, a 70-pound pit bull broke free from a gate its owner had tied the dog to at 345 Bayshore Blvd. around 6:30 p.m.

Deputies said the dog charged at the horses, attempting to attack them three times.

According to HCSO, the first time, the dog ran toward a horse with the Tampa Police Department mounted unit, barking and growling at the horse as it tried to bite the horse’s hind legs. A deputy nearby attempted to deploy his Taser on the dog, but could not establish a clear point of contact without potentially tasing the horse.

The dog ran back to the side of the road before running towards the horses a second time, this time towards Romeo, a 16-year-old horse that has been with the HCSO Mounted Unit for 14 years. The dog attempted to bite the horse in its sheath area and successfully latched onto the horse on one of its front lower legs, biting the horse on the protective covering on its leg

The dog unlatched and charged at the horse a third time. That’s when Deputy Crystal McClelland, who was riding a separate horse, shot the dog once on the center of its back, causing the dog to finally retreat from the horses. The dog died from its injuries at the scene.

According to HCSO, the owner of the dog, who is homeless, was present during the attacks, but did not try to grab the dog as it attacked the horses.

After the shooting, deputies said the dog’s owner began making threatening statements to harm the deputies on scene and himself. He was Baker Acted and a knife was located in his pocket.

“It is never an easy decision for a deputy to deploy their weapons, especially for a member of our Mounted Unit, deputies who have dedicated their lives to working with animals, to use force against one,” said Hillsborough County Sheriff Chad Chronister. “While it is extremely upsetting that a dog lost its life in this incident, there could have been many more injuries and potential losses had the horse been badly injured, not only to the horse itself, but also to the deputy riding him, the crowd of people walking nearby on Bayshore Blvd. and the other horses who could have reacted due to their herd mentality. We are extremely thankful that this incident did not end with any more casualties.”

Deputy McClelland has been with HCSO for 26 years, a member of the Mounted Unit for 18 years, and she has no prior shooting incidents.

According to HCSO none of the horses were seriously injured during the attacks.