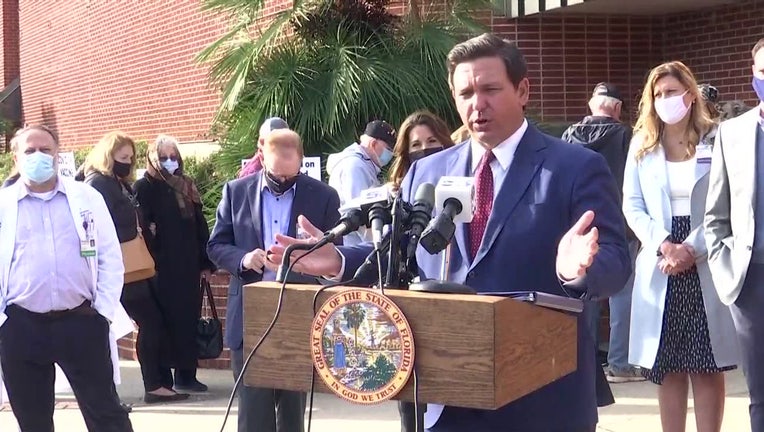 TALLAHASSEE, Fla. - Gov. Ron DeSantis strongly reaffirmed his opposition to local government officials’ attempts to impose their own rules to curb the spread of COVID-19, saying Wednesday that such measures "are not effective."

"Floridians should not be prohibited by local governments from working or operating a business," the governor declared in a Sept. 25 executive order.

The order, which was extended in November, suspended the collection of penalties and fines for violations of such things as local face mask ordinances, though it stopped short of an outright ban on the ordinances.

"We’ve got to trust people," DeSantis said Wednesday. "Give them the information to, you know, ask that they use common sense."

In November, the mayors of Miami Beach, Sunrise, St. Petersburg, Hialeah and Miami Shores urged DeSantis to issue a statewide mask mandate to address recent increases in COVID-19, the disease caused by the coronavirus.

DeSantis was asked Wednesday about a letter from Pensacola Mayor Grover Robinson, who last month asked the governor to give local governments greater control over COVID-19 mitigation efforts.

In a Facebook chat on Wednesday, Robinson said there shouldn’t be statewide mandates or statewide prohibitions. But there isn’t much county and city officials can do other than impose local mask requirements, he said.

"I think local decisions should be made on local conditions," Robinson said. "If you get to a point where you're in the red, or really when you're in the yellow, you should begin that process of being able to make the determination for your local area."

The Florida Department of Health says the number of known cases of COVID-19 in the state rose by 17,783 Wednesday. According to the state's daily update, the total number of cases in Florida is now 1,409,906.

DeSantis’ executive order, which barred local emergency ordinances that could "prevent an individual from working or from operating a business," also prevents local governments from requiring restaurants to operate below 50 percent indoor capacity and requires local governments to quantify the economic impact and the public-health need for limits on indoor capacity below 100 percent.

When the order was first issued in September, the daily average of positive coronavirus cases over the prior 10 days was 2,704, with an average of 113 deaths being reported a day, according to Department of Health records.

Since mid-December, the state has averaged 109 deaths and 12,887 positive cases each day.