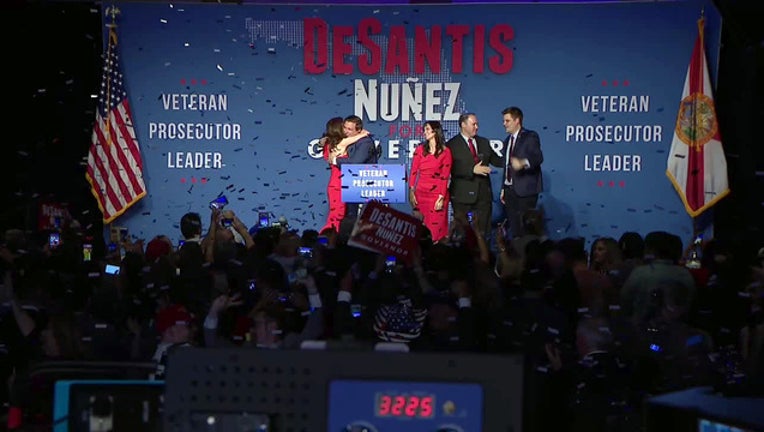 TALLAHASSEE (NSF) - For the second time, Ron DeSantis can declare victory in the 2018 Florida governor’s race.

The results of a state-ordered machine recount of the Nov. 6 election between DeSantis and Democrat Andrew Gillum were released Thursday, showing the former Republican congressman from Ponte Vedra Beach maintained a nearly 34,000-vote lead over his rival, according to the state Division of Elections.

DeSantis, who is slated to become governor on Jan. 8, only lost one vote from his lead in unofficial results that triggered the machine recount. Such recounts are required when margins between candidates are 0.5 percent or less.

The recount gave DeSantis a 33,683-vote lead, compared to a 33,684-vote margin in the tally of unofficial results released Saturday. DeSantis maintained a 0.41 percent margin over Gillum, with 49.59 percent of the vote to Gillum’s 49.18, the recount showed.

“Those returns remain clear and unambiguous, just as they were on election night, and at every point throughout this process,” DeSantis said in a statement. “I remain humbled by your support and the great honor the people of Florida have shown me as I prepare to serve as your next governor.”

However, Gillum, who conceded the race on election night but later retracted his concession as the vote margin narrowed, indicated he is not ready to give up on the race.

“A vote denied is justice denied --- the state of Florida must count every legally cast vote. As today’s unofficial reports and recent court proceedings make clear, there are tens of thousands of votes that have yet to be counted,” Gillum said in a statement. “It is not over until every legally casted vote is counted.”

But unlike races for the U.S. Senate and state agriculture commissioner, which are headed for statewide manual recounts because the victory margins were less than 0.25 percent, the major vote counting in the governor’s race is over.

County elections officials are scheduled to file their official returns to the state by noon on Sunday, with the state Elections Canvassing Commission meeting Tuesday to certify the results.

A ruling Thursday by a federal judge leaves open the possibility of more votes in the governor’s race. U.S. District Judge Mark Walker issued an order giving potentially thousands of Florida voters a chance to fix their ballots by this weekend, if they were rejected because of mismatched signatures.

But Walker rejected a request from U.S. Sen. Bill Nelson, who is trailing Gov. Rick Scott by about 12,600 votes in their Senate race, to extend the recount deadlines. Several counties reported they were unable to complete the machine recounts by the 3 p.m. Thursday deadline, including Palm Beach and Broward counties.

As of Thursday, Gillum had not filed any lawsuits contesting the election.

However, his lawyer, Barry Richard, told MSNBC earlier in the week that Gillum was “reviewing his options” on a lawsuit, expressing concern that the election showed that Florida’s laws are impacting “the fundamental right to vote.”

“He feels an obligation to ensure that votes are counted and not to sit back when we’re beginning to learn that they are not being counted for a number of reasons,” Richard told MSNBC.

Gillum would have up to 10 days following the certification of the election outcome on Tuesday to file a lawsuit contesting the results, according to state law.

In his statement, DeSantis said the election, which drew a record number of voters for a gubernatorial race, was a “vigorously debated” contest of ideas. But he said the campaign has to “give way to governing and bringing people together to secure Florida’s future.”

He extended an offer to Gillum to join him in “a conversation” about the state.

“We have both traveled the state and met Floridians from all walks of life. Sharing these experiences will, I believe, help us unite our state and build toward unity on behalf of the people of Florida,” DeSantis said.