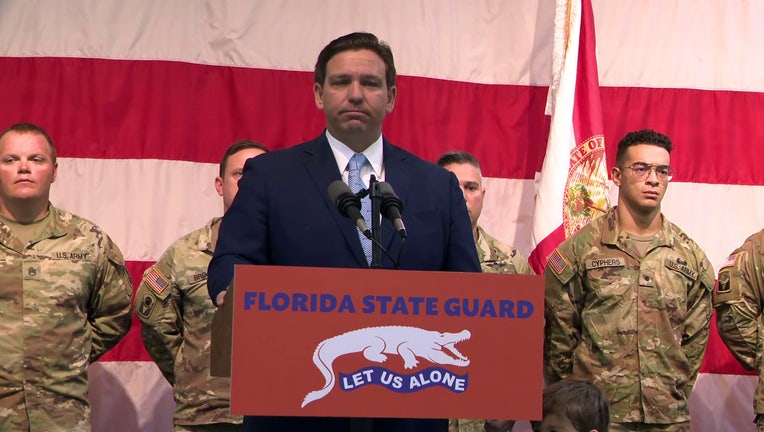 TALLAHASSEE, Fla. - Gov. Ron DeSantis outlined plans Thursday to ask lawmakers to increase funding for the Florida National Guard, as he seeks to expand the number of armories and re-establish a civilian volunteer force that would be directly under his control.

DeSantis said a budget he will propose next week for the 2022 legislative session will include $3.5 million to re-establish the Florida State Guard, which was a defense force set up during World War II to replace Florida National Guard members who were deployed abroad.

"This funding will support the necessary training, equipment and other support functions for up to 200 members who can aid in the response to hurricanes, natural disasters and other state emergencies," DeSantis said during an appearance at the Pensacola National Guard Armory. "We want to be able to have a quick response capability. And re-establishing the Florida State Guard will allow civilians from all over the state to be trained in the best emergency-response techniques and have the ability to mobilize very, very quickly."

The unit has been inactive since 1947 but remains in law as the Florida State Defense Force.

DeSantis said his budget requests also will include $87.5 million to expand the National Guard’s Miramar Readiness Center and to build three new armories across the state. An additional $8.9 million would go to upgrading armories. Another $2.2 million is being sought to build a new headquarters for the guard’s counter-drug program.

Also, DeSantis wants $5.1 million to support members of the guard seeking higher education and $12.2 million to go to scholarships for children and spouses of deceased or disabled veterans.

The governor’s budget proposal will serve as a starting point as lawmakers negotiate a spending plan during the session, which will start Jan. 11.