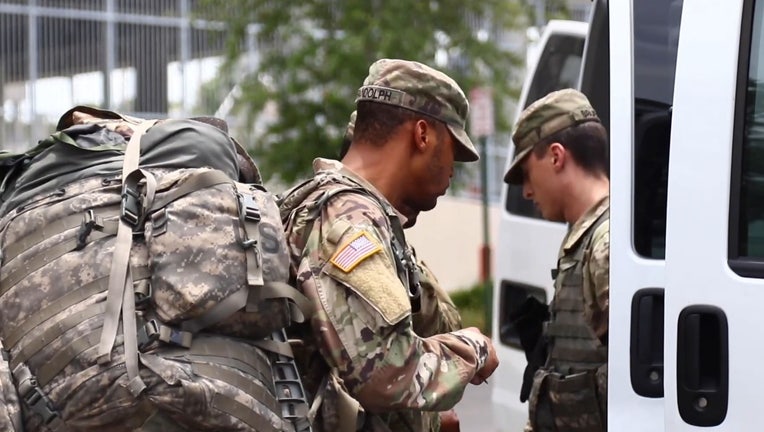 TALLAHASSEE, Fla. - Gov. Ron DeSantis on Wednesday said 500 members of the Florida National Guard were en route to Washington, D.C to assist during the police-brutality protests that have gripped the nation's capital.

“The federal government has helped out Florida in a number of different ways since I’ve been governor and obviously before. So, when they had a request, I feel like it was important to step up and to help out with that,” DeSantis said during a news conference in Orlando.

The request was made by U.S. Defense Secretary Mark Esper, DeSantis said. It came less than two days after law-enforcement officers drew national headlines by forcibly dispersing a crowd of peaceful protesters outside of the White House so that President Donald Trump could walk to St. John’s Episcopal Church to take a photo.

Maj. Caitlin Brown, a spokeswoman for the Florida National Guard, said the guard members will assist local law enforcement efforts in response to the protests, but their exact mission has not been determined.

DeSantis has activated up to 700 members of the National Guard since Saturday, when protests began to flare in various parts of Florida. So far, guard members have assisted law enforcement officers in Tampa and Fort Lauderdale at the request of local officials, Brown said.

“The Florida National Guard has not been requested by any other cities in Florida, but are ready if needed,” she told The News Service of Florida.

As demonstrations continue, DeSantis told reporters he will not tolerate rioting and looting in the state and thanked peaceful protesters for engaging in “lawful First Amendment activity.”

Related: Dozens of protesters arrested in Tampa overnight after peaceful rally gets rowdy

“Statewide, there have been respectful gatherings of large crowds, with isolated instances of individuals who take the opportunity to exploit these events, usually at night, to engage in unlawful activities,” the governor said.

Wednesday was the first time DeSantis answered questions from reporters about the unrest that has gripped the nation. When violent and chaotic protests erupted in Florida over the weekend, the governor did not issue a statement, but he responded by activating the National Guard.

It wasn’t until Monday afternoon that his office released a statement that said DeSantis was “appalled” by the death of George Floyd, a black man who was killed while in police custody under the knee of a white Minneapolis police officer. Floyd’s death touched off the nationwide protests.

“I think you’ve got to look at swift accountability, not just for the officer that had the knee but the other ones that didn’t do anything,” DeSantis said Wednesday.

DeSantis emphasized the need for accountability for officers who abuse power, noting that “you do have some people who think they can get away with everything.” But he did not address the racial tensions motivating many of the protests across the nation.

“They think the badge gives them the ability to treat people poorly,” the governor said. “You got to identify those people and you got to get them out. When you do that, I think that the rule of law is better, and I think our citizens will be safe as a result.”

After Floyd’s death, DeSantis said he “immediately” called the Florida Department of Law Enforcement to make sure state police were not trained to use the tactic that killed the 46-year-old man.

“Sure enough, in the state of Florida, you do not put a knee on a neck like that. That is not good training,” the governor said.