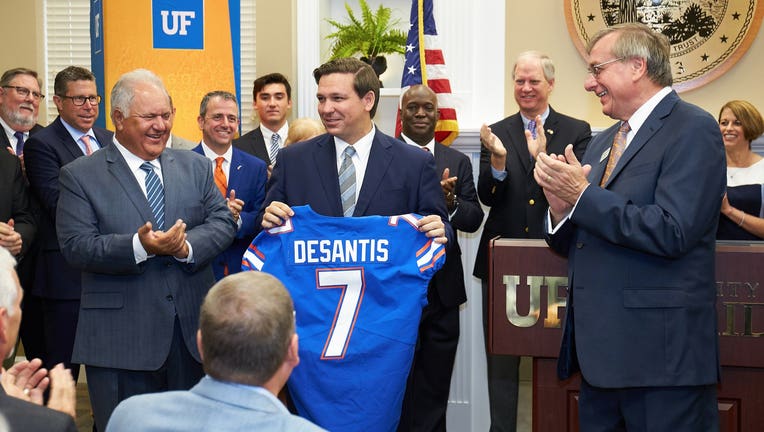 Gov. Ron DeSantis holds up a Florida Gators jersey during his September 2019 announcement of the university's #7 ranking in US News' list of the country's best colleges. (Courtesy: University of Florida/Twitter)

TALLAHASSEE, Fla. - Gov. Ron DeSantis, who captained his university’s baseball team, backed California-style legislation Thursday that would allow Florida college athletes to cash in on their names and images.

DeSantis told reporters he supports the direction of bills filed for the 2020 legislative session that propose what he said is needed reform for college athletes.

Calling the legislation a “reasonable path forward,” DeSantis said he thinks lawmakers should tackle the proposals during the session that starts Jan. 14.

“There are going to be issues that need to be addressed,” he said. “But I’m confident that those issues can be addressed in a way that will maintain college athletics as being a really special thing, but also provide the ability for our student-athletes to benefit just like anybody else would be able to benefit.”

California Gov. Gavin Newsom last month signed into law a measure that, starting in 2023, would allow California college athletes to hire agents and sign endorsement deals. The students wouldn’t be paid by the schools.

The NCAA, which did not immediately comment Thursday after DeSantis’ news conference, warned California that schools in the state could be blocked from intercollegiate events because the law could provide an unfair recruiting advantage.

NCAA President Mark Emmert, along with other members of the organization’s board of governors, lobbied against the California proposal, noting in a Sept. 11 letter to Newsom that “member schools are already working on changing rules for all student-athletes to appropriately use their name, image and likeness in accordance with our values --- but not to pay them to play.”

DeSantis said with Florida potentially following California, the NCAA will be required to reevaluate its compensation structure.

“This is not like Delaware is doing this,” DeSantis said. “These are really big, powerhouse states when it comes to college athletics. I think that is going to require the NCAA to reevaluate.”

Four bills have been filed for the 2020 session, two by Republicans (HB 287 and SB 646) and two by Democrats (HB 251 and SB 582) that seek to allow college athletes to be compensated through endorsement deals that use their names, images and likenesses.

DeSantis was joined by three of the four bill sponsors on Thursday.

Rep. Chip LaMarca, a Lighthouse Point Republican who is sponsoring one of the bills (HB 287), pointed to the example of former University of Central Florida backup kicker Donald De La Haye, who in 2017 was deemed ineligible to play because he monetized YouTube videos.

De La Haye’s videos touched on personal topics that included kicking, a violation of an NCAA bylaw that says a college athlete “may establish his or her own business, provided the student-athlete’s name, photograph, appearance or athletics reputation are not used to promote the business.”

LaMarca, whose bill is similar to a version (SB 646) filed by Sen. Debbie Mayfield, R-Rockledge, said such NCAA rules create“unreasonable restrictions” on the 11,000 college athletes in Florida.

“This system of antiquated rules barring students from using their own name, their own image and their own likeness limits student-athletes' ability to reach their economic potential,” LaMarca said.

House Minority Leader Kionne McGhee, a Miami Democrat who filed one of the bills (HB 251), said the proposal is about “fairness.”

The Senate version (SB 582) of McGhee’s proposal is sponsored by Sen. Randolph Bracy, an Orlando Democrat who played basketball at the College of William and Mary. Their proposal includes establishing a task force to review by Dec. 1, 202, state and federal laws and regulations by the NCAA and other organizations about  compensation for student-athletes.

“The nine shoulder surgeries and the two knee surgeries that I had when I was here, that wasn’t Florida State. Florida State wasn’t laying on the table, it was me,” Simon said. “Florida State didn’t go through the rehab, it was me. I was still expected to make it to every class and graduate.”

While discussions in past years has centered on paying students who play the highest-profile sports, football and men’s basketball, DeSantis said the current proposals should help athletes in other sports.

The proposals, for example, would allow college athletes to be paid to promote local businesses or as instructors in youth camps.

“Just imagine a student-athlete being able to earn $10,000, $15,000,” said DeSantis, who was a captain of the Yale baseball team. “For a low- and middle-income family that really takes a big weight, a financial weight off their shoulders.”