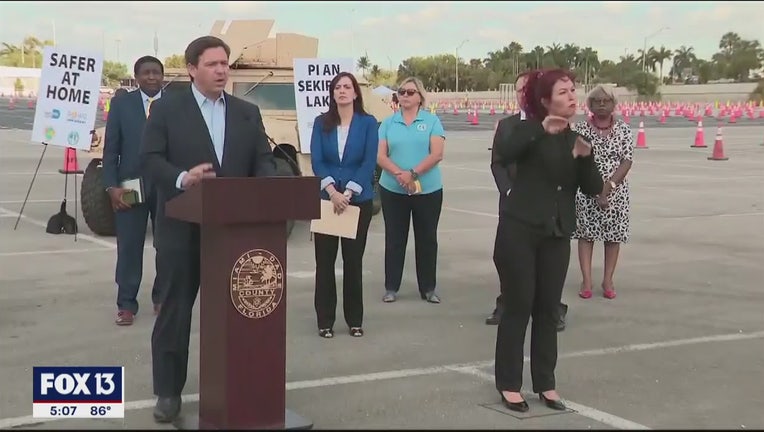 DeSantis repeated calls for people to be patient as the CONNECT claims system within the Department of Economic Opportunity has been inundated with new applications for benefits.

“We are working on it, but this is not just zero to 60. This is like zero to 120 trying to do it,” DeSantis said while at the Ballpark of the Palm Beaches in West Palm Beach where testing will start to be offered this week for COVID-19, the respiratory disease caused by the coronavirus.

The state has expanded call-center hours, reassigned 35 Department of Economic Opportunity employees to help handle claims, is hiring 100 more people and is bringing in an outside vendor to further assist with the increased workload.

DeSantis has signed an executive order that removed a requirement for people seeking benefits to apply for five jobs a week or to submit applications with Employ Florida, an online portal.

On Friday, the state announced February’s unemployment rate at 2.8 percent, representing an estimated 291,000 Floridians out of work from a labor force of 10.46 million. But was before the coronavirus caused bars, restaurants, hotels, theme parks and numerous other types of businesses to shut down or dramatically scale back in March.

“Now, you’re not just ramping up for a recession,” DeSantis said. “If you look at the unemployment claims nationwide and compare it to the financial crisis (of 2008 and 2009), it is way, way, way more significant.”

But Florida offers some of the lowest unemployment-compensation benefits in the country, up to $275 a week for 12 weeks. A group of Democrats on Monday held a conference call to demand that DeSantis waive a one-week waiting period before people can start to collect benefits; expand the number of weeks benefits are available from 12; consider workers’ most-recent quarter of earnings when calculating potential benefits as a way to help seasonal workers; and change eligibility requirements that currently include filling out an application that can take several hours.

Rep. Carlos Guillermo Smith, D-Orlando, said constituents continue to say they’ve been unable to get through “day and night” to get questions answered about error messages in the online system or to even simply reset their online application “PIN” numbers.

“We appreciate the few steps the governor has taken so far, but with all due respect, it took a period of about eight or nine days for that new criteria to even be available on the website,” Smith said, referring to the changes DeSantis made in the executive order. “The dissemination of information to applicants is well below any sort of acceptable standard.”

Rep. Anna Eskamani, D-Orlando, suggested DeSantis and his staff answer some of the calls to understand the struggles of Floridians.

“I do hope that it motivates us whenever we have our next (legislative) session, whether it’s a special session or after that, we tackle this system to make it better for the future,” Eskamani said. “Yes, this crisis is unprecedented. But that doesn’t mean that everyday Floridians don’t have their own crisis when they go on this website for support. It’s shameful the current safety net that we have for folks who are just trying to make ends meet.”

A $2.2 trillion federal stimulus bill approved last week is slated to provide an additional $600 a week, for four months, to people who qualify for jobless benefits.

But Sen. Jose Javier Rodriguez, D-Miami, said if people can’t work the CONNECT system to qualify for state unemployment benefits, they won’t be able to qualify for the additional federal assistance.

“We need this to be one of the priorities to get this system functioning,” Rodriguez said. “If we don’t get this right, those billions and billions of dollars, our tax money, is not going to be coming back to the state of Florida.”

Rodriguez suggested Florida follow states like Michigan and Georgia, which, through executive action, have extended the number of weeks people can receive jobless benefits.