NORTH PORT, Fla. - Getting behind the wheel of any fire engine or EMS rig comes with a certain level of risk, but distracted drivers should not be one of them.

“We can control how we drive and how we scan the areas, but there’s a lot of passenger vehicles that maybe aren’t doing the same regard,” explained Captain Dave Ingalls, North Port Fire-Rescue EMS Training. “We always have to keep in the back of our minds to be hyper-vigilant of these intersections and these roadways.”

On Thursday afternoon, North Port Fire-Rescue’s No. 84 headed out to help a car crash victim on Interstate 75. Before they could hit the interstate, a distracted driver crashed head-on into the crew.

Officials say the driver tried swerving to miss rear-ending another car, which had stopped for the EMS truck.

“You never want to respond to the responders. We heard the call go out over the radio and immediately everybody sprang to action. These are the people we work with and live with,” Dave said. 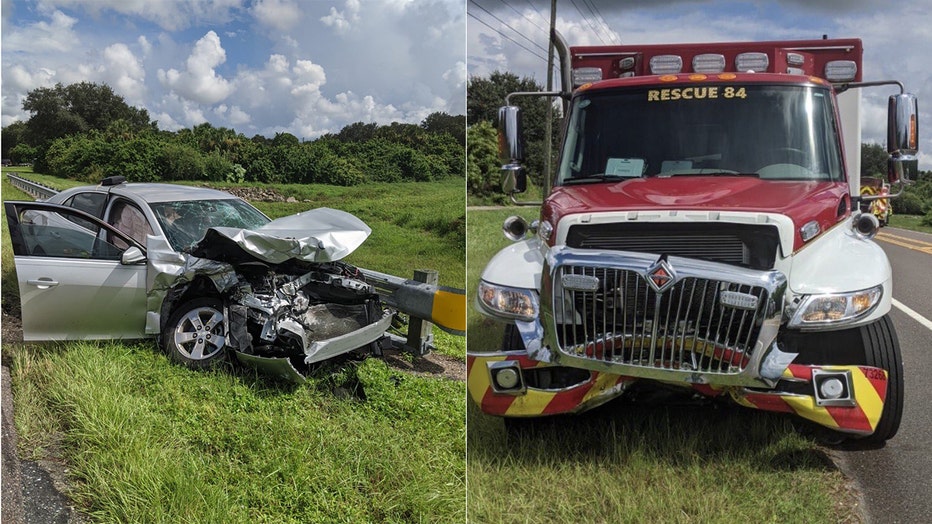 EMS crews say a distracted driver crashed into them as they responded to another crash.

EMS drivers undergo hundreds of hours in training before getting behind the wheel of a North Port Fire-Rescue rig. However, dealing with a distracted driver isn't necessarily a textbook lesson.

“They’re very aware and they understand the dangers of the vehicle, how to stop and how much distance they need, but when you’re that close to a vehicle it’s hard to make a decision that quick to stop. It’s an instant impact,” explained North Port Fire-Rescue Deputy Chief Scott Lane.

Both the EMS crew and the driver were lucky to walk away unharmed.

“It’s very easy to get distracted nowadays and it’s important you pay attention to the road,” Lane emphasized.

North Port Fire-Rescue crews hope this crash serves as a reminder for drivers.

The driver who caused the crash was cited. The crew hopes to be back at work before the week is over.