Dog owners take off after animals attack man in park

Brad Dillingham was playing disc golf at Picnic Island Park when he was attacked by dogs, but the dogs' owners left him there with wounds on his arm and leg.

TAMPA, Fla. - Police are searching for the owners of two dogs a man says bit him while he was playing disc golf Monday afternoon.

Brad Dillingham says he's still in intense pain from deep bite marks on his right hand and leg. He's also baffled the dogs' owners left him there without calling for help.

"The dogs started running toward me and I looked at the people to get some sort of acknowledgment and they shouted 'Oh, don't worry. They're fine. They're friendly,'" Dillingham FOX 13 News.

But when the dogs got to him, he realized they were ready to attack.

"I didn't feel a thing, but I think that might be because of trauma or shock," Dillingham recalled.

Dillingham was in an open area at Picnic Island Park in Tampa when the dogs attacked. 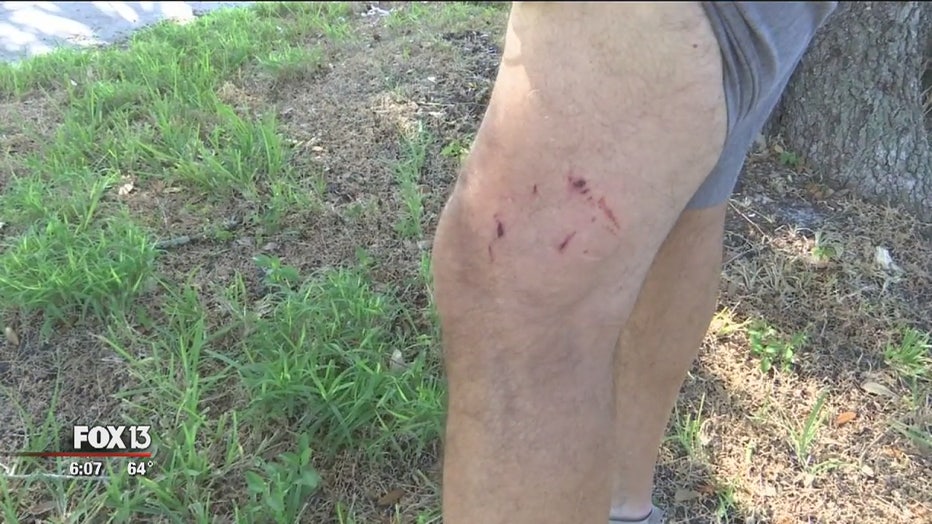 He said the other owner came over and grabbed the second dog, but didn't seem at all concerned, despite Dillingham's bleeding wounds.

When the second dog owner left, Dillingham said he tried going after him but was feeling weak from blood loss, so he went straight to the hospital instead. He hopes the people responsible come forward.

"I'm sure they were worried about getting a lawsuit or whatever, but to leave another human being bleeding out with no concern. Nobody came either. It's like if they went to go get help, help would have showed up, but nobody came," Dillingham said.

Doctors had to remove part of Dillingham's hand to help it heal, but he still has full mobility in his fingers.

Tampa police said anyone with information about the attack should call 813-231-6130.