Until Nov. 4, people can take a chance when they order a Halloween Roulette pizza from Domino's in Japan. The pizza features one random slice doused in a ghost pepper sauce.

JAPAN - Finally! A pizza fit for seven of your closest friends and one you absolutely hate!

Just in time for Halloween, Japanese locations of Domino’s are serving up a scare for their very brave — or very masochistic — customers: A new “Halloween Roulette” pizza, which contains a single unmarked slice doused in sauce made from ghost peppers.

The campaign, which runs through Nov. 4, allows customers to order any pizza of their choice before selecting the free “Halloween Roulette” option, which indicates that the kitchen staff has the go-ahead to spike one slice with a small amount of the seriously hot sauce. 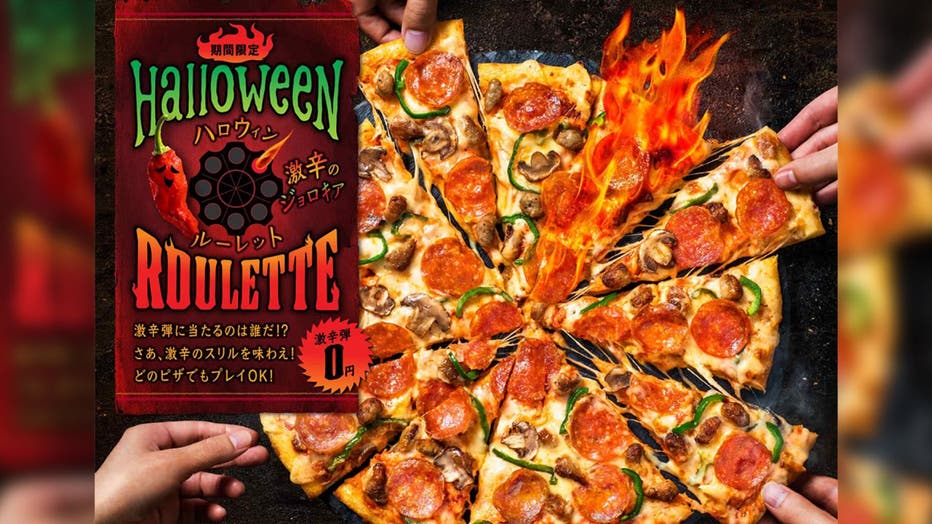 Through Nov. 4, Domino's Japan will spike any of its pizzas with ghost pepper sauce — free of charge — at a customer's request. (Domino's Japan)

Ghost peppers, or the Bhut jolokia, were once classified as the world’s hottest before being usurped by a couple of other strains, including the Carolina reaper. (The developer behind the Carolina reaper claimed to have bred a spicier chili in 2017, but that pepper — Pepper X — has yet to be recognized by the Guinness Book of World Records.)

Ghost peppers are still quite hot, and have even been mixed with grease and smeared on fences as a deterrent for elephants in some African and Asian countries, according to the Asian Elephant Specialist Group (ASESG).

And now, apparently, they’re on a pizza!

The amount of sauce Domino’s is slathering on, however, is said to be small, according to Japan Today, so the unluckiest among any given pizza-eating group “won’t suffer unbearably,” the outlet wrote. An Instagram post from Domino's Japan also appears to indicate that the sauce is applied with a dropper.

Domino’s is also putting special stickers on the box containing the Halloween Roulette pizzas, to prevent any confusion among folks who order multiple pies.

Get the latest on this story at FoxNews.com.