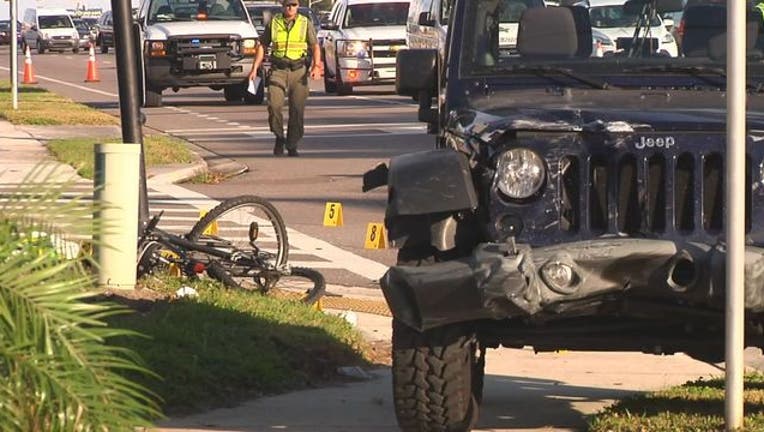 DUNEDIN (FOX 13) - Four people were hurt during a crash involving three vehicles, a pedestrian and a bicyclist Wednesday.

The Pinellas County Sheriff's Office said it happened around 1:30 p.m. at the intersection of Main Street and King Arthur Court.

It started when a 2013 Jeep Wrangler, driven by 33-year old Jedediah Williams of Clearwater Beach, pulled up to the curb lane of Main Street at the King Arthur Court intersection, heading west. A semi-truck was next to his Jeep, in the middle lane.

Meanwhile, 21-year old Sarah Olson, of Dunedin, was driving her 2015 Nissan Sentra east on Main Street. She was in the left turn lane to head north on Main Street. Investigators said she made the northbound turn in front of the semi-truck and the Jeep.

The driver of the semi slowed down to avoid hitting Olson's Nissan. But Williams, who was driving the Jeep, said he did not see Olson turning across traffic in front of him, because the truck blocked his view.

The Nissan continued on through the intersection, hitting the northwest traffic light pillar, then coming to a stop.

Simultaneously, Williams’ Jeep veered toward the northwest corner of the intersection. That's when it hit a pedestrian and a bicyclist.

Officers were investigating to see if alcohol or speed was a factor in the crash.