The launch of a SpaceX rocket taking a NASA spacecraft to an asteroid was captured by a wildfire camera on November 23, with the bright flash briefly lighting up the nighttime footage.(Credit: ALERTWildfire via Storyful)

Following the launch of NASA’s Double Asteroid Redirection Test (DART) asteroid defense mission in November of 2021, researchers in Switzerland created a simulation that predicts the method of deflecting a large asteroid away from Earth may work far better than previously believed.

Researchers from the University of Bern and the National Center of Competence in Research (NCCR) PlanetS observed data from past space missions, such as Japan’s Hayabusa2 probe mission, which found that some asteroids have far less solid interiors and more closely resemble a pile of rubble.

NASA’s DART mission managers previously simulated impacts on asteroids with more solid structures and predicted that, after impact, the asteroid will be left with a small crater and will be successfully deflected, according to a study based on the Swiss simulation published in The Planetary Science Journal earlier this month. 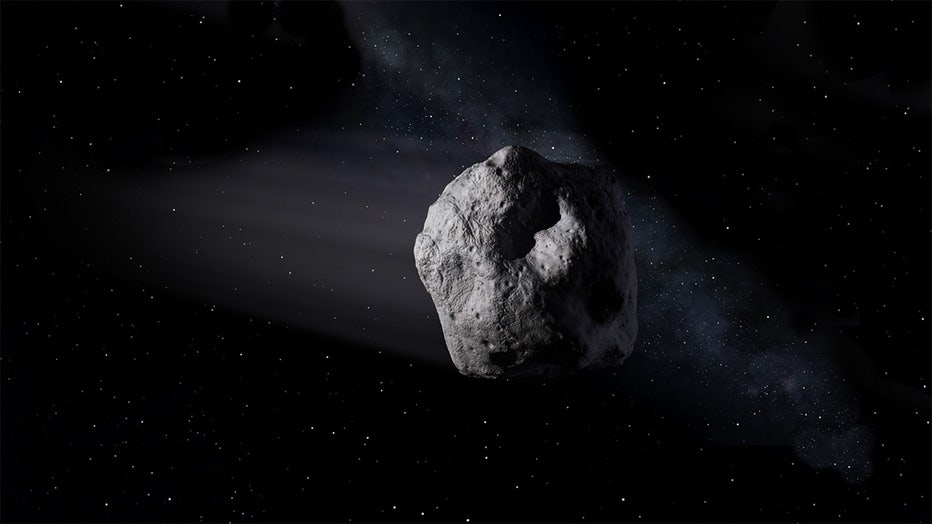 FILE - An illustration of an asteroid in space. (NASA/JPL/Caltech)

However, after this recent simulation, scientists now predict that instead of a small crater, an asteroid could be left completely deformed.

"The asteroid could also be deflected much more strongly and larger amounts of material could be ejected from the impact than the previous estimates predicted," study authors said.

Using a new modeling method, scientists were able to show different simulations of the aftermath of DART’s impact on Dimorphos, NASA’s target asteroid.

"One of the reasons that this scenario of a loose internal structure has so far not been thoroughly studied is that the necessary methods were not available," study lead-author Sabina Raducan said in a university news release. "Such impact conditions cannot be recreated in laboratory experiments and the relatively long and complex process of crater formation following such an impact – a matter of hours in the case of DART – made it impossible to realistically simulate these impact processes up to now." 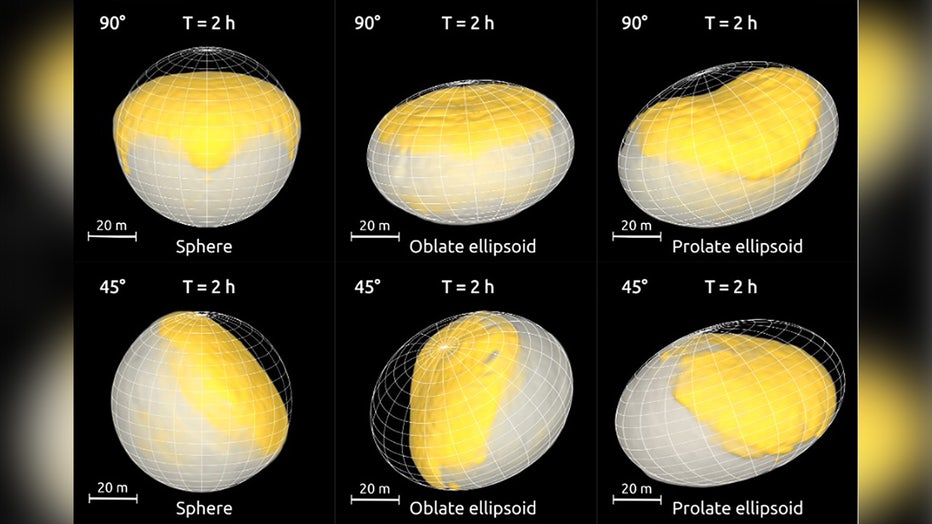 Asteroid target morphologies after vertical and oblique DART-like impacts on spherical and ellipsoidal targets. Up to ~20% of the target material is displaced (denoted by the color). (Sabina D. Raducan and Martin Jutzi, The Planetary Science Journal, June 2022 via University of Bern news release)

"With our novel modeling approach, which takes into account the propagation of the shock waves, the compaction and the subsequent flow of material, we were for the first time able to model the entire cratering process resulting from impacts on small, asteroids like Dimorphos," Raducan added.

The DART mission launched on Nov. 23, 2021, aboard a SpaceX Falcon 9 rocket from Vandenberg Space Force Base in California. 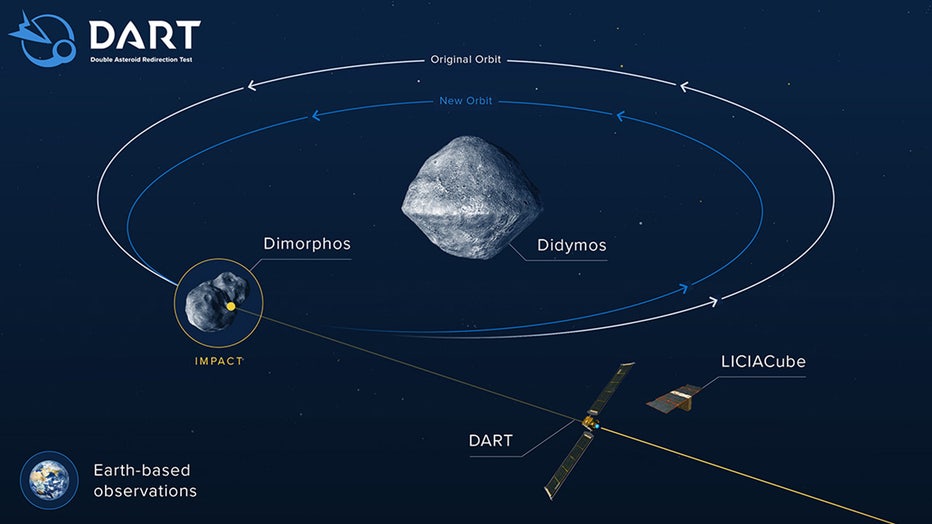 The spacecraft will cruise for over a year until it deliberately flies into the path of a binary near-Earth asteroid in space to change its motion, set for Sept. 26, 2022, at 7:14 p.m. ET, according to NASA. The target is Dimorphos, a secondary body or "moonlet" of a larger asteroid, Didymos.

While the Didymos primary body is about a half-mile (780 meters) across, its moonlet is about 520 feet (160 meters) in size, "which is more typical of the size of asteroids that could pose the most likely significant threat to Earth," the space agency states on its website. 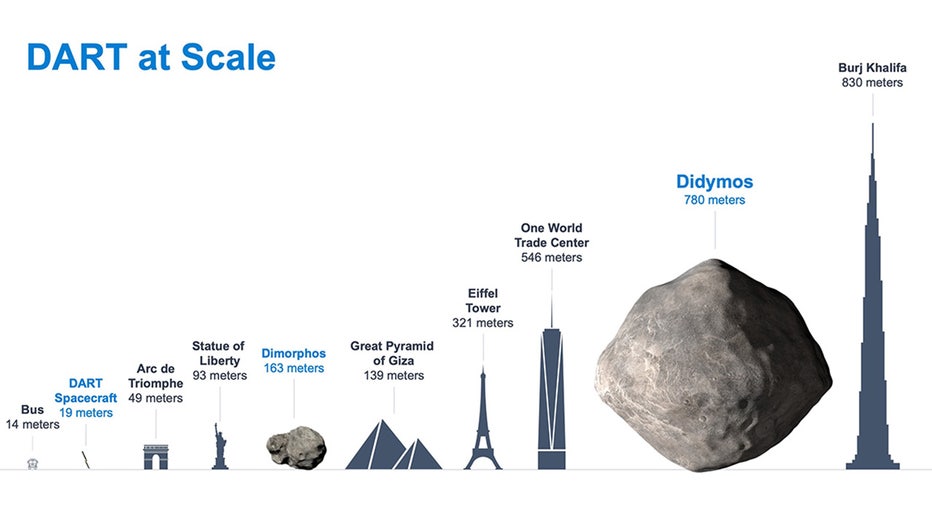 FILE - Infographic showing the sizes of the two asteroids in the Didymos system relative to some objects on Earth. (NASA/Johns Hopkins APL)

NASA said the two asteroids are not a threat to Earth, but because they do pass close to the planet, Didymos and its small moonlet were chosen for the mission.

After colliding with Dimorphos, when the binary asteroid is within 6.8 million miles (11 million kilometers) of Earth, ground-based telescopes and planetary radar will be able to measure the moonlet’s change in momentum. Images returned from DART’s onboard instrument will stream back to Earth at the rate of one per second, the agency said.

Another small spacecraft contributed by the Italian Space Agency, described as the size of a shoebox, will also separate from the DART spacecraft several days before it makes an impact and capture images of the moment.

NASA said the overall goal of the mission is to determine how much the impact alters the velocity of the moonlet. Scientists believe the collision will change the speed of the moonlet by a fraction of 1% and alter its orbital period around the larger asteroid by several minutes.

"This technology could one day be used to deflect hazardous asteroids on a collision course with Earth," NASA said.

June 30 marks International Asteroid Day, a day sanctioned by the United Nations to bring public awareness of the risks of asteroid impacts, according to the Asteroid Day website.

In 2016, the United Nations and the Association of Space Explorers (ASE) declared June 30 as International Asteroid Day to commemorate the anniversary of the Tunguska impact over Siberia, Russian Federation, on June 30, 1908. 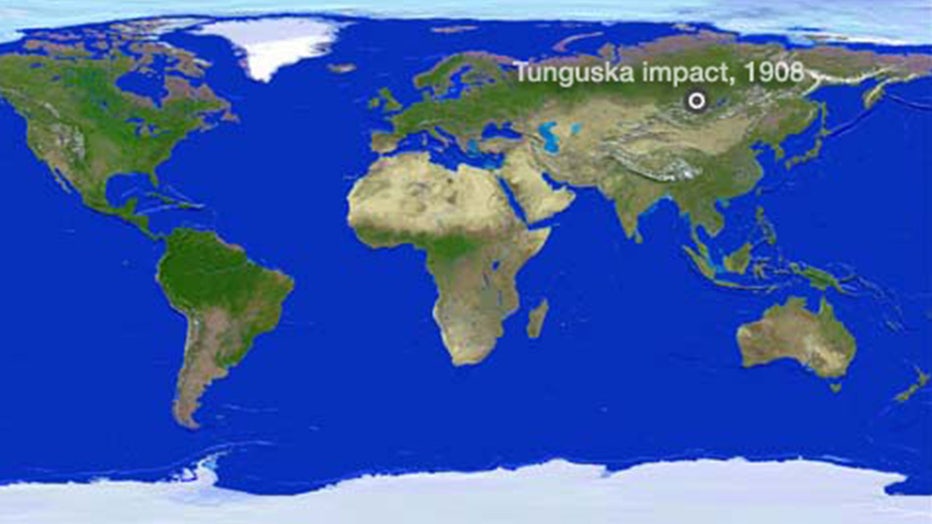 FILE - World map showing the location of the Tunguska impact of 1908. (NASA)

The Tunguska impact resulted in 500,000 acres of flattened uninhabited forest, scorched land, "glowing clouds" and shock waves that were detected around the world, according to NASA.

Scientists hypothesize the asteroid was roughly between 164 and 262 feet in diameter and entered Earth’s atmosphere at about 34,000 miles per hour, depositing the energy of a 10 to 30 megaton explosion.

The most mysterious thing about this event was that no crater and no fragments or remnants of an asteroid were ever found. The most likely explanation scientists have been able to come up with is that a celestial body did collide with Earth but exploded in the atmosphere, creating the powerful shockwave that followed and resulted in the physical manifestation on the ground, NASA said.

The likelihood of an event such as Tunguska happening again in our lifetime is slim but it doesn’t mean it won’t, according to NASA.

"Because there are so few observed cases, a lot of uncertainty remains about how large asteroids break up in the atmosphere and how much damage they could cause on the ground," said Lorien Wheeler, a researcher from Ames, working on NASA’s Asteroid Threat Assessment Project. "However, recent advancements in computational models, along with analyses of the Chelyabinsk and other meteor events, are helping to improve our understanding of these factors so that we can better evaluate potential asteroid threats in the future."

Kelly Hayes contributed to this report. This story was reported out of Los Angeles.