TAMPA, Fla. - The Tampa Police Department pushed back Thursday on accusations that officers used rubber bullets and tear gas to disperse peaceful protesters as a letter from Hillsborough County's black elected officials called for answers from TPD on its use of force practices, especially during local protests in response to George Floyd's death in Minneapolis.

Members of the Florida Legislature, Tampa City Council, Hillsborough County Commission, and the School Board for Hillsborough County Public Schools signed the letter condemning the "use of force or violence by law enforcement against any protestor who peacefully exercises their rights to the freedom of assembly and expression."

“As elected officials in the community, we've all heard from different folks about things that have happened to them while they were trying to peacefully get their message out," explained Hillsborough County School Board member Tamara Shamburger. "So we're concerned about some calls that we've gotten about folks being, what they perceived as being harassed or being bothered by the police."

According to the letter, at least three incidents have been reported. On May 30 and again on the evening of June 2 into the morning of June 3, TPD allegedly shot rubber bullets and tear gas to disperse a "peaceful gathering of protestors at Cyrus Greene Park" and in downtown Tampa.

The third incident happened June 1. According to the letter, the incident was not associated with protests, but "is equally disturbing." The letter states that officers used force against an unarmed black man on the grounds of Tampa General Hospital.

To reiterate our recent joint statement against the rioting by those who crossed the line from civil disobedience to destruction, we maintain our united call for peace. But make no mistake: in order for our community to experience the healing that it desperately needs, all stakeholders must be equally committed to doing their part to attain peace. This means that law enforcement must be held accountable for its actions as well.

It is time for a new era of common-sense reforms to ensure greater transparency in policing and stronger limits on the use of force. Hence, we, the undersigned black elected officials, call on Mayor Jane Castor and Tampa Police Department Chief Brian Dugan to end the wrongful practice of the use of force during otherwise peaceful protests immediately. We further call on Mayor Castor and Chief Dugan to provide with respect to the aforementioned incidents an accounting of the officers’ actions, a report on what corrective action, if any, TPD has taken based on complaints about the officers’ conduct and/or feedback from the community, and an explanation to the community as to why TPD used force against protestors engaged in peaceful and lawful actions in the first place. Further, the officers involved in the incident at Tampa General Hospital should be relieved of duty at this time until the investigation into their conduct is complete."

Tampa Police Chief Brian Dugan took responsibility Thursday for, what critics called, an unnecessary use of force when officers used rubber bullets and tear gas to disperse a crowd earlier in the week.

"For the past 6 days Tampa Police officers have worked tirelessly to provide an environment for our community members to have their voices heard.

During that time, we also witnessed these peaceful protests become hijacked by people who are not here to honor the memory of George Floyd but instead cause chaos in the city.

Let us be clear, we have never deployed tear gas or rubber bullets.

We will continue to work with peaceful demonstrators to make sure their rights are respected, as we have done in years past.

Throwing rocks, water bottles, mortars and weapons at our officers is not peaceful and endangers not only their lives but also the innocent people around them." 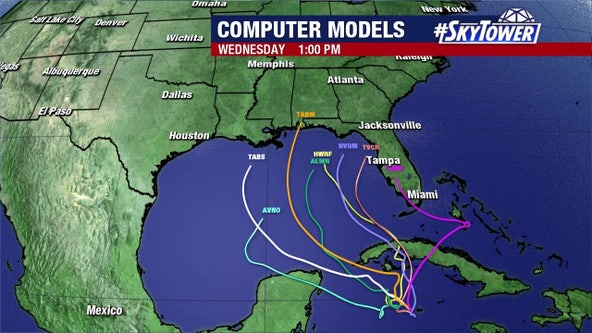