Everyone needs to wear a mask, emergency doctor says

Dr. Hilary Fairbrother, an emergency medicine physician in Texas, discusses the importance of mask-wearing amid the pandemic.

On Election Day, voters across the country will face varying rules about mask-wearing when they cast a ballot as officials try to balance public safety precautions amid a global pandemic with the constitutional right to vote.

Most states, even ones with broad mask mandates, are stopping short of forcing voters to use a face covering. Instead, they're opting for recommendations to wear them while providing options for voters who refuse.

“We are asking everyone at the polls to observe social distancing inside and outside of polling places, and not to create disturbances about wearing or not wearing face coverings,” said Meagan Wolfe, chief elections official in Wisconsin, where a state mask mandate applies to poll workers but not voters.

RELATED: Early voting in US tops 95M, more than two-thirds of all ballots cast in 2016

During the early voting period, disagreements over masks occasionally led to long voting lines and had election officials clearing polling sites for the mask-less or directing them to stations away from other machines.

Still, due to the decentralized nature of the country's voting systems, rules are different depending on where ballots are cast. Some places are taking harder stances than others.

In one case that caught national attention, a Maryland man was arrested after refusing to wear a mask while trying to vote last month. He has since sued his local election board over the incident.

In Texas, the issue has wound up in court.

First, Republican Gov. Greg Abbott carved out an exception for voting locations in his statewide mask mandate issued earlier this year. Then, in response to a challenge from voting rights groups, a federal judge ordered that masks must be worn inside polling sites. That decision was quickly reversed by an appeals court.

Despite the legal back and forth, at least some Texas elections administrators had chosen not to enforce the short-lived polling station mask mandate.

RELATED: Here are the Senate races to watch in the 2020 election

Wendy Weiser, director of the democracy program at the Brennan Center for Justice, said governments should be able to require masks at polling places during the coronavirus pandemic.

"Despite the few attempts to challenge mask requirements in court, there is no question that it is well within the legal authority of states and localities to require masks to be worn at polling places — both as a matter of public health and as a reasonable regulation of the election process,” she said. 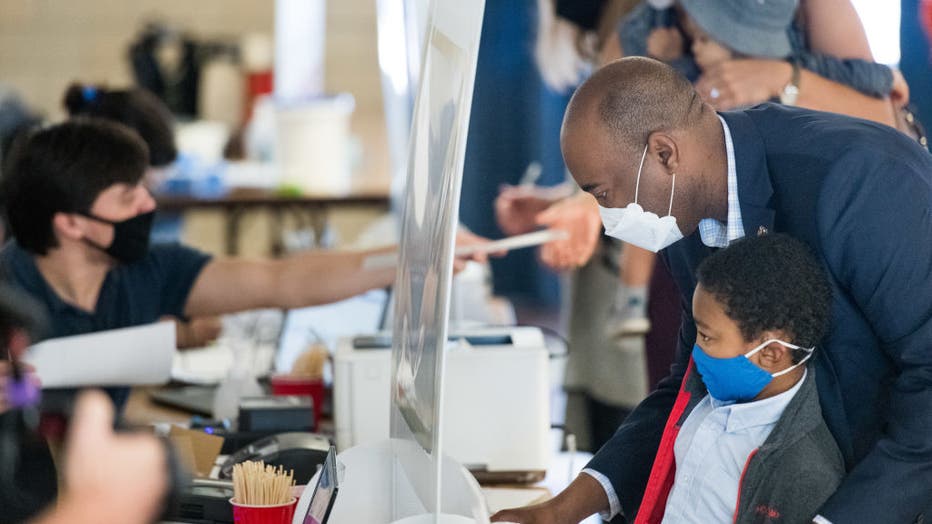 With Election Day looming, most places have settled on a strategy of strongly encouraging voters to wear masks. Their message is that abiding by widely accepted health guidelines will protect poll workers and other voters.

In Atlanta, Mayor Keisha Lance Bottoms over the weekend signed an extension of measures designed to limit the spread of the virus, including a mask mandate in the city. But her order specifically says “no individual shall be denied ingress or egress to or from a polling place for failure to wear a facial covering or mask.”

Gabriel Sterling, statewide voting system implementation manager for the secretary of state’s office, said during a news conference Monday that individual poll managers will have to decide how to accommodate people who have tested positive or are in quarantine. He suggested that one way to handle them might be pulling them aside and having them vote a hand-marked paper ballot away from everyone else, rather than having them use one of the touchscreen voting machines.

But he stressed that no additional barriers to voting can be put in place.

“You can’t turn away somebody because they’re not wearing a mask,” Sterling said.

Meanwhile, election officials across the country have scrambled to shore up polling place safety precautions to make it easier to recruit poll workers. Many of them have traditionally been older retirees — the type of people who are at greater risk of getting a severe case of the coronavirus.

RELATED: Some anti-maskers are wearing facial coverings made of mesh that offer no protection from COVID-19

The idea of staffing a polling place where voters aren't wearing masks was one reason Richard Baus decided to break over a decade of tradition and not work the election in his hometown of Dublin, Pennsylvania, this year. Even at 90-years-old during a global pandemic, Baus said he was considering returning as a poll worker but ultimately decided against it.

“Being a poll worker, you do come into contact with people, very close contact,” he said. “I would have been more inclined to work if they had a mask mandate.”

Virginia Elections Commissioner Chris Piper said voters who walk into polling places without wearing face coverings will be offered masks by poll workers. If they refuse to wear them, the voters will be asked to return to their cars and vote curbside. If they refuse to do that, they will be allowed to vote inside the polling location.

“Obviously, the goal is to mitigate that, to encourage the health and safety of everybody," Piper said. "But certainly if they refuse, they have to be offered a ballot.”

In Florida's Broward County, where there is a mask ordinance, elections spokesman Steve Vancore said just four out of 364,000 early voters refused to wear masks. They were allowed to cast ballots after they were separated from other voters.

“We tell them ’Sir or ma’am – it is mostly sir – you are not supposed to be in here without a mask. There is a county ordinance,” he said. “They mostly obey.”