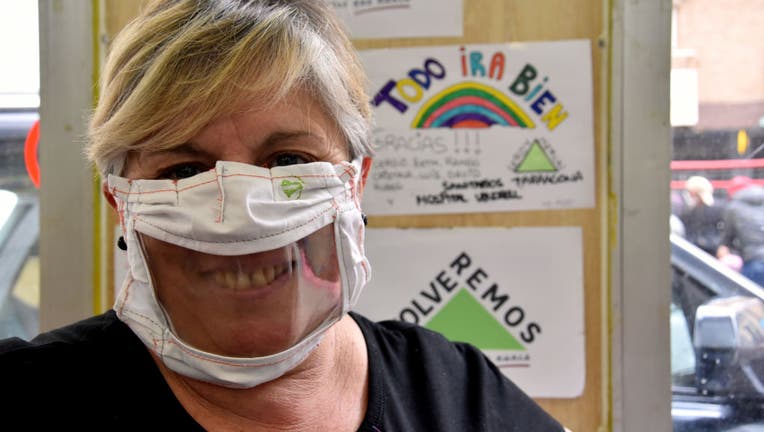 VENDRELL, TARRAGONA, SPAIN - 2020/04/22: A volunteer wearing a transparent cloth face mask for people with deaf and dumb relatives.A group of solidarity women have created the "Fils amb Cor" initiative (sewing with the heart) where they make clothing

SAN JOSE, Calif. - Whenever San Jose resident Jackie Collins needs to ask someone a question in public, she immediately hands the person two things: her cellphone with a message typed out and wet wipes.

Collins, who is deaf, relies on lip-reading to communicate with hearing people.

Santa Clara County requires people to wear masks in public in an effort to limit the spread of COVID-19, and when people wear face masks their mouths are completely covered.

This makes it difficult for Collins to understand what they are saying. Collins said she now asks people to type their responses on her phone, and she disinfects her screen once the exchange is over.

"Now that I can't read lips, I have to use my phone and text people," she said. "When they give it back, I wipe down my phone and then I give them another [wet] wipe."

According to the California Association of the Deaf, more than 363,000 deaf adults reside in the state. People who are deaf and hard of hearing use lip reading as "a supplement to the use of residual hearing, amplification, or other assistive listening technology."

According to the National Deaf Center, about 30 percent of English speech sounds are visible on the mouth.

Factors such as how much body language and facial expression a person shows when speaking can affect lip reading.

Wonha Park is the president of Bay Area Asian Deaf Association (BAADA), an Oakland-based organization that advocates for and serves members of the Asian American community.

He said in an email that deaf and hard of hearing people rely on visual cues to understand hearing people, which is why it is "very important" for people to show their facial expressions when they speak. Campbell resident Lisa Lynch said before people were required to wear masks outside, she didn't need to tell anyone she was hard of hearing. Lynch is able to lip read, and could respond directly to people's questions or comments.

"All of the sudden, when people started wearing masks, I had to tell people that I'm hard of hearing," Lynch said.

Lynch said not being able to read lips is frustrating for her, as people don't always understand how to communicate with those who are hard of hearing.

"Some people don't know what [hard of hearing] is, and they think it means to talk louder, but they don't need to talk louder," she said. "I can hear you, I just can't understand you because I can't read your lips -- it's frustrating sometimes."

Masks pose less of a problem for people who are fluent in American Sign Language, Park said, but when people who are deaf interact with those who don't know ASL, they tend to rely on their phone to communicate.

Like Collins, San Jose resident Michelle Ottinger said -- in ASL through an interpreter -- that she uses her phone to converse with hearing people when she is in public.

"I depend on my phone so much for communication, I type notes out and show people ... it has really saved me a few times," she said.

Ottinger describes herself as a "social person" who is open to interacting with strangers. However, now that masks make it hard to read lips and understand people, she even uses her phone to do her tasks, like ordering food, in order to avoid speech communication. "I try to avoid communication as much as possible because it's just too hard with the masks," she said. "I get in and get out [of stores] as fast as possible and try to keep to myself."

Although phones are a reliable method of communication, not everyone is open to texting back and forth. Teresa Truong, an Alameda County resident and secretary for BAADA, said -- also in ASL through an interpreter -- that some people don't want to take the time to read her messages.

"I've noticed that when I show people [the message on] my phone, sometimes they'll read it or nod and get it," Truong said. "But some people look away, so that's rough."

Truong said that while willingness to interact with her varies, the interactions can be frustrating. "Sometimes I just give up and move forward without communication," Truong said. Like Truong, Collins said that when she holds out her phone there are some people who aren't willing to communicate with her or respond rudely to her request.

"Most hearing people aren't reaching out to [deaf people], trying to communicate and understand [them]," Collins said. "The very least they can do is to give [deaf people] the information that they're asking for."

Although phones can help ease the communication barrier, there is another alternative. Clear masks and cloth masks with plastic inserts around the mouth region allow the lower half of a person's face to remain visible for lip reading.

There are companies that specialize in creating these masks, such as TheClearMask, a Baltimore-based firm that creates transparent surgical clear masks allowing for full-face visibility.

Other types of clear masks are made by hand and sold through social media outlets such as Instagram and online marketplaces such as Esty. While clear masks can help with lip-reading, Collins said the masks' usefulness depends on their quality. If the clear mask is homemade, the plastic can sometimes fog up while people are speaking or cause a glare if they are outside.

"Everyone's trying and I appreciate that," Collins said, "But I think [the usefulness] just depends on the quality of [the clear mask]."

Even though companies such as TheClearMask can create anti-fogging masks, Collins said it is unrealistic to expect everyone to wear a clear mask or shield all the time for people to lip read.

In that regard, the challenge for those who are deaf and hard of hearing resonates with a broader issue of how people are responding to COVID. "Not everyone wants to wear the shield," Collins said. "Some barely want to wear a mask."

* Interpreter provided by Northern California Registry of Interpreters for the Deaf.