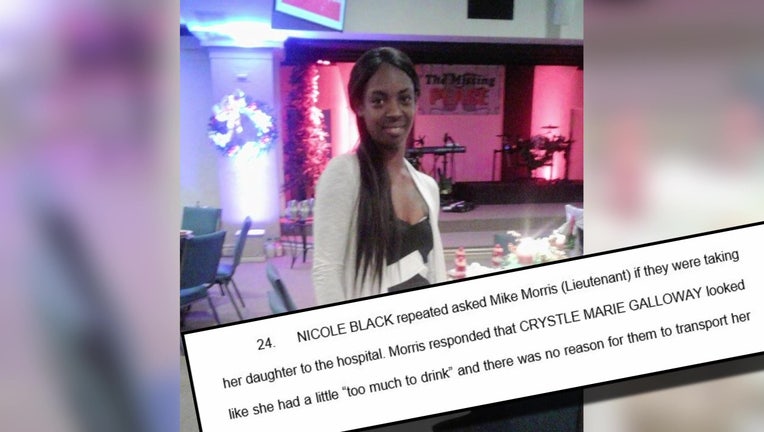 TAMPA, Fla. - Crystle Galloway was only 30 years old when she died in 2018. She left behind three children, the youngest now just 2 years old. Her family is now filing a lawsuit against Hillsborough County in an effort to get justice with the hopes of setting up a future for her young kids.

For Galloway's daughter, Jessica, the pain of losing her mom hasn't gone away.

"We would always paint nails, watch TV like on the weekends, sometimes we would just lounge around the house all day," Jessica recalled. "She was like my best friend to me."

Her mom now only existes in her memories.

"I just hope that this doesn't happen to other families," she said.

First responders arrived, but family said they felt like help never actually came. They claim the first responders questioned Galloway's ability to pay for an ambulance, adding that it seemed she had just had too much to drink. Galloway's mother, Nicole Black, was forced to drive her to the hospital herself.

Galloway slipped into a coma and died days later.

Three of those first responders were eventually suspended and one was fired, all due to gross negligence.

Black said it's not enough as she now files a lawsuit against the county with the hopes of setting up a future for her grandkids.

"Everything that my daughter offered them, I want to give to them," she said. "Stability, being able to depend on someone."

Black told FOX 13 she will not stop fighting until her family has justice.

"It will never be over for us," said Black.

Black's lawsuit has been filed against Hillsborough County Board of Commissioners, alleging that because these first responders were employees of the county, Hillsborough should be held responsible.