Those who have returned to damaged homes and businesses after Hurricane Ian are figuring out the best way to rebuild. Politicians and community leaders in Florida are calling for change on issues like affordable flood insurance, the quality of housing and where to rebuild after so many homes and neighborhoods were washed away by Ian.

Lorraine Regan thought she was going to die.

The only thing she wanted after Hurricane Ian lashed out in a fury on Sanibel Island last week was to let her kids know she survived one of the strongest hurricanes ever to strike Florida. Now, it will be a tale to tell generations about the harrowing ordeal she lived through.

The mother of four from coastal New Jersey had experienced tropical storms but never a hurricane like this.

For 20 years, Regan taught a middle school gym class in Lake Forest, Illinois. After retirement in June, she moved into her late grandmother's home on Sanibel Island. Before retirement, she purchased a condo to rent out at Seawinds, a canal-front development located at the island's east end. It was an investment that would later become a haven to ride out the storm.

When Regan first heard about Ian, which she thought was headed for Tampa, she opted to stay on the island with a population of more than 6,300 people.

She locked up her home and did everything she could to secure her belongings. She then decided to take shelter at her second-story condo, filling the bathtub with enough clean water to live on for a week and food to survive.

"I had no idea how bad it was going to be. I wish I had evacuated, but it was too late, so I just had to deal with it," Regan said.

As seawater rose from the Gulf of Mexico, cars in her parking lot began to submerge. The water kept coming.

"My kayak that was tied down shows up on my back deck. I was wondering if it was a sign," she recalled.

Water began to surround her inside the condo, seeping underneath her sliding glass storm doors and knocking at the front door.

"And the wind was unbearable," she recalled. "But I was worried more right than of the water coming in."

Water started to gush from all sides of the entry door, leaving her afraid the door was about to burst. She grabbed a coffee table and shoved it underneath the doorknob in an attempt to hold it tight.

WHEN WILL POWER BE TURNED BACK ON? RESTORATION FROM HURRICANE IAN COULD TAKE MONTHS

Yet the water started coming in faster – now up to her knees.

"I went upstairs. It covered the first stair, the second stair, the third stair. And I just kept counting the stairs," she said.

Regan called her children and a friend, who assured her that it was the high tide, but the water was rising like a broken spigot from a hard winter freeze.

"There was nowhere else to go," she feared. 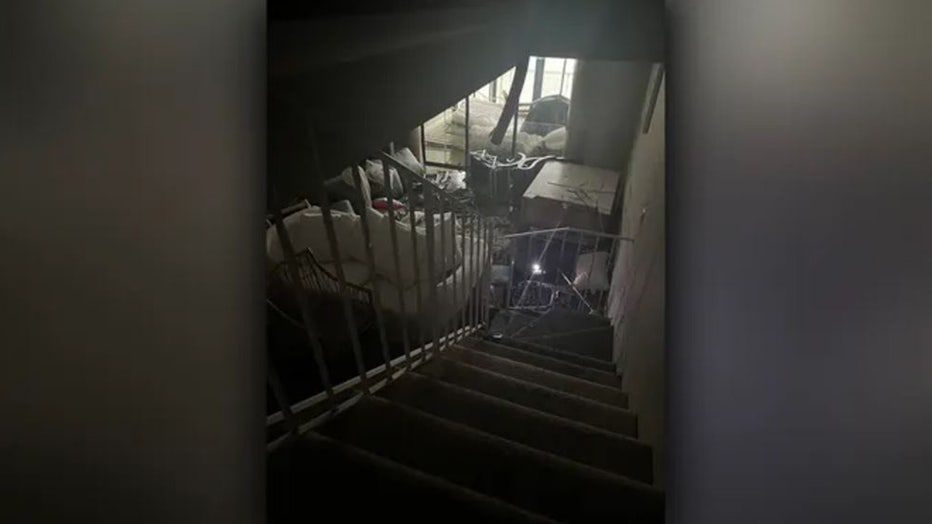 Lorraine Regan took shelter on the second floor of her condo at Seawinds, a canal-front development located at the east end of Sanibel Island, Florida, as water filled the bottom level during Hurricane Ian on Sept. 28. 2022. (Lorraine Regan)

The rising water continued for at least two hours before it started to recede, but Ian kept pounding.

"Boom. Boom. Boom. Nonstop," she recalled. "The wind was unbearable, just listening to everything that was happening outside."

Regan said there came a point she called her four children, who talked her through it, telling her it was going to be fine.

"They mentally helped me because I was losing it for sure," she remembers.

And then she lost connection with them.

Hurricane Ian made landfall at 3:05 p.m. Eastern in Cayo Costa, Florida. It came ashore with maximum winds of 150 mph, coming in just 7 mph short of a Category 5 storm.

At the time of landfall, Regan remembers she was now hunkering down in the middle upstairs bathroom with her dog, Lola.

"I just prayed for hours and just waited and waited. It just kept knocking nonstop," she said.

More than three hours would pass following landfall, and Regan said she could feel the storm was beginning to slow down.

"But it never lightened up the whole time," she said.

As she exited the bathroom and peered out her window, it was still too dark, and the rain was still coming down hard. Regan would soon fall asleep wondering what daylight would bring. 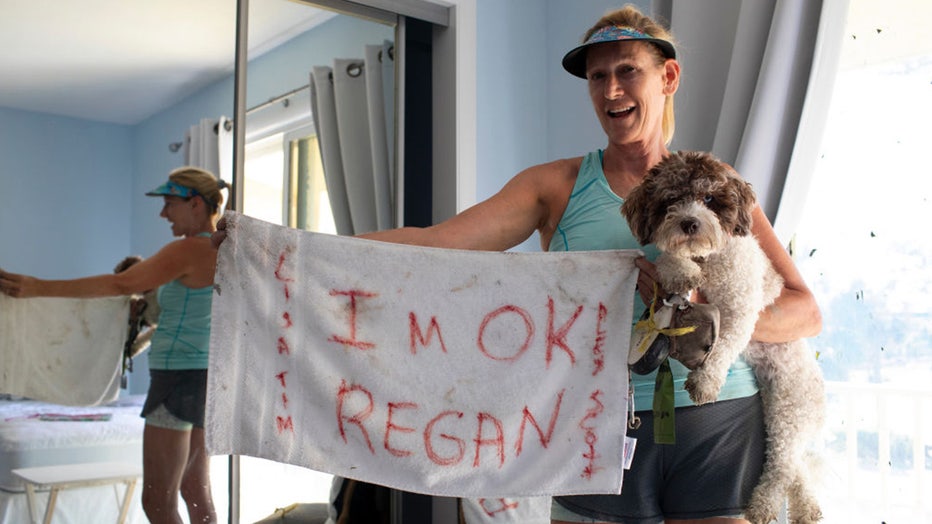 FILE - Lorraine Regan, who rode-out Hurricane Ian on Sanibel Island, FL, with her dog Lola, shares a sign on Oct. 1, 2022, that she raised toward rescue helicopters to try to let her children know she survived. (Ted Richardson/For The Washington Post via Getty Images)

The red marker and towel

As the sun began to rise over the popular tourist destination known for its shell beaches and wildlife refuges, the sound of rescue helicopters replaced the once peaceful voice of birds singing after an afternoon rainfall.

Worried about her children who thought she didn’t make it, Regan utilized a red marker and towel to write a message for her family and held it outside, hoping to catch a pilot's eye.

"I didn't even know if they saw it or not. I was just holding it up, just hoping to get the word out that I'm OK," she said. "I didn't want any of my kids to panic."

As Regan looked outside, she realized why she was in such a distraught mess.

"It was unbelievable with all the trees down, all the power lines down, boats on properties, and mud was everywhere," she said.

However, it was the first time Regan felt like she would be in safe hands. She remembers her kids telling her to be cautious during the storm.

"That's all I kept thinking about. I made it through this hurricane, now don't be stupid and wipe out in the mud and knock my head on a rock or something," she said. 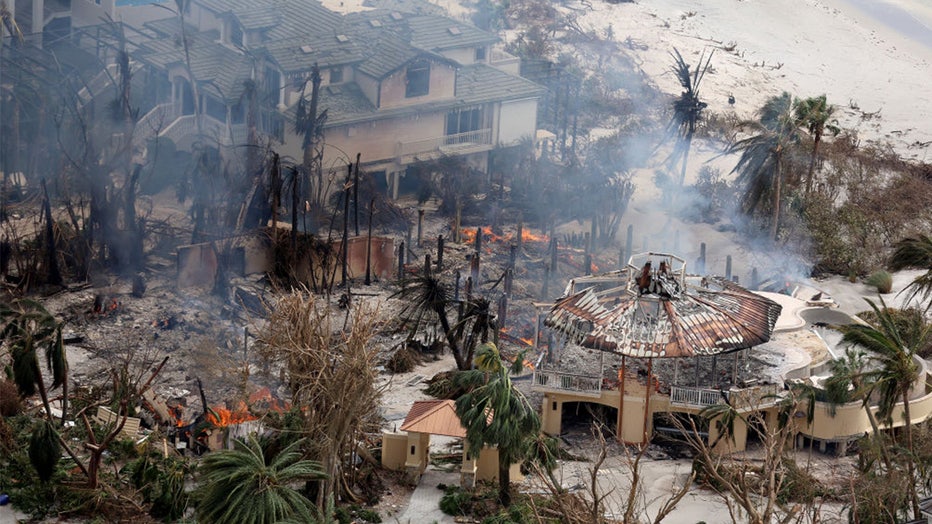 FILE - In this aerial view, a home burns after Hurricane Ian passed through the area on Sept. 29, 2022, in Sanibel, Florida. (Joe Raedle/Getty Images)

As she hung around and waited, first responders began to make their initial round of search and rescue operations. She told them she was fine and to prioritize others in far worse shape. To date, the Florida Medical Examiners Commission reports 68 deaths attributed to Ian. There have been 45 deaths alone in Lee County, including Fort Myers, Cape Coral, and Sanibel and Captiva islands.

"Sanibel Island is unrecognizable as the hometown we left just a few days ago," Sanibel's city manager, Dana Souza, told FOX Weather. "Search and rescue is complete, and the major roads have been made passable, but the extent of the destruction has left the island essentially uninhabitable for the foreseeable future."

There is no electricity, water or sewer, and the process of restoring those services is made more difficult by the destruction of the causeway. 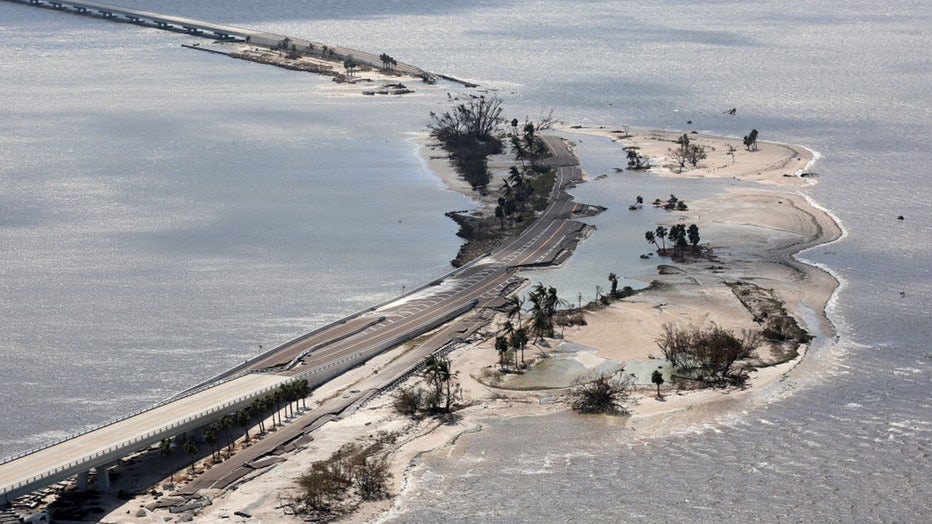 FILE - In this aerial view, parts of Sanibel Causeway are washed away along with sections of the bridge after Hurricane Ian passed through the area on Sept. 29, 2022, in Sanibel, Florida.  ( Joe Raedle/Getty Images)

Cut off from all lines of communication, Regan made her way to the only place to get the word out to her kids that she was alive.

"I finally went to the top of the bridge the following day, the first causeway, because that's where I heard you get cell phone service and told one of (my kids) who got the word out," she said.

And while her condo survived, for the most part, her grandmother’s home was a total loss. She couldn't get through the front door of her ground-level home, so she climbed through a window.

That’s when the reality of the devastation really hit.

"The water (had) went up to the ceiling it, and it was just covered of like two feet of mud, and everything was whipped around," she remembers.

Ian had ransacked the home, tipping the refrigerator, knocking down the cabinets, and even throwing the beds up against the walls like an unwelcome house guest. 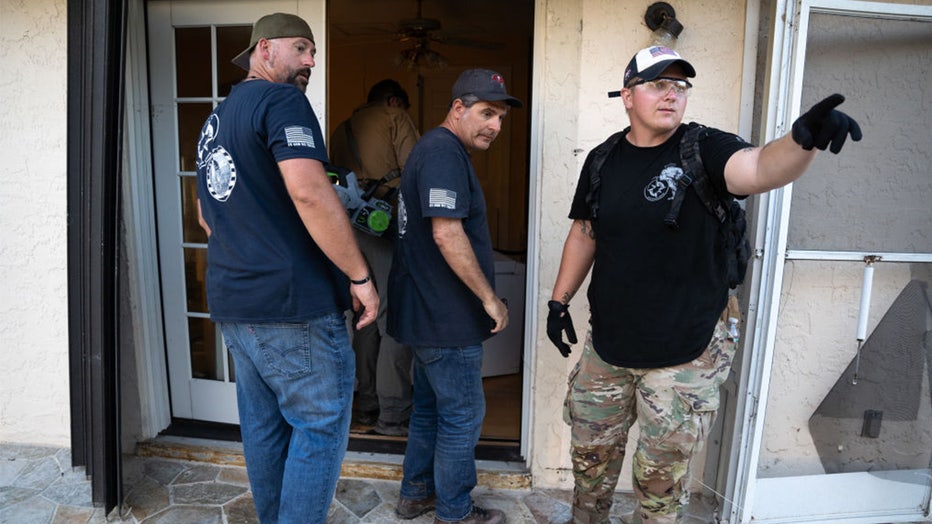 Regan’s grandmother built the house in 1965. She had been going there since she was a child for vacations. As a child, Regan even attended Sanibel Elementary. Only five students were in her second-grade class inside the tiny one-story school.

"It's been in my family," she said. "We've been going there forever."

Soon authorities would tell Regan that she would need to join the more than 1,000 other evacuees on the island and leave the place she once called home.

"I just wanted to stay, to keep working, to try to save the condo and help out my neighbors. But they were insistent that I had to leave," she said.

On Tuesday, nearly a week after the storm had passed, Regan, ironically, was driving to Fort Myers to receive a hurricane re-entry pass to get back onto the island by ferry to continue the cleanup.

"We can't stress enough how dangerous the conditions are there - most buildings sustained major structural damage," Souza said. "Debris - the ruins of destroyed houses made into sharp, unstable, and unhygienic rubble - litters the island." 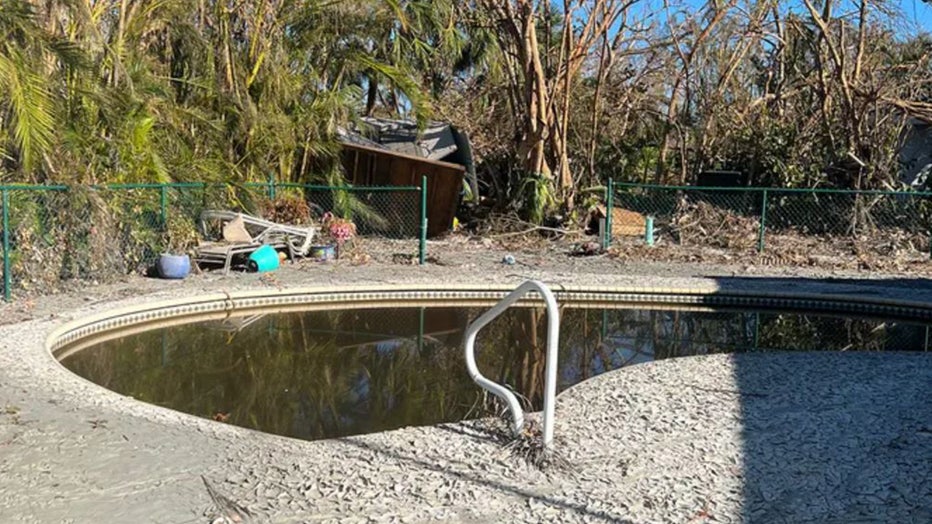 A shed in the back of Lorraine Regan's home on Sanibel Island, Florida, is toppled over as mud covers the pool deck. Her home was a total loss after Ian ransacked her house on Sept. 28, 2022. (Lorraine Regan)

Souza said the catastrophic event will take time to make significant progress, but their progress is steady, and they are making headway.

"If you've seen pictures of Sanibel prior to this hurricane or were lucky enough to visit, you know what a beautiful place it is - some of the most beautiful beaches in the world and a small-town charm quite unlike the high-rises and development in other beach communities in Florida," he said.

Just before Ian had hit, Regan got a job as a recreation director assistant at Sundial Beach Resort & Spa. It was her first week working, she had just refinished her kitchen, and everything in her life was perfect.

Sanibel Island still holds a sentimental place in Regan’s heart. And looking back, she now wishes she would have evacuated.

"I wish I had. And my major regret, the whole entire time, was having my family worry about me," she said.