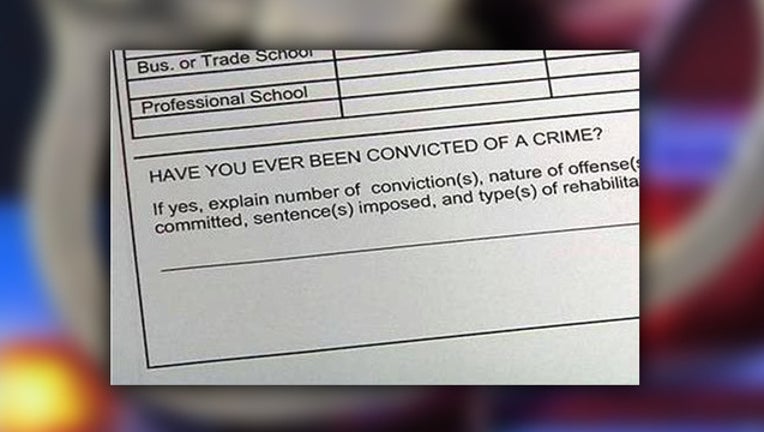 TAMPA (FOX 13) - The federal government will no longer ask job candidates if they've been convicted of a felony on applications.

Over the weekend, President Barack Obama ordered federal agencies to remove the box from all federal job applications.

Andrew Dye, 25, is homeless and a former drug addict. He admits he has been convicted of multiple, non-violent felonies like grand theft.

Of the 150 jobs he's applied for, he has never been offered an interview.

"They say they are going to call you, but they don't," he said.

Records show Dye has been free of arrests in Pinellas County for two years. He is weeks away from completing a GED and is the father to a 5-year-old.

"I have got to support myself before I support him," Dye said.

Yet he, and job application coaches at the St. Petersburg Salvation Army, believe it's egregious for employers to insist applicants check a box that asks if they're a felon.

How can someone reform themselves, they ask, without even getting a job interview, much less a job?

"Look at who they are, and how they are now," said Paul Fuller, the area director for the Salvation Army. "My hope is that with the federal government taking action, this becomes a basic principle across our society."

Fuller said of the 100 job-seekers the Salvation Army helps each week with applications, the majority of them have to check the 'yes' box.

Fuller's team often asks prospective employers to at least meet applicants, instead of rejecting someone with a criminal history off the bat.

"We do hope that people will give people a chance beyond a simple check in a box," said Fuller.

Dye says looking beyond the box is the only way he'll ever get work.

"That was so long ago, when I did those crimes," Dye said.

The city of St. Petersburg bans city agencies from asking about criminal history before an interview.

Tampa requires its contractors to say whether they ask about criminal records on their own applications.