Pointing to a need to minimize the amount of time students are removed from in-person learning, the Florida Department of Health issued a revised rule that gives parents more authority to decide whether children go to school after being exposed to COVID.

TALLAHASSEE, Fla. - The U.S. Department of Education announced Thursday that it has provided nearly $150,000 to the Alachua County School Board to cover a state penalty targeting board members’ salaries.

State Education Commissioner Richard Corcoran announced Aug. 30 that the Florida Department of Education had started to withhold funds from the Alachua and Broward County school districts in amounts equal to the monthly salaries of school board members who voted for student mask requirements.

Four Alachua board members voted to require students to wear masks during the COVID-19 pandemic, with exceptions only for students whose parents submit doctors’ notes. The state has withheld two months’ worth of pay for the four board members "so far," according to a statement Thursday from the Alachua district.

The federal education department said the $147,719 provided to Alachua is the first grant under what it is calling Project SAFE, or Project to Support America’s Families and Educators. The grant is the latest development in a feud between the federal and state governments over mask policies in public schools.

"We should be thanking districts for using proven strategies that will keep schools open and safe, not punishing them. We stand with the dedicated educators in Alachua and across the country doing the right thing to protect their school communities, and with today’s first-ever award under Project SAFE, we are further enabling educators to continue that critical work," U.S. Secretary of Education Miguel Cardona said in a prepared statement. 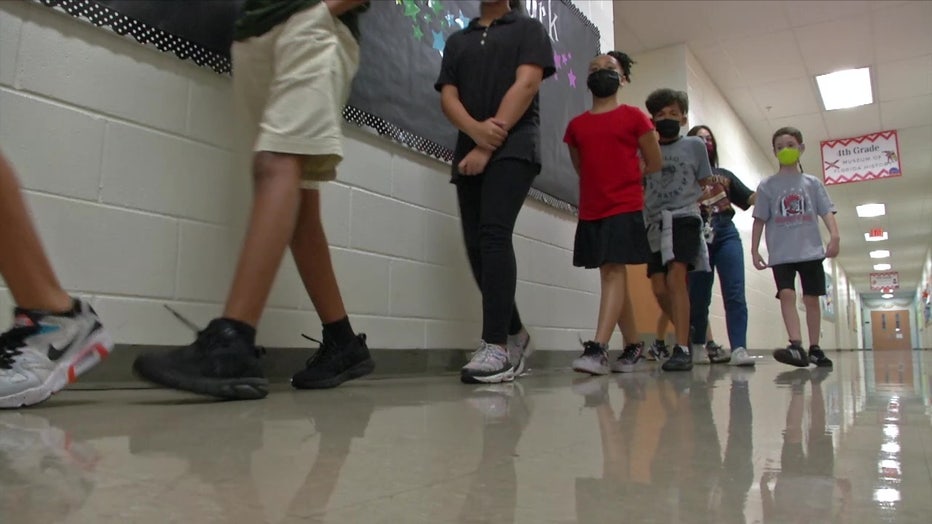 "Just a couple of months ago, the Biden Administration said that Florida would be violating federal requirements by providing $1,000 bonuses to teachers and principals. Therefore, it’s ironic that the federal government is now using taxpayer funding for education to pay the salaries of elected school board members, who made the decision to violate the law because they don’t believe parents have a right to choose what’s best for their children," Pushaw told The News Service of Florida.

DeSantis’ executive order on masks has spurred legal challenges. One lawsuit, filed by a group of parents, is awaiting a hearing at the 1st District Court of Appeal, after a Leon County circuit judge ruled that DeSantis overstepped his constitutional authority in the order.

While the federal government looks to pick up the tab for school districts getting dinged financially, the state Department of Health on Wednesday tightened a rule regarding masks in schools.

The Department of Health issued a revised rule that says opting out of mask requirements is "at the parent or legal guardian’s sole discretion." That change is targeted at districts, such as Alachua, that have required doctors’ notes to opt out of mask mandates.

The Alachua school district plans to keep its student mask requirement in place regardless of the state’s updated rule.

"At this point, we are maintaining our current protocols," district spokeswoman Jackie Johnson told the News Service on Thursday.

"I’m very grateful to Mr. Cardona, President Biden and the federal government for the funding. But I’m even more grateful for their continued support and encouragement of our efforts to protect students and staff and to keep our schools open for in-person learning," Simon said.