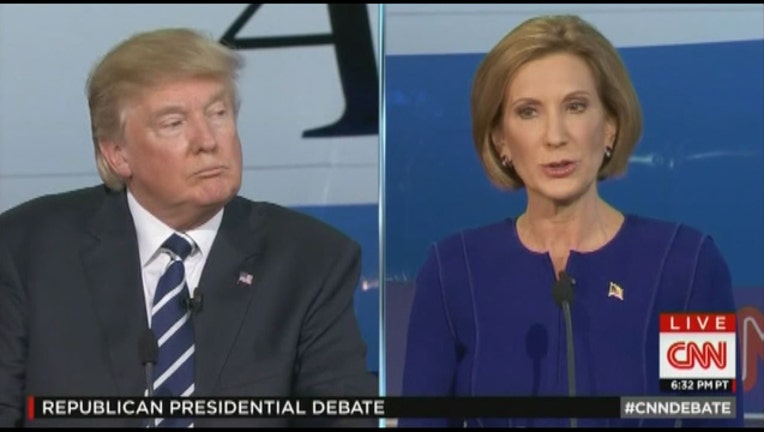 Carly Fiorina wasn't even supposed to be on stage and yet in many ways she dominated it — especially in the debate's first hour. CNN revised its rules and added an 11th podium so that the former chief executive of Hewlett-Packard could take part in the main event after her strong performance during the first undercard debate last month.

Fiorina made her mark as one of the strongest foils to Trump, who has led Republican presidential preference polls throughout the summer. She sharply outlined her approach to foreign policy and engagement with Russia, citing the importance of knowing the name of General Qassem Suleimani, the commander of the Quds Force, an elite military unit in Iran. Trump hadn't known his name in an interview a few weeks ago.

In another exchange, she turned Trump's own words into a retort of his insult about her personal appearance, after he called out former Florida Gov. Jeb Bush for trying to walk back comments he'd made about not needing to fund women's health care.

It was a quip that drew the night's first loud ovation from the audience at the Reagan library.

Fiorina's impact faded during the debate, which went on for three hours, but she commanded the first half — when the television audience was likely the most engaged.

Bush led the crowd on stage when it came to the Trump-thumping. Early in the debate, Trump looked at Bush and said, "More energy tonight, I like that." It was a jab at a candidate he's repeatedly called "low energy."

Trump has contended that Bush and others are "puppets" of their big donors. Bush said on stage that only one donor had ever sought favors from him: Trump. He said the billionaire real-estate mogul once followed up his political donations with a request for help to expand casino gambling in Florida.

Bush also called on Trump to apologize for attacking the background of his wife. Columba Bush is an American citizen born in Mexico. Trump has suggested that Bush is too soft toward immigrants because of his marriage.

And late in the debate, when Trump said he was the only one on the stage to oppose the 2003 war on Iraq, Bush seized the opportunity to outline some of his foreign policy plans — and defend his brother, former President George W. Bush.

"Your brother and your brother's administration gave us Barack Obama," Trump said. Bush stopped cold and looked directly at Trump, saying, "You know what? As it relates to my brother, he kept us safe."

It's not a new line for Bush, but it earned him some of his biggest applause of the event.

While the first debate last month opened with a political bang — Trump raised his hand to say he wouldn't commit to running as a Republican — this time the candidates had plenty of time to discuss policy. Candidates touched on Iran and Syria, immigration, taxes, gun control — even vaccines.

Kentucky Sen. Rand Paul used the opportunity to refocus his energy on his libertarian base. Striking a different tone than the rest of the field on the nuclear deal with Iran, Paul said that while he didn't like it, it would be "absurd" to tear up the agreement as other candidates have said they'd do if elected president.

Later, he returned to the theme: "There will always be a Bush or Clinton for you if you want to go back to Iraq."

Rubio and New Jersey Gov. Chris Christie elbowed their way into the spotlight, making the most of their time to answer questions.

In addition to using his time to talk about immigration policy and summarize his family's Cuban heritage, Rubio talked extensively about foreign policy. He rattled off a list of threats: North Korean missiles, Russian incursions into the Ukraine, and Chinese cyberattacks. He said people need to ask candidates like Trump about foreign policy because "these are extraordinarily dangerous times."

"You better be able to lead our country on the first day, not six months from now, not a year from now," Rubio said. "On the first day in office, our president could very well confront a national security crisis. You can't predict it, sometimes you can't control it."

Christie captured the audience when he tweaked both Trump and Fiorina for their back-and-forth over resumes. Fiorina was fired. Trump has declared bankruptcy. Christie said Americans don't care.

"While I'm as entertained as anyone by this personal back-and-forth about the history of Donald and Carly's career," he said, "for the 55-year-old construction worker out in that audience tonight who doesn't have a job, who can't fund his child's education — I gotta tell you the truth — they could care less about your careers."

FIGHTING FOR ATTENTION ON A CROWDED STAGE

With a record number of debate participants, they couldn't all stand out. Even during a debate that sprawled over three hours, there wasn't enough time for everyone to make a mark.

That left some of the candidate to stretch out their arms as if schoolchildren trying to get their teacher's attention. At times, several cried out, "Jake, Jake, Jake!" as they tried to win the favor of CNN moderator Jake Tapper.

Some candidates disappeared for long stretches of the event. Wisconsin Gov. Scott Walker seemed to be fighting for airtime. Mild-mannered former neurosurgeon Ben Carson, a political novice, said he doesn't "lick the boots of billionaires" in one of his rare standout moments.

When a moderator tried to cut off former Arkansas Gov. Mike Huckabee, he huffed, "I'm going to take just what little I can."